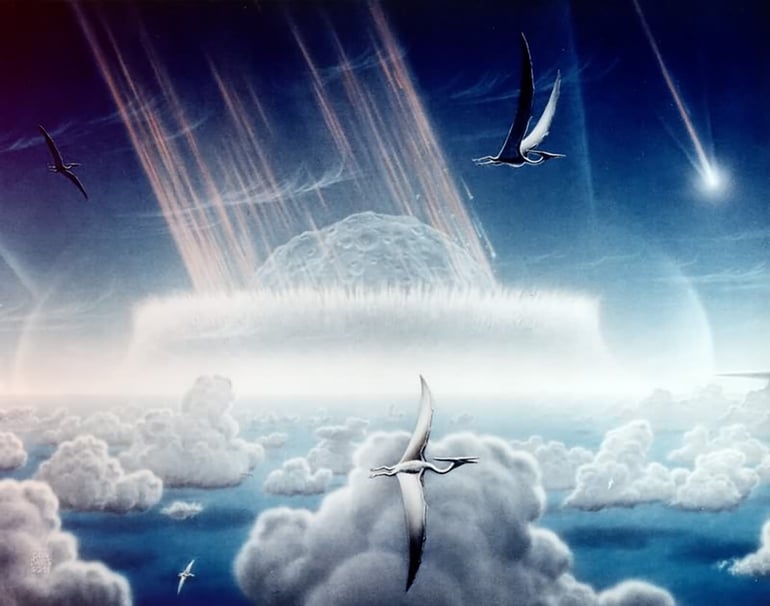 This is the beginning of the end for wireless audio in UHF.

But about the dinosaur picture.

This is an artist’s interpretation of Pteranodontidae soaring through the clouds, jubilant and free, 66 million years ago, as an asteroid with a diameter of 6 miles and velocity of 12.4 miles per second impacts shallow seabed near what is now Mexico’s Yucatán Peninsula.

You know what happens next…

WHOA. Maybe not that. But still something bad; The asteroid lays instant and epochrophal* waste to thousands of square kilometers surrounding the point of impact, triggers a tsunami 1000 meters high, and, after a dense cloud of particles blankets the earth’s atmosphere and blots out the sun, slowly, over a period of years, suffocates 75% of all species to extinction.

The rock that killed the dinosaurs.

If the metaphor I’m making is that the incentive auction is the asteroid that killed the dinosaurs, what (or who) are the dinosaurs killed by the auctions? And how much time do they have left?

Yesterday, one of the most ambitious projects in the history of the United States Federal Communications Commission began its long journey to reclaim public UHF spectrum for private providers of wireless broadband, simulating the coverage and interference patterns of remaining licenses, and reselling relinquished licenses to an audience of well-financed bidders, the spectrum between 566 MHz and 698 MHz.

In most densely populated areas, most to all of that spectrum—566-698 MHz—will, eventually (but not immediately), if the auction has a successful outcome, become unavailable to every low-power wireless audio device user and licensee.

You can follow along with bidding here. It appears as if nothing has happened (which is why I’m not too upset about debuting this post a day late), but things are happening, and the auction is still on. Check that page in a few days.

Currently, we only know there are enough participants to mathematically meet the 126 MHz target. We do not know how many participating licensees there are, or their identities, or how or if they will continue to participate.

There are 99 bidders who will bid in the second stage of the auction. Although anonymous, for now, guaranteed among those 99 are Verizon, ATT, and T-Mobile.

In this stage owners of television stations are (prepare for confusion) bidding to accept a price for something they already own—their 6 MHz broadcast licenses. The opening bids in this stage are set by the FCC, and set as high as possible. First stage bidders accept or reject the price offered for their license in each round, and (I do get confused here) I believe second stage bidders communicate to the FCC system whether they believe that price is adequately valued, and second stage bidders agree or disagree with the bid.

Since it is not possible for bids to go higher in price, only lower, first stage bidders are likely to accept the opening bids and many rounds of subsequent bids, since the bids start high and go down. In each round the bid price is lowered until buyer and seller agree, and hence this stage is called the “reverse” stage. Reverse stage bidders (broadcast station licensees) are interacting with a private auction system that allows them to commit to a bid. But to the best of my knowledge we will not see any of the details until the second stage or later: for now, only a summary.

In the second, “forward” stage, 99 auction participants start bidding on the licenses licensees in the reverse stage relinquished, at a certain price, the price they (original licensees) will receive in the form of an FCC check. The 99 bidders then duke it out in the forward stage, as in regular round to round price increase ("forward") auctions. Once the forward stage is concluded, the difference between the bid price accepted by licensees, and the final bid price paid by forward stage bidders is what the FCC nets out—how much they can boast to Congress that they were able to deposit in the treasury—minus a few billion for repacking remaining broadcasters, and a hundred million here and there for other projects in the public interest.

So, even if I got a few hair-splitting details wrong there, this is happening.

Grumbling is inevitable. We should all pause here for some grumbling.

Boy, that was cathartic.

Now time to get real.

Grumbling does not moisten ink of federal law that dried long ago.

Unfortunately, at this point in time, all of the energy expended in grumbling, in fuming, in cursing the FCC and Obama and big government and big telco, all of that energy is wasted energy, because it accomplishes no work.

The ship that carries the voices of disgruntled citizens and displaced pro audio equipment owners to the House, Congress, and FCC, has long since sailed. And it ain’t sailing back.

Instead, the wireless audio community may be better served to acknowledge reality and transfer that energy into work: into action: into using the remaining UHF spectrum in the most efficient ways possible so we can continue doing what we do.

For most, if we want to use the same number of channels, this will require learning new techniques, and adding new tools to our toolboxes. In years ahead, we’ll need all the skills we can learn, and all of the tools we can find. I have written and drawn and animated about those tools and techniques before and I will write about them again, with increased urgency, in months to come.

The Best Part of the Bad News

We can’t escape that UHF is about to get crazy.

Though there is a silver lining.

The eviction of wireless audio users after the auction will be gradual and slow, and the Commission has opened additional spectrum elsewhere for licensed users.

How long do we have?

That’s not an easy question to answer. Some of the details can be found here, and hinge on when a winning bidder “commences operations” on purchased spectrum.

I have heard estimates that operations will commence between one to 20 years from the conclusion of the auction.

Licensed users will be granted a “Transition period” of 39 months, which is more than three years, while concurrently additional spectrum is opened up for Part 90, 74, STA, etc licensed users. I am unsure as to whether the 39 month transition period also includes unlicensed Part 15 users.

The incentive auctions will many months to conclude. After they conclude, it should be business as usual for wireless audio for at least one year for unlicensed users, and more than three years for licensed users.

Some users will also get lucky. Their spectrum may not be sold. Or, the winning bidders may not commence operations for many years.

As I wrote a few weeks ago, in most major markets (LA, NYC, etc), and possibly a majority of the geographic area of the US, the amount of UHF spectrum available for wireless audio will be reduced by 60%.

That is pretty bad, on its own.

Yet that is only the percentage of spectrum lost. There are other factors that could make remaining spectrum much more difficult to work with.

Spectrum in a given market may be legal, but not useful, because it is occupied by other licensed and unlicensed devices and DTV stations, or contaminated with noise.

Or, it is possible that wireless audio operators, even though they still have the right to operate over 96 MHz between 470-566 MHz, may find that spectrum so crowded to render it impossible to use.

There are two primary factors contributing to this possibility:

And there is a third factor: us.

Wireless microphones, IEMs, comms, and so forth, have up to 60% less bandwidth to coordinate frequencies across, as well as the aforementioned complications that hinder usability of remaining legal spectrum.

Whether we like it or not, we now embark on our own grassroots repacking saga, where we'll learn how to do more with less—or go extinct.

*"Epochrophal" doesn't seem to be in the dictionary. But it should be.