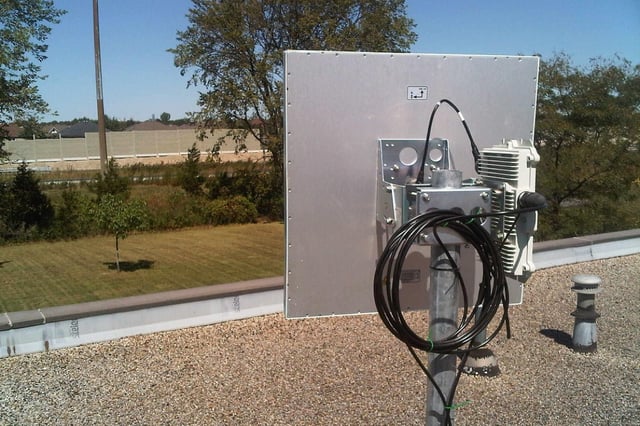 TVBDs might push wireless microphones out of the UHF whitespaces. This post covers what they are, where they operate, and why they cause interference to microphones.

[A TV band device ( TVBD) is essentially the same thing as a white space device (WSD). They will be referred to as TVBDs in this article.]

[UPDATE: The FCC is now referring to TVBDs as WSDs, white space devices, which I guess means "TVBD" as a term is obsolete.]

What is a TV Band Device/White Space Device?

In the United States, TV band devices are intelligent, fixed or mobile radios that transmit and receive information on unused portions of the TV band, between 54-698 MHz--the same frequency range that professional wireless microphones use. They employ a database to determine which frequencies are safe to occupy. There is no single device that will be *the* TV band device, rather, many technologies that exist today will undergo certification to utilize television white spaces and become TVBDs.

They come in two categories: fixed and portable. Fixed TVBDs will be used as “super Wi-Fi” routers that can distribute wireless internet over a much larger area to many more people than conventional 2.4 GHz Wi-Fi routers can manage. There are a few of these fixed networks in operation right now. Portable TVBDs will likely include laptops and smartphones, but the possibilities are endless. Things will get really interesting if and when portable TVBDs use spectrum to communicate with one another, instead of to some central antenna or gateway.

Fixed TVBDs may emit one watt of evenly radiated power, or four watts of focused power (EIRP). Portable TVBDs are allowed 100 mW (2X the power of a mic), or 40 mW if they operate on a channel adjacent to an occupied TV channel. Fixed TVBDs are allowed to transmit in both the VHF and UHF portions of the broadcast band: 54-60 MHz, 76-88 MHz, 174-216 MHz, and 470-698 MHz, except on channels adjacent to occupied channels above 512 MHz. Mobile/personal TVBDs will operate only between 512-698 MHz, except for channel 37, which is reserved for radioastronomy, and they also will be excluded from the two channels above and below channel 37 which are set aside for wireless microphones.

Originally, the FCC required that TVBDs be able to sense all incumbent users and avoid them. Wireless microphone signals are faint, and discriminating between real signals, noise, and noise from adjacent television channels is very difficult. Laboratory tests were conducted in 2008 that showed TVBDs could detect microphones, but not reliably so when the frequencies were next to occupied TV channels. Real world tests were also conducted with some early prototype devices from Microsoft and Philips. The results were not promising. ESPN and the NFL volunteered to simulate game day use of wireless microphones at Fedex Field while the prototypes attempted to sense and avoid the microphones. The Philips device always thought a channel was occupied with a microphone (whether it actually was or not), and the Microsoft device fared no better than chance.

In September of 2010, the FCC issued decisions on seventeen petitions filed from various parties on the scope and capabilities of TVBDs. This ruling, Second Memorandum Opinion and Order, set aside two reserve channels above and below channel 37 for wireless microphones, but eliminated the requirement that TVBDs attempt to sense and avoid wireless microphones. The reserve channels were a step in the right direction, but the elimination of sensing requirements dealt a very heavy blow to wireless audio. To the best of my knowledge, the Second Memorandum contains the definition that TVBDs are using now.

But how could the FCC make this decision when they know how many people and businesses use wireless microphones?

The decision was based on the following logic:

1. Unlicensed wireless microphones are unlicensed, Part 15, Low Power Auxiliary Devices. As such, they must not cause harmful interference to authorized services, and they must accept any interference received. This is the slogan emblazoned on the bottom of every one of your microphones. And they mean it. But aren’t TVBD’s also unlicensed devices? Yes, but, from page 25 of the Second Memorandum:

Although there are hundreds of thousands to millions of 470-698 MHz mics out there right now, there could be millions of TVBDs in just a few years, and Tom Wheeler's FCC has supportive of unlicensed opportunities for broadband connectivity.

2. Important events using wireless microphones run by qualified operators may register wireless microphones, both part 15 and part 74, on a database that protects them from interference from TVBDs. This gets around the problem of having wireless microphones cut out when important people are holding them, like the president or Shakira, while lots of people are watching. But it does not protect 99% of the population of wireless microphone users who are not eligible to register for the database. [UPDATE: We have recently found that anyone who uses more than 30 channels of wireless may be eligible to apply for TVBD interference protection. We strongly suggest anyone who runs lots of channels and is worried about TVBDs take a look at this article.] The eligibility criteria for Part 74 licensure has also [been greatly expanded](http://blog.rfvenue.com/the-time-to-get-licensed-is-now/).

3. Two channels above and below channel 37 are set aside as the exclusive domain of wireless microphones, and portable TVBDs will not be allowed to transmit in the VHF range. Various protestations from wireless audio manufacturers include “two channels are not enough” and, “VHF is garbage and there are almost no microphones that use this range anymore.” Debate on these two topics is ongoing.

And that is one upside; all of this is ongoing. Regulations can still be modified, and widespread adoption of TVBDs is a few years away. The incentive auctions aren’t even set to begin for a year and a half. Sensing technology could dramatically improve in that time. In fact, cognitive radios are perfect candidates for split-second regulation changes--because they are able to wirelessly receive new instructions on how to operate from the database at any time.

Unfortunately, the companies that have the most to gain from TVBDs--so called “edge provider” tech firms like Google and Microsoft--are at odds with those that have the most to lose--like Shure, Sennheiser, and over the air broadcasters. Since the reliable detection of wireless microphone signals will add additional cost to white space devices, the former attempt to minimize or eliminate those legal requirements which  compel TVBDs to sense unlicensed microphones used by the latter.

Unlicensed microphone are also allowed to register for interference protection on a database, but there are about one hundred footnotes attached to that statement that assure almost everyone who is using an unlicensed mic is not actually allowed to register. There are a lot of interesting things to talk about surrounding unlicensed microphone registration, as well as why large technology companies are so interested in whitespaces when there is already reliable and speedy infrastructure that supports mobile connectivity. And I hope to get to both of them this week. [Update: I got to one of them this week.]