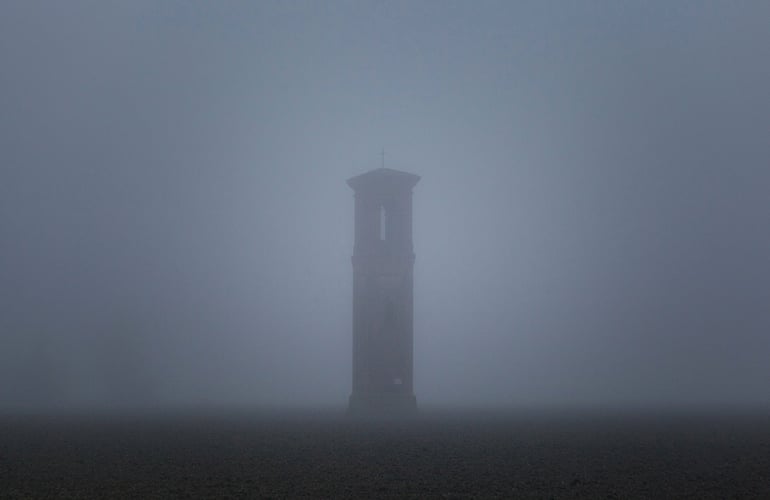 [CORRECTION: this article previously claimed a reduction of 70% of bandwidth, not 60%. And current bandwidth as 288 MHz, not 228. The error was caused by shamelessly sloppy arithmetic.]

For years, the wireless audio community in the United States has asked a question that could not be answered with available information: how much spectrum will the incentive auctions remove from the UHF broadcast band?

That’s right. UHF channels 30 and above? You might need to kiss goodbye (once the repack is complete, the grace period is over, and “operations” have commenced).

Why 126 MHz and not some other amount? For answers, you have two options: read this brain-imploding Public Notice (at least 40% footnotes and includes such riveting subsection figure captions as “Portion of $900 Per-volume Opening Base Clock Price for Intermediate Moves”), or look at this picture:

This is a list of 11 possible targets simulated last year. The final clearing scenario target selected by the Commission is the third from the top. You can clearly see everything channel 29 and above is targeted for reclamation, with the exception of channel 37, which is used for radio-astronomy and out-of-bounds already. The shaded grey areas are the much disputed guard bands and duplex gaps, which exist to protect tier-one broadband services from interference, and uplink and downlink broadband service blocks from interfering with one another.

Of the 11 scenarios originally calculated by the Task Force, this scenario reclaims the third most amount of spectrum. In other words, things could not have turned out much worse.

(Although I’m not surprised. Many of the academic experts I’ve contacted since launching the blog suggested the 126 MHz target was the most likely, for several technical and economic reasons.) 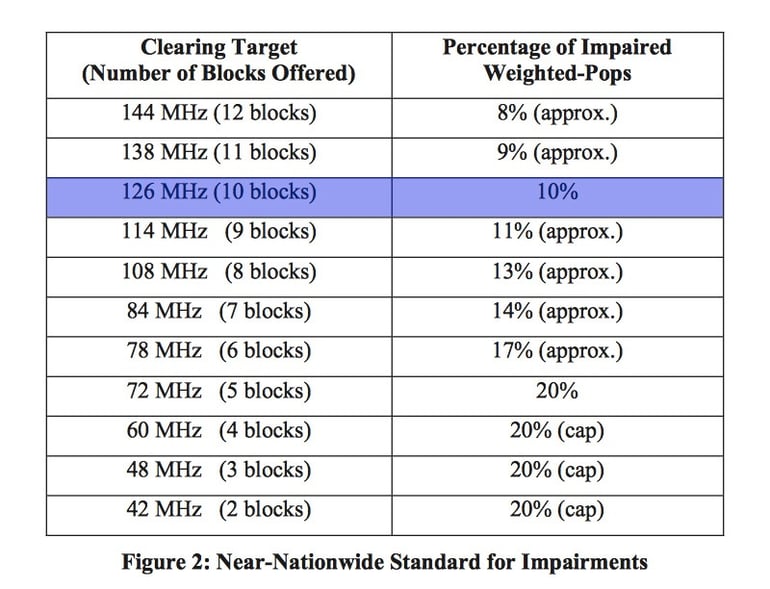 Although the repack will take considerable time (wireless microphones and other audio devices will not be evicted on May 31st), there is no place to hide from the chilling reality that the wireless audio community is likely going from 228 MHz in UHF to only 96 MHz in most areas—along with an unknown caliber of congestion due to repacked UHF TV stations, and the rollout of TVBD/WSDs (link from 2014, but still mostly correct). The ATBA has a more timely (and opinionated) take on TVBD use here.

We don’t know how many TV stations are going to be repacked because the identities of stations who opted to participate, and therefore by default those who will not participate (who will be repacked whether they like it or not), are closely guarded secrets that will not be known until after the auctions are complete.

Further, 126 MHz is a “target,” not a mandate set in stone. It is possible that there will be insufficient supply or demand to meet this target. It is possible that certain geographic regions of the country will see less of that 126 MHz reclaimed due to conflicting coverage areas or buyer/seller mismatch, international coverage areas from stations near the borders of Canada and Mexico, and/or decisions in the extraordinarily complex software that will execute the auctions, calculate “impairments,” and do much of the heavy lifting of determining which stations are repacked, where (which, the software I mean, I admit I have almost no comprehension of). Finally, although unlikely, it is also possible that the auction could fail, and be postponed or cancelled altogether, but don’t count on it.

The 126 MHz target the FCC released last week was not determined on a whim. It is the product of research and abundant data the FCC spent years to retrieve and study, and feverishly so in the past few months at that, since broadcasters who have opted in are now known internally, as are participating bidders. The set target is anything but arbitrary. The Incentive Auction Task Force worked incredibly hard, using real data, to arrive at this scenario, and the Commission in vested power stands behind it with might.

Although we can’t say for 100%, absolute, pinky-swear certain that 126 MHz will be recovered in every market, we will say this is the without a doubt the most likely prediction we’ve ever had—and it’s happening at the end of this month.

It is in your best interest to assume and plan for a new UHF band that is between 470-566 MHz.

That means that in markets where the full target is recovered, all equipment with a tuning range above 566 MHz will, eventually, be illegal to operate, because it will use frequencies owned by the winning bidders of the incentive auctions.

The incentive auctions are here. Now.

Even though wireless audio devices will, depending on what part of the country they’re used in and the operating rights of users, still be legal for some time (perhaps for a period of years), and even though inevitably some areas will lose fewer than 126 MHz, we must prepare for the worst as soon as possible, and hope for the best all the while.

Anything less throws caution—and whatever scraps of UHF spectrum remain—to the wind.