In November the UK’s FCC equivalent, OFCOM (Office of Communications), released a report on the impact of white space devices (WSD/TVBD is now synonymous) on wireless microphones in theatrical environments. The test was thorough and valid, and gives US based operators intelligence on the forthcoming changes WSDs might bring to the spectrum here. {For a refresher on what WSDs are and why they matter, check this out}

Way back in 2007 and 2008, the OET’s Technical Research Branch conducted studies on WSDs' ability to sense DTV and wireless microphone signals using Adaptrum, Microsoft, Infocomm(I2R), Motorola, and Philips prototypes in laboratory and field settings. The researchers collaborated with the NFL, ESPN, and Broadway theaters. The results revealed that WSDs are not very good at sensing wireless mics:

In any case, the pending rules will most likely allow Part 74 users to register devices in a database for exclusive use, which will in turn inform local WSDs to stay off of those registered frequencies, whether the WSD senses them or not. Unlicensed users have more to worry about, although licensed users are far from safe.

What professionals really want to know is whether nearby WSDs will interfere with wireless microphones, either on the same frequency or different frequencies, and to what degree. To the best of my knowledge the FCC never initiated any studies to investigate these concerns, so the recent paper from OFCOM provides important intelligence as the wireless audio industry struggles to predict the impact of WSDs.

Tests were performed during live events, in empty venues, and under controlled laboratory conditions. Venues included the Queen’s Theatre, the New London Theatre, and a broadcast event. Microphone signal levels were examined during live shows (with WSDs safely off), and microphone signal levels and subjective listening tests in the prescence of WSD signals were conducted during rehearsals, when theaters were empty, as well as during a special performance of the ‘Les Miserables’ mounted especially for OFCOM engineers. 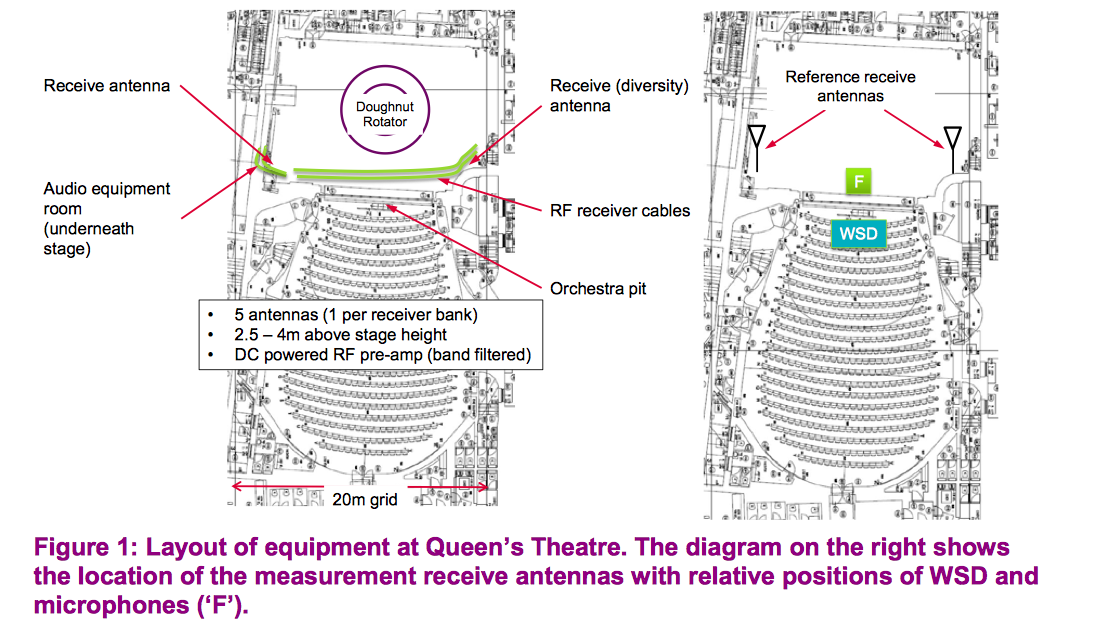 Engineers monitored audio for degradation during performances, and then on recordings of the performance on headphones and found “no reduction in audio quality” created by WSDs operating on 1st adjacent, 2nd, 3rd, and 11th TV channels transmitting at a power of just under 1 W EIRP (although they were able to create 1st adjacent channel interference under one circumstance when the WSD transmit at 4 W EIRP, pointed right at a microphone receiver, with the microphone at maximum range - a worst case scenario.)

This is good news. WSD signals and IMD products do not appear to spill over into adjacent channels enough to cause dropouts or detectable audio degradation. Those who register frequencies in the white space database are unlikely to encounter interference, except for certain worst case scenarios.

However, when a WSD transmitted on the same TV channel as wireless microphones, mic receivers experienced devastating co-channel interference.

This is bad news. Since we know from the 2008 FCC study that US based WSDs are unable and will not be required to sense wireless microphones, WSDs are free to operate on any white space channel not registered by a Part 74 device with wanton disregard for cohabitants. Unlicensed users will be particularly vulnerable to WSD interference since they cannot register for protection in the database.