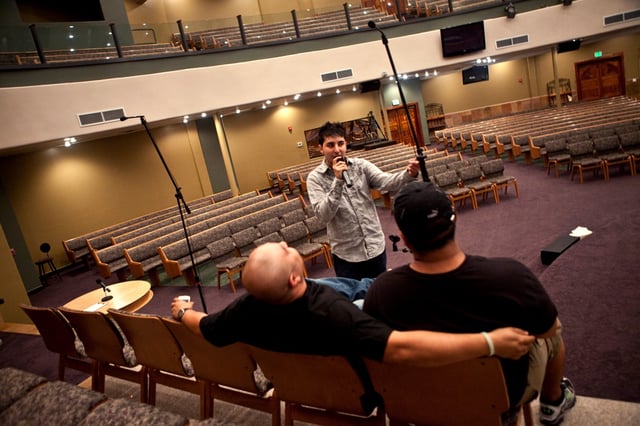 This article is for technicians at smaller churches who buy and install their own wireless audio gear. We know you’ve got a lot on your plate, so we want to cover the five mistakes that, in our experience, are the biggest impediments to worship users getting clean, interference-free performance from their microphones.

Frequency coordination is the careful spacing of wireless channels so they do not interfere with one another. Coordination is more than putting each microphone on its own frequency. Those frequencies must be far enough apart, and non-microphone signals accounted for and avoided.

A safe minimum distance of no less than 1 MHz should be placed between each microphone. Spacing channels an even distance of 1 MHz apart, however, risks creating harmful intermodulation products. Before beginning, a quick scan should be done with a receiver to check for signals from other wireless devices in the area, along with a search on a TV channel database (more on TVs below). Coordinating a large number of microphones, or spacing channels close together without risking interference requires a spectrum analyzer and intermodulation software such as IAS.

The FCC prohibits all wireless microphones from operating on the same channel as over-the-air television stations. A TV channel is not the same as a frequency. TV channels are 6 MHz wide. They extend 3 MHz on either side of a station’s center frequency.

Microphone signals are unlikely to harm a TV signal, since TV transmitters are much more powerful. Even so, operating a wireless device on illegal frequencies could have real consequences, just like it says in your manual. And with the new digital TV standards, operating anywhere inside the 6 MHz of a nearby DTV channel almost guarantees audible interference.

Multi-path interference is the official word for radio “dead spots” that develop when different parts of a radio signal arrive at the receiver at different times. Multi-path happens when different parts of the wave bounce off of surfaces and take different length paths to a destination. Churches are the perfect place for multi-path interference. They are large rooms filled with sparsely decorated, flat, reflective services made from metal, hard wood, vinyl, or plaster.

If your priest or pastor’s microphone goes dead in a certain spot on the stage, multi-path is almost certainly the culprit. If possible, try moving the receiver a few feet to the left or right, and then have someone walk with the microphone across the stage to test the improvement. If that doesn’t work, or the receiver is fixed in place, switch to two external paddle antennas and adjust the spacing until the dead spot disappears. You can also use a single cross-polarized antenna.

If your church has a praise band or choir, or does theater or group discussions on stage, you probably have a good number of microphones. You might be using the standard whip antennas all together on a rack.

This is called “antenna farming,” and it is not ideal. Packing so many antennas together in a small space increases the likelihood of intermodulation and other types of interference problems. All of these antennas can be replaced by a pair of directional antennas by using an RF distribution box. A distribution box pulls different signals coming through one antenna source and sends them to different receivers.

A common reaction to low signal strength is trying to increase antenna gain by purchasing one of these accessories. “Active” antennas do not increase antenna gain or microphone transmission power. They are passive antennas with built-in preamplifiers. If used incorrectly, preamplifiers can introduce unwanted noise into the system, overload the receiver’s front end, or increase intermodulation products. We do not recommend using active antennas or in-line preamplifiers because managing the gain structure is neccessary to avoid unwanted side effects.

If you have low signal, move the receiver as close to the microphone as possible. If the receiver is in a permanent location, use directional antennas to focus a selective beam of coverage on the stage. Also remember that signal loss is proportional to the length of coaxial cable between the receiver and antenna. 100 feet of RG8X coax will lower UHF gain by 9.7 dB. The same length of cable used with a 2.4 GHz microphone (like those from Line 6), will lower signal as much as 21.5 dB.