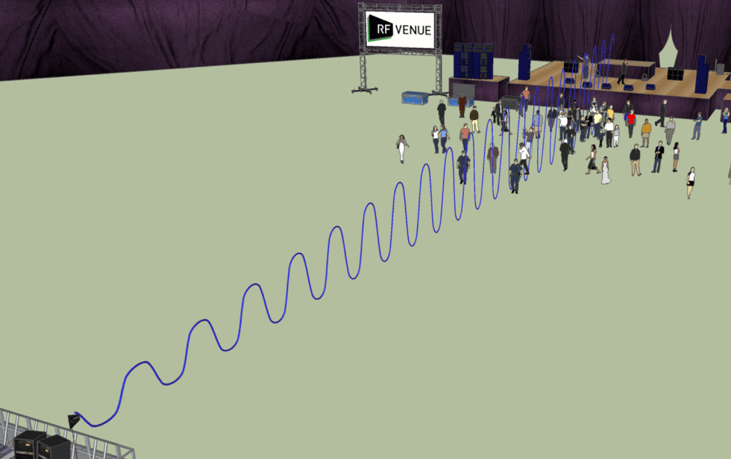 In a past blog we discussed the differences between polarization, polar patterns and polarity.  I believe polar patterns and polarity are generally understood as they are also common in the world of audio. But Polarization as it refers to antennas and therefore wireless mic operation is a much less understood topic so that’s where we’ll dive in today.

As you all know, an antenna is a transducer that converts RF current into electromagnetic waves and then radiates or receives them. RF waves are comprised of both an electrical and a magnetic component. There are generally three main types of polarization, linear (either horizontal or vertical) and circular. For our purposes today let’s consider only vertical and horizontal polarization as circular generally takes care of itself in the world of wireless microphones. More info on circular polarization in this post.

Keeping it simple so we don’t have to get out our physics books let’s just think about a whip antenna (although with a little more thought you can also see how this applies to paddles and other types). When the whip is vertical the polarization is considered to be vertical and if you bend it 90 degrees to horizontal you get horizontal polarization. The polarization follows the electrical field component that is radiating from the antenna. For maximum efficiency the receiving antenna needs to match the polarization of the transmitting antenna. 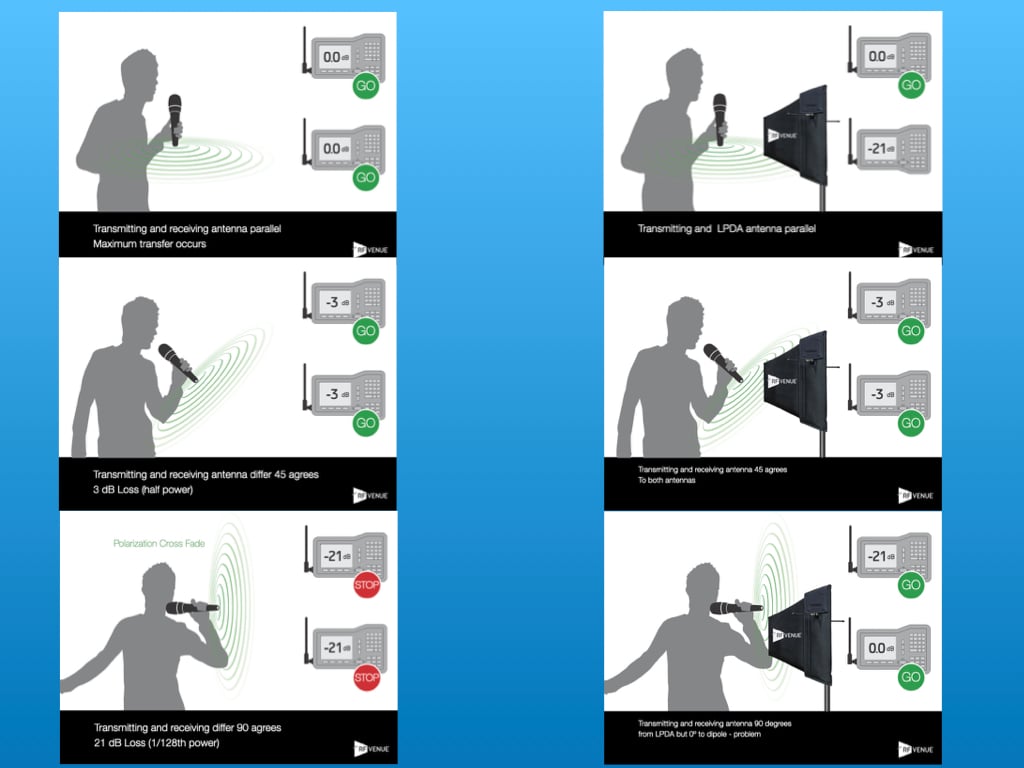 Simply, if your mic is straight up and down and your whip is straight up and down you will get maximum reception. But if your mic gets tilted 45 degrees you will likely lose half of your signal strength (-3dB) and as you continue to tilt it you end up in a situation called “cross-polarization". When a cross fade polarization occurs, your receivers can lose anywhere from 10 to 30dB of the available signal … in other words, you just dropped out.

If that doesn’t quite sink in think about your polarized sunglasses as light waves are similarly polarized. As you tilt the sunglasses they get darker and begin to block out reflections as those reflections are out of polarization like the mic described above.

Well to prevent that, I’ll just keep my mics and antennas in the proper orientation. That might sound simple, but if you are inside a structure (or near one) you get a bunch of reflections because the energy coming from your transmitter’s antenna is basically emanating in all directions at once with a lot of added bouncing. You know this as “multi-path”. And whenever a full reflection occurs (such as bouncing off anything metal) full polarity reversal results.

In some cases the direct signal may be obstructed by a set piece or by members of the audience (which is why we stress getting your receiving antennas above head height) and you are receiving only bounced signal. And typically, buildings contain lots of metallic materials, so reflections can quickly become overwhelming. So even if you manage to keep your transmitter and your receiving antennas properly oriented you with still end up with a huge number reflections and out of time (phase shift) signals at your antennas.

So what to do?

Traditionally we have used "spacial diversity" to help overcome these problems.  You set up and carefully space out a pair of antennas.  But over time these antennas get disturbed and moved for any number of reasons. And since these antennas must be at some distance from each other, the wave they see is likely not synced.  Here at RF Venue, we came up with a better mousetrap ... the Diversity Fin antenna.

The Diversity Fin antenna combines a medium gain LPDA (shark fin) antenna with a perpendicularly mounted dipole antenna.  A horizontally and a vertically polarized antenna at the same point in space are statistically independent— the key requirement for a diversity system to work effectively. More simply put, there is almost never a time when both vertical and horizontal planes will fade in the same location!  Hence, an antenna with both horizontal and vertical elements dramatically reduces the chances of a fade.  The result is an antenna system that switches back and forth due to changes in polarization and not merely RF signal strength.  Just plug and play, no special setup needed.

For a more on this subject check out our Diversity Fin and Polarization Diversity white paper from engineers Henry Cohen and Mike Benonis at the link below: