The plural noun form of “antenna” comes in two flavors: “antennas” and “antennae.”

If you look up antenna in an English dictionary, you’ll see that the plural, antennas, is used to refer to electrical instruments, and antennae, to the protuberances found on the heads of insects.

When I began working at RF Venue (we're a wireless manufacturer), I was instructed that the plural of antenna, the device, is “antennas.” The regular, boring English language convention of adding an “-s” suffix to make that noun represent more than one of that noun.

As I began interacting with customers, I noticed many would say “antennae” when talking about more than one wireless antenna. It seemed like a totally innocent and understandable mistake. They’ve seen the plurals of other nouns that end in “-a” commonly pluralized as “-ae” (we’ll get into why this happens later). I never corrected anyone, because I knew perfectly well what they meant and frankly the grammatical mistake—if it is one at all—is hair splitting.

Even so, everything on my dashboard confirmed that “antennas” is correct when writing or speaking about EM antennas. Every wireless expert I spoke to talked about antennas, plural. Every issue of IEEE Antennas & Propagation, the penultimate engineering journal on the art of electromagnetic transducers, had antennas printed on the cover and antennas printed consistently in every article by esteemed scientists inside.

Well, last year, while researching the Supreme Court’s pending ruling on the now extinct company Aereo, I stumbled upon a plural spelling of the word that disturbed me.

The New Yorker, infamous for their pedantic fidelity to the tiniest imaginable “correct” grammatical conventions, wrote that Aereo kept farms of antennae, not antennas.

Granted, this was an online article. I don’t think it was ever printed in the magazine itself, where articles are subjected to additional scrutiny.

So, I wrote it off as an anomaly—and possibly a mistake—by the New Yorker, which sometimes interprets grammar so faithfully they end up doing things that no one else does, like adding a diaeresis to the second vowel of any word that contains two consecutive vowels, especially of the same kind.

I slept deeply, dreamlessly, for many months.

The Economist, another esteemed publication, used antennae as the plural of antenna throughout a print article on future wireless technologies.

If you’re reading this blog, you read English—or are plugging some seriously huge strings into Google translate (which is cool).

The word antenna has a deep etymology. Thousands of years ago it existed in Greek, using the Greek alphabet; Aristotle used it to describe thingies on insect heads, too.

Some time later, it was transported from Greek into Latin, from whence English borrowed the word.

As in Greek, in Latin “antenna” (spelled just so, because English and Latin both use the same alphabet (the Latin alphabet)) also meant insect antennae, but gradually shifted to also, and then primarily, refer to horizontal poles of wood on a ship used to affix sails to a mast, often called the “yardarms,” or “yards.”

You can see the resemblance both to insect antennae and electrical antennas in this 19th century illustration of sailors “manning the yards.” 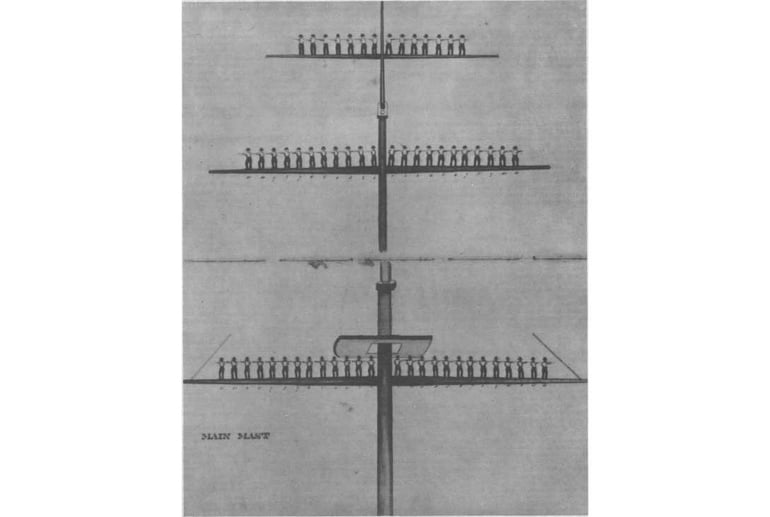 Since antenna came to modern English by way of Latin, it’s a “latinate” word—inherited from the Latin language. Although, over the years it has shifted its principle symbolism almost entirely. Antenna in Latin was the yardarm of a ship, whereas today antenna means no such thing, even though both the word antenna, in use thousands of years ago in Latin, is spelled exactly the same as the word antenna used in modern English.

The confusion surrounding the plural of antenna may come from the word’s latinate character.

In latin, “antenna” was a first declension noun with feminine gender, usually in the nominative case. In Latin, one usually pluralizes an “-a” ending (feminine) nominative case noun with the suffix
“-ae.” Thus, many antenna in Latin are antennAE.

Modern English disposes of these formalities and, for most (but far from all) nouns, pluralizes nouns simply by adding an “-s” suffix.

Since antenna came from Latin, some grammarians, like apparently those at the New Yorker and Economist, would argue that we should pluralize the word with Latin rules for plural inflection of a noun.

Others, like the practical minded engineers who invent and use antennas on a daily basis, prefer to keep it simple and just use an English -s suffix to inflect the plural.

Me? Well, I would argue that since “antenna” no longer means “yardarm” in English, as it did in Latin, and never meant an electromagnetic transducer while Latin was still a living language, we should make the latinate suffix “-ae” walk the plank into a musty ocean of useless grammatical antiques.

If you come to us, RF Venue, and ask for three “antennae,” we’re not going to judge you. We know perfectly well what you mean, and could care less.

Though by a vote, it seems that “antennas” is the correct plural inflection of the word meaning an electrical antenna, especially when you’re talking to engineers. So if you work with antennas frequently, or interact with electrical, broadcast, or live audio engineers on a regular basis, you should probably get with the program and use antennas to avoid ridicule and enduring social stigma.

The New Yorker and the Economist can pluralize antenna however they please.

I guess my roundabout point here is, in the end, it doesn’t matter—as long as I know what you mean.