This setup effectively creates an eight channel combiner for much, much less than a standalone active 8 channel transmitter combiner.

Route both outputs of two four channel IEM transmitter combiners through a single passive 2X1SPLIT, and finally into a helical antenna.

Were we building this kit out for a customer, it would look like this:

There are some engineers who prefer to use two or more four channel combiners with dedicated antennas, as a measure of redundancy. That’s fine, but remember to space active antennas a good distance apart to avoid near-field interactions that may result from antenna farming.

Remember any time you add additional transmitters you will be adding additional IM.  In the case illustrated above the CP Beam antenna is adding 10dB to the signal strength so switching to this should allow you to turn down your transmit power to half power or preferably less.

Here’s a request we get all the time: “we want the same wireless microphone to function across two or more rooms.”

We use two Diversity Fins and two 2X1SPLITs to accommodate those requests.

In effect we create a simplified DAS, or distributed antenna system. In a DAS, talent freely wanders through a series of coverage “zones” without fear of losing reception. Signal sent to the same receiver(s) or different receivers depending on the engineer’s design. 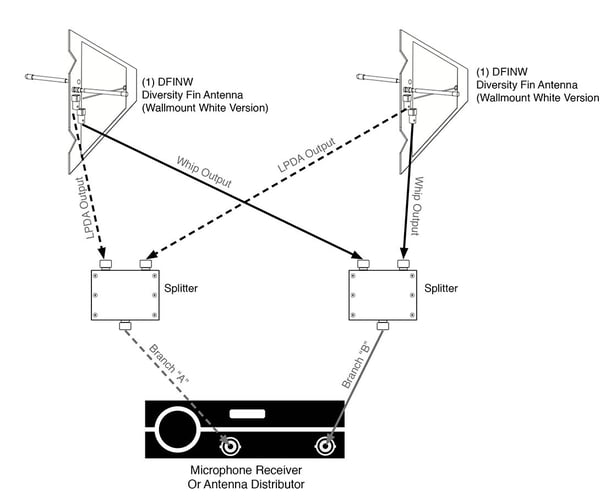 Alternately an effective ceiling mount using CX22 antennas would look like this: 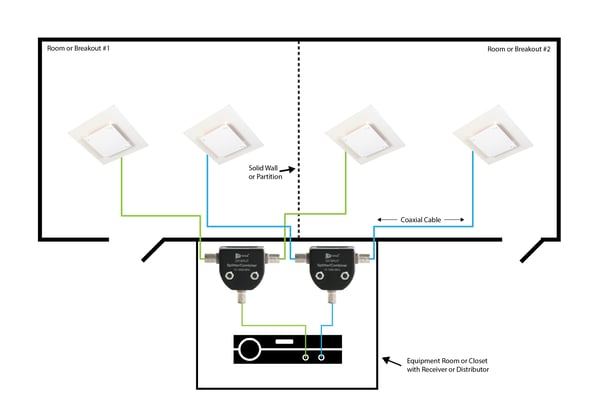 When more zones are needed the setup gets more complex.  But our 4Zone combiner is an easy to use and economical solution. Here are some tips for using the 4zone system

If you have a spectrum analyzer, you can “tap” your antenna feed or, even better, one of the outputs on an antenna distributor, using the 2X1SPLIT.

Simply place the splitter in-between one branch of one output of a distributor. Feed one of the splitter’s outputs to the analyzer, and return the other output to the receiver.

The goal is visualize RF from the perspective of the receivers. The nearer the tap is to the final destination of the signal, the better the data the analyzer can retrieve for you, since it is seeing what the system is seeing.

This setup is great for taking a peek at RF activity from the system’s perspective, and for troubleshooting RF where an ambient scan has not revealed anything, but it is generally not recommended for routine operation.

The splitter adds one additional point of failure to the signal chain, and poaches a few dB of amplitude, changing the receiver’s interpretation of the two diversity signals.

If you want to do a wiretap during actual performances it’s much better to tap from an unused output on a distro, or on the cascade output of the final distro in a daisy-chain.