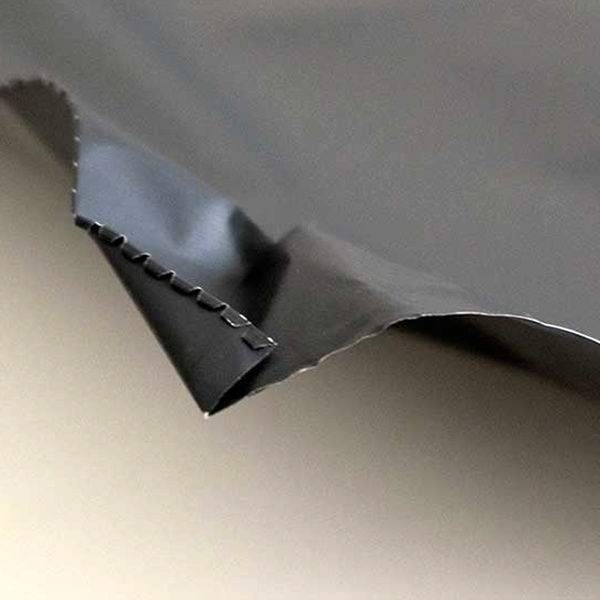 Before you can fight interference, you must find it.

Finding a source or spurious radiation is not easy, no less on a stage crammed full of video walls, cables, and other stage machinery, because radio waves are invisible and inaudible.

A wireless receiver, on the face of it, provides only one clue—signal strength. And spectrum analyzers, even the pricey ones, can’t locate the source of interference all on their own.

But with a little help from you, and a directional antenna, both wireless receivers and spectrum analyzers can be transformed into powerful interference hunting tools. 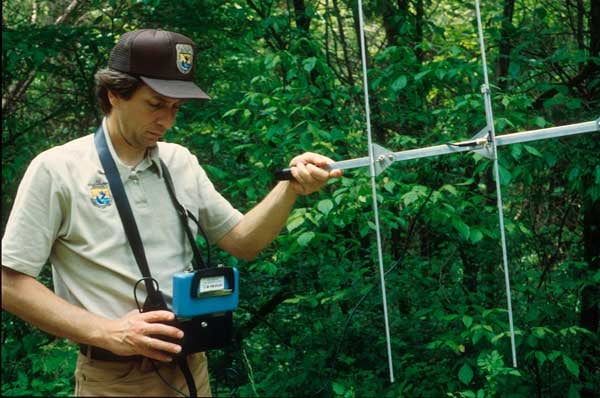 The same RF tracking techniques used by wildlife biologists can be used by audio professionals
to locate RF interference.

We’ve written about the process at length before, without mentioning spectrum analyzers (which make the process a hell of a lot easier, btw) as well as the technique of “frequency dependent attenuation” DFI using a DIY tool: the handheld transistor radio.

The gist is that since directional antennas amplify radio signal in front of them, and attenuate radio signal arriving from the sides, they can be used as a kind of spotting scope for RF.

By connecting a directional antenna to the input of a spectrum analyzer or receiver and sweeping the antenna back and forth, you’ll either see (if looking at a spectrum analyzer or signal strength indicator on a receiver) or hear the interference (if listening on headphones or PA) when the antenna is pointed in the direction of the source, since the receiver/analyzer is “seeing” through the directional antenna.

Once you’ve got a direction where the interference sounds or looks strongest, walk forward a few steps, and repeat. The interference will continue to get stronger and stronger the closer you get, until you’re standing on top off, underneath, or in front of it.

Then the fun begins.

Sometimes, very rarely, you might know exactly what part of the device is the source of the leak, and rewire or solder it to a resolution.

Other times, also very rarely, you might be able to get permission to turn the device/component off or have it replaced, but only with political leverage and the good graces of a video director willing to forgo that component. (translation: impossible)

But for the most part you will have to use tools and techniques at your own disposal to resolve the interference without changing anything on the wall.

2. Use Blackwrap to Contain the Interference.

You are probably very familiar with blackwrap. But I, a lowly blogger, am not. I ordered some just to get my hands on it, and to do a crude demonstration of how one might go about wrapping a radiating component here at the office. 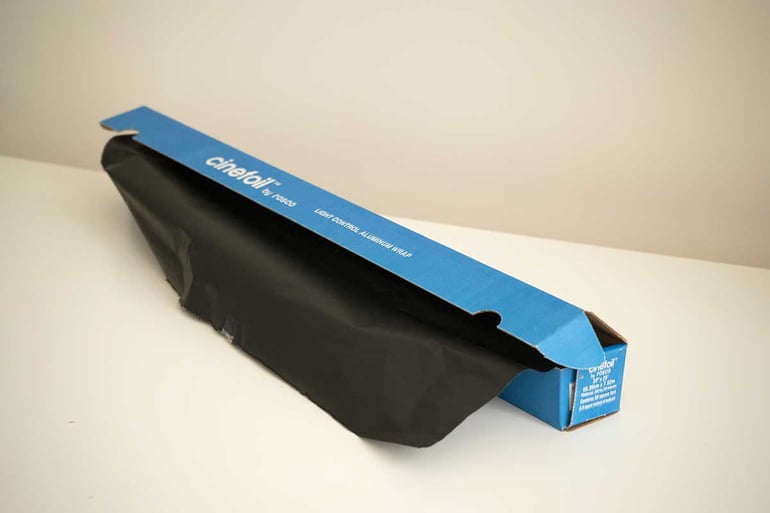 If you locate an offending device, cover as much the device as possible in blackwrap, or gaff tape a piece of blackwrap over the top.

Take this junction box for example: 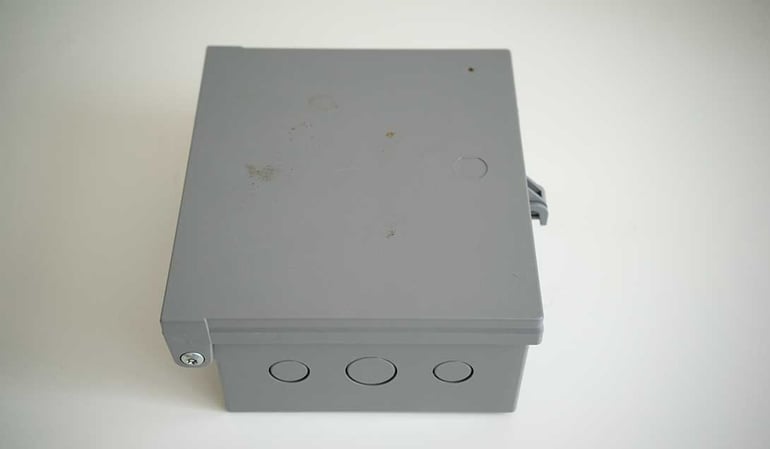 It's filled with electronics spitting out RFI. 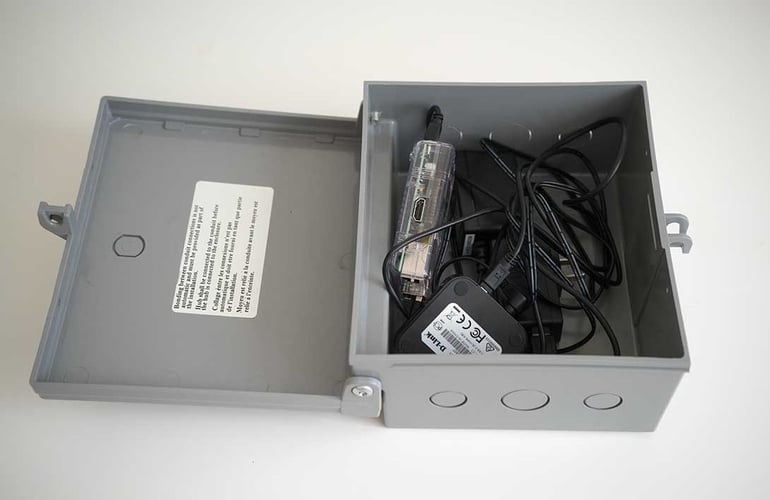 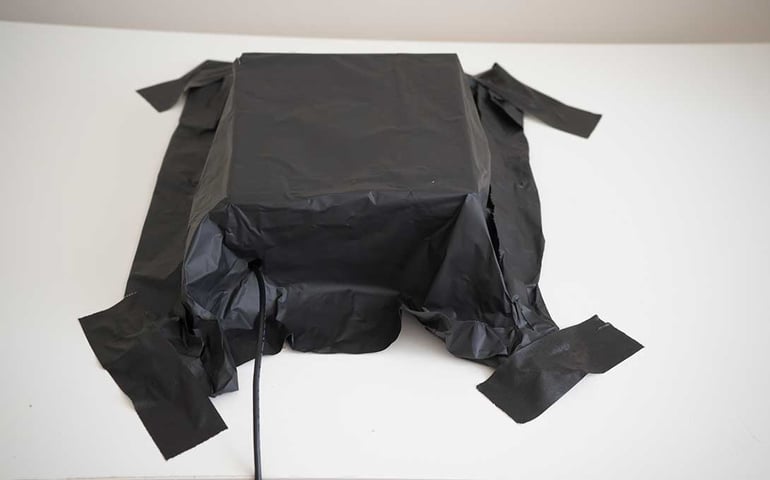 Voila! A newly shielded junction box—using nothing more than blackwrap and gaff.

The blackwrap acts as supplementary RF shielding and absorbs and reflects stray radio waves back at the device or inside the chamber of the blackwrap cocoon, instead of spewing out into the air and all over your receive antennas.

It’s best if you can cover the device in a way that the wrap makes minimal contact with metal components and connectors on or connected to the offending device’s enclosure. Contact with these parts could, under some circumstances, lead the blackwrap to function as an antenna and simply re-radiate that energy back out into the environment as if there were no blackwrap at all.

3. Use RF Attenuators to Push Down the Noise-Floor. 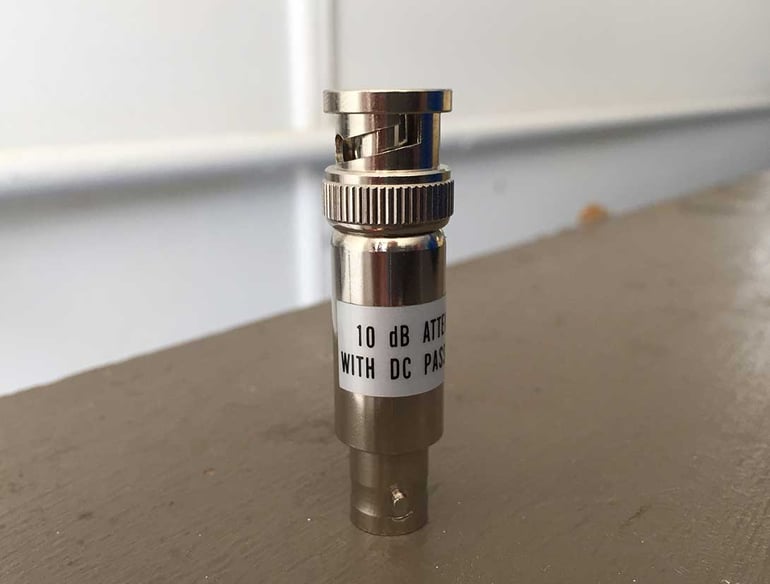 When broadband RFI from video walls raises the noise floor, but you still have good to great RF levels at the receivers, you can use fixed attenuators on your receive inputs to push the noise floor down closer to its native level or below the sensitivity of the receiver. 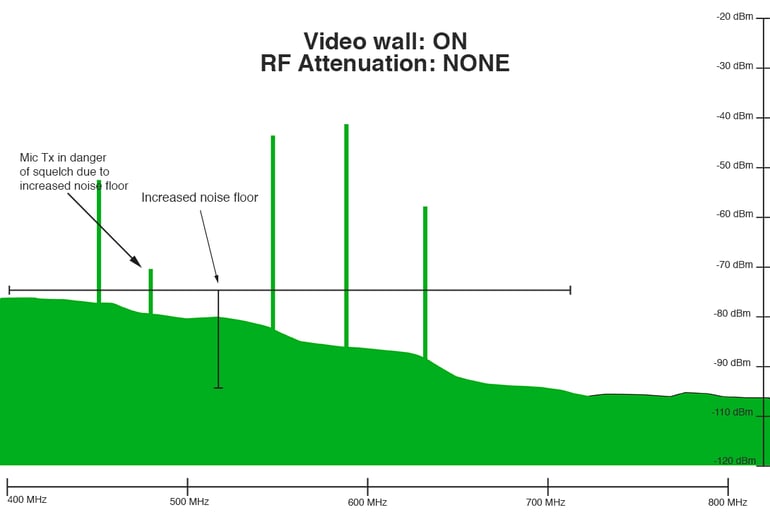 The signals get pushed down as well, of course, but because of the way receivers calculate acceptable signal strength and under what conditions to squelch, you’ll get improved signal out of your receivers. 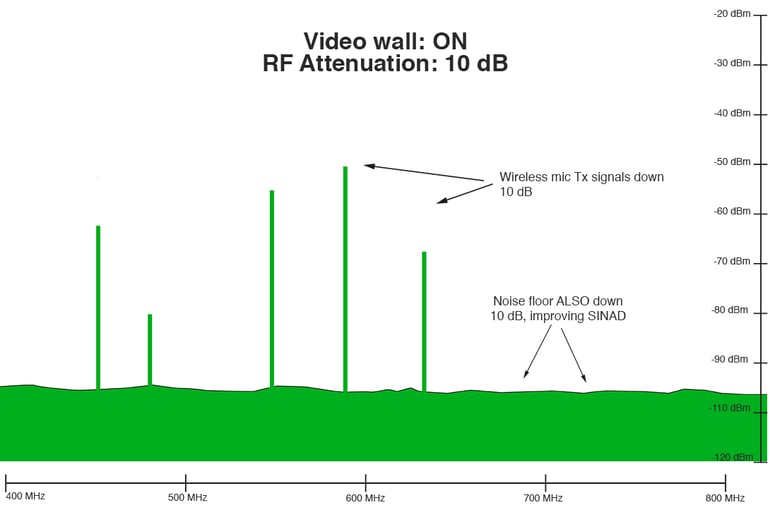 “If the levels on your receivers are all pegged, which they should be, then you can put on attenuators, 3, 6, to even 10 db attenuators at your antenna input, and that pushes down the noise floor enough that, by adding 10 db of attenuation you increase range and increase audio quality.”

4. Use Directional Antenna Coverage Patterns to Your Advantage.

The directional coverage pattern of a helical antenna.

When it comes to using directional antennas specifically for avoiding video wall interference, circularly polarized helicals like the CP Beam and PWS Helical seem to be the weapons of choice.

Here, showing is much better than telling. 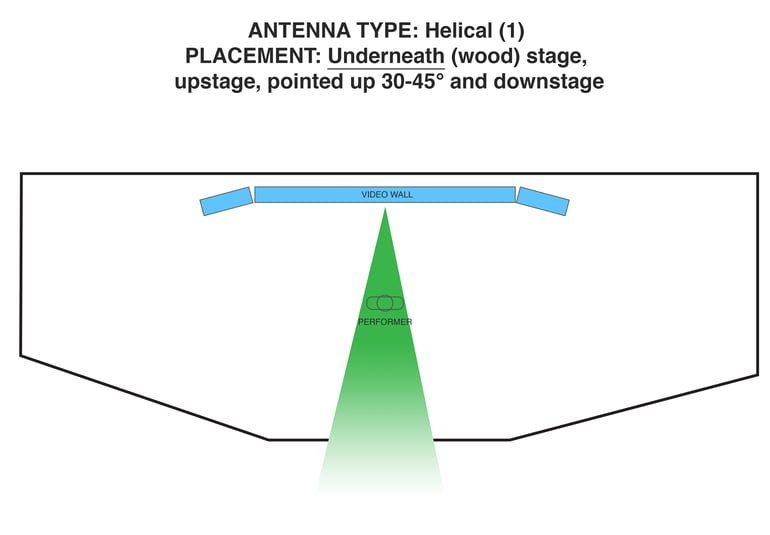 The green triangles represent the beam width of the helical antennas (not to scale). The pointy end is where the antenna is located, and the wide face that gradually tapers to white is the direction the antenna is pointed in. 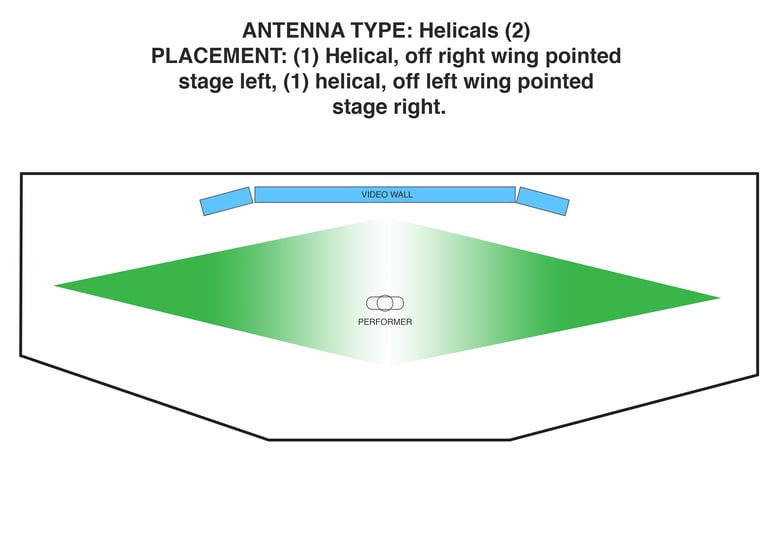