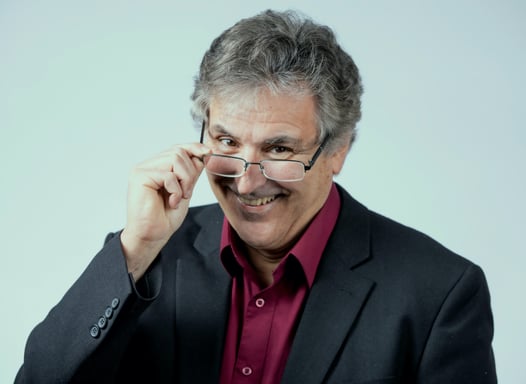 Well, Bob is still very active in wireless and pro audio. Although we don't hear much from him on Audio Gloss, he leads many of RF Venue's R&D efforts behind-the-scenes.

I sat down with Bob to let him explain our unique approach to electromagnetic innovation and, in particular, the concept of the physical layer.

AM: What is the physical layer?

RC: The physical layer today is generally used in reference to networks, and most commonly in reference to whatever way bits get sent around, physically. Through the ethernet wires, through the actual physical transformation of electrical signal into radio wave signal or from one place to another.

The physical layer for us means the actual analog modulator, transmitter, radiating antenna, how that antenna radiates through space, the receiver antenna, coax cable, distributors, so on and so forth. In other words not software, not even firmware, but the actual physical stuff that does the heavy lifting.

It makes sense to solve some problems with software. You can introduce things like frequency selection or agility, spread spectrum (which still use the physical layer by the way), but there is a lot of emphasis on these types of software solutions to problems in the physical layer.

AM: Why do you think manufacturers overall have skewed their solutions to higher layers in the network architecture instead of doing what seems to me, perhaps because I have spent so much time with you, to be more obvious and straightforward, which is address it on a more fundamental plane?

RC: The answer is, because the Radio Art, capital letters, is old. All the physical laws and realities are known, maybe not all appreciated, but they are known. Whereas the other areas, software and firmware, computing, so forth, that’s new, and so this is where the attention is drawn towards.

There’s a very well known process that we have carried through all of our businesses, which is we go back to the basics. We go all the way back to the beginning of time in the field, for instance, all the way back to Marconi, or all the way back to Heinrich Hertz and say, ‘if Hertz was here, what would he do about this problem?’ Hertz, for instance, very clearly demonstrated cross-polarization fades. He showed it the very first time radio waves were ever demonstrated. So, you would assume that anything and everything that could be done about it has been done about it.

Well, that’s clearly not so.

RC: That’s the hard part. You have to go back to the basics, reanalyze the problem, and say ‘what have people missed?’

AM: Explain how some of your other businesses have used this methodology.

RC: We learned from Crowley and Tripp microphones that having more signal and lower noise was always beneficial. There was never a case where it wasn’t worth it. Isn’t that obvious? Shouldn’t everyone think to do that? The answer is no. When you look at all the equipment that’s out there and the designer has said, oh well, all I need is somewhere between 10–20 dB and I’ll be fine, and they’ve designed the system around that. Well, that’s great for the average condition, but we’re interested in the exceptional conditions; Extreme congestion, the areas where there are likely to be dropouts, which will be infrequent but severe, those types of things, in order to improve that 99% reliability, which isn’t good enough, into a 99.999% reliability, which is what people need.

RF Venue is all about that.

Our antennas; Why are they so popular? Because they work very well. They gather a lot of signal, or the right signal, or some combination of those two things.

Of course it doesn’t help if you can’t see signal, or can’t measure it somehow. That’s why we’ve introduced products that examine the spectrum. The industry in general is interested in that, but not everyone knows how to use an Agilent spectrum analyzer. Those are complicated. You see a bunch of lines on them and you don’t know what they mean. So, the information has to be put into context to make something people can use.

AM: We’ve been talking about signal, I think maybe we can talk about spectrum. At this point, most people seem to know that the spectrum we currently use is going away, and that the government and cellular industries are exerting pressure to make that happen.

RC: The government has long granted exclusive use rights for certain portions of the spectrum for the public good. What changed was the advent of cellular technology in the 1970s, and the need at the time to get private industry to invest in wide area networks that could use these things. And so the FCC and Congress agreed at that time that the way to incentivize it was to grant licenses, for a long time, potentially forever, to companies that build out the infrastructure.

Pretty soon the 832 channels that the FCC allocated got filled in metropolitan areas, and so there was the need for more spectrum. Sensing money, and the potential for adding cash to the government coffers, the US congress directed the FCC to make more spectrum available for wireless operators and sell it at auction at a price, which at that time they felt was very high, millions of dollars.

AM: Tens of millions of dollars!

RC: This was in the 80s, less than ten years later. Now, we’ve got this intense demand for broadband devices. Of course, you can’t drive your car unless you’re texting. It’s impossible to drive unless you’re looking down at your phone. If you think of the number of people who are willing to pay anywhere between $50–100 a month to do this, and multiply that times 300 million people, the economic pressure is intense.

There’s this assumption that if people want to use the spectrum and it’s good for business, we’ll just keep giving them more spectrum. Except, a few people realize that this is now starting to contradict Congress’ and the FCC’s original intention to allocate the airwaves in the public interest.

The UHF band became one of the first areas where real, good, regulated mixed use of the spectrum was occurring, which had wide economic value. There were a lot of things that were allowed in the UHF bands, besides TV stations. Studio transmitter links were one of the first, and then there were all kinds of other wireless devices, and wireless handheld communication devices that were permitted in various locales, including microphones.

UHF TV band happens to be a pretty good place to be if you are using cellular telephones, because the antenna efficiency for a cellular handheld at that frequency, which is about fifty or sixty centimeters, is pretty moderate. It would actually be better if they were up towards 1 GHz. But, the AT&Ts of the world want to take the easy route, and they want to go down in frequency, and so that’s why they are highly covetous and willing to pay billions of dollars for 600 MHz spectrum. They caused all the TV stations to move down, and now they’re talking about making the TV stations move again, back down to VHF. It’s crazy.

AM: Well, the counterargument I hear all the time is that people want data, they want cellphones, more than they want the now, from our perspective, deprecated services, like over-the-air television.

RC: Naturally the part that raises the biggest question in terms of public policy in the United States, Canada, and now Europe is the recognition that there are a lot of people who aren’t served by the internet. That was one of the Obama initiatives. There’s a directive that Wheeler talks about from time to time to get cellular operators to provide broadband services out to these underserved, thin areas where it’s not profitable.

RC: Wrong. Innovation arises when spectrum is allocated for the public good. Look at WiFi and the crappy little bit of spectrum they’ve been given. It’s criminal if you ask me, and could be greatly expanded.

If we’re going to be given little slices of spectrum, then we have to make good use of it. There’s going to be traffic, sort of like driving a motorcycle on a highway. You want to be able to see all around you, and be able to control the direction of your signal, so that you can get from point A to point B successfully so you can do your show, or have your broadcast, or have your service without a lot of pff and bzzz, and that’s what RF Venue is doing.

AM: Give me one concrete example of how we’re doing that, now.

RC: The great example of that is the RF Spotlight which in highly congested area knocks down, for example, the huge amount of signals you find at a convention, and focuses only on the local signals that you want to pick up. You aren’t interested in what’s in the hall on the other side of the facility. You’re interested in the speaker who may have a wireless body pack and headset microphone. Instead of following the dictum of putting antennas up high which is antiquated, it puts the antenna on the floor so it only picks up high angle signals and ignores unwanted signals on the horizon.