This post is the third in a series on understanding, finding, and mitigating interference for operators of wireless audio equipment.

So far, we’ve only talked about ways of understanding and categorizing interference. Now, it’s time to get busy.

We will limit our discussion here to finding methods for interference stemming from unintentional radiators, which include any man made devices that accidentally or unnecessarily emit electromagnetic energy that creates harmful interference to nearby radio equipment. We talked about these last time, but as a quick review, nearly anything device that uses electricity is a potential unintentional radiator: power lines, spark plugs, thermostats, TV screens, blenders, all are common candidates, and there are many, many more.

Finding interference that comes from intentional radiators is more difficult—and in some cases, pointless—so that will have to wait for a different post.

There are two practical finding methods that you have at your disposal. One requires a microphone receiver or other radio, and a directional antenna. The other requires only a radio. 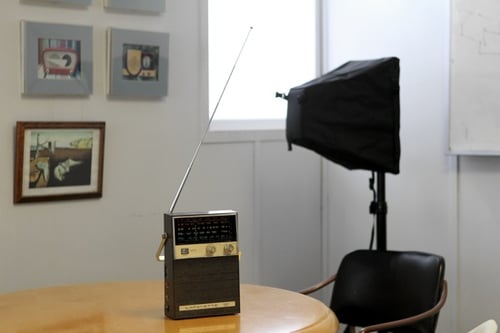 The directional finding technique is probably the easiest, but it doesn’t disclose the source’s proximity. Another method called frequency dependent attenuation exploits the fact that unintentional radiators are characteristically broadband, and that lower frequencies carry farther than higher. When something releases unintentional RFI, it usually does so across a broad swatch of frequencies, which could be one, ten, or hundreds of MHz wide, whereas an intentional signal or collection of signals is usually very narrow by comparison.

The broadband nature of spurious unintentional interference is what makes it so disabling, but it also gives sleuths a leg up on interference. The physical distance traveled by an electromagnetic wave is inversely proportional to its frequency. For example, a wave of 500 MHz may be able to reach a receiver 100 feet away, while a wave at 250 MHz of the same amplitude might travel 400 feet, and so forth. There are many factors that change how far a wave can travel, including transmission power, gain of transmitting antenna, air density and temperature—but you get the picture. 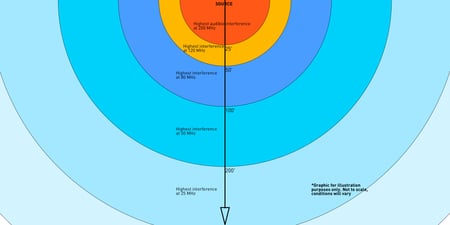 Imagine there’s an old mercury thermostat in the bowels of a theater somewhere. At the source, this thermostat pushes out strong, broadband RFI from the top of the UHF band (698 MHz) all the way down to below the bottom of VHF (54 MHz), and even below that still. A wireless microphone receiver up in the booth is getting strong interference around 500 MHz.

In the theater example, the user could tab up through the preset frequencies throughout the receiver’s range, starting at 550 MHz, while moving around. As the interference gets higher and higher, the thermostat draws closer. Maybe it’s in the basement, or up on the cat.

A dedicated microphone receiver can be used with this method, and is most likely ideal since it is tuned to the same frequency range that microphones use. However, receivers aren’t always built to be mobile. And even if they are, rack mounts make this method impractical.

An inexpensive and convenient interference hunting substitute receiver is a handheld analog transistor radio. They’re small, light, and portable, and the analog dial facilitates frequent retuning. At the very least, they give you two frequency bands to play with: medium wave AM (531-1611 kHz), and broadcast FM (87.5-108 MHz). There are plenty of cheap, vintage VHF analog radios to be found on eBay—although UHF models are rare. 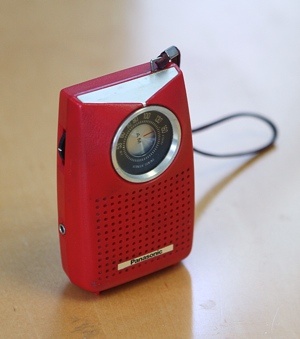