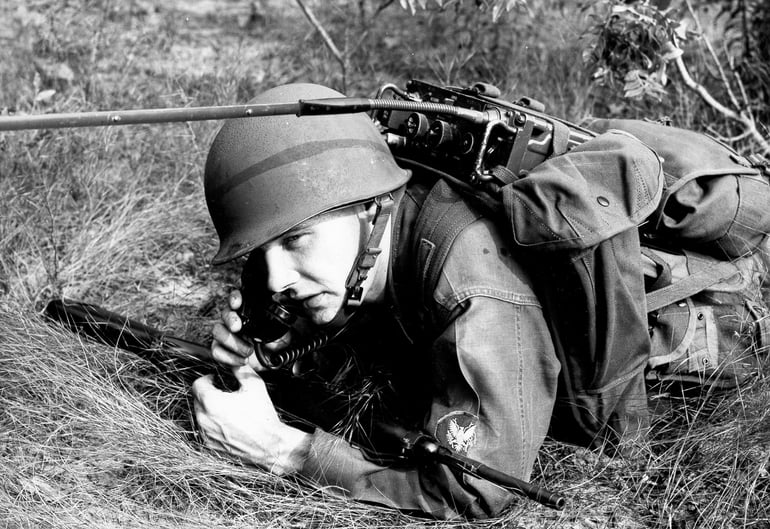 “FM” stands for “frequency modulation.” In an analog FM system, an RF carrier wave varies its frequency in proportion to changes in an audio wave's amplitude and frequency. For more on the difference between analog FM and digital see here.

There's a lot to love about analog FM. It sounds great, has slightly lower latencies (technically, analog has no latency, only delay as the electrical signal passes through components), and is a bit more forgiving of low signal-to-noise ratios than AM and digital alternatives.

However, those advantages come at a cost: FM is a heavy user of spectrum.

With UHF spectrum disappearing just about everywhere, high density wireless microphone users have no choice but to find methods of fitting more channels into less space if they want to continue using as much wireless as they do now.

Assuming no breakthrough technology pops up in the next few years, the simplest and most cost effective strategy for increasing spectrum efficiency in the near-term is to transition most—but not all—wireless microphone users to systems that use digital modulation, while leaving analog FM for applications that need it most.

Today's top-tier digital technology provides performance specifications more than adequate for the majority of applications (and tomorrow's will only improve) while allowing a larger number of channels to live together in the same bandwidth.

The trouble with FM.

On its own, an individual analog wideband FM carrier and sidebands at full modulation can consume up to 200 kHz of bandwidth—a lot more than many other forms of FM and AM modulation.

In FM, the radio "intelligence" or speech information is conveyed within the single carrier wave visible as the center spike on the scan below. Modulation also produces useless sidebands flanking the carrier.

In both analog and digital transmitters and receivers, two or more signals interact to create intermodulation distortion (IMD). IMD are spurious signals created as the carrier frequencies of signals are mixed together within non-linear devices. The larger the number of signals in use in a given area, the larger the number of intermods. The quality and quantity of filtering, types of devices in use, and other factors all influence how severe IMD is in practice. It is not possible to completely eliminate IMD, though it is possible to accurately predict where intermods will not be using software programs to ensure desired frequencies do not fall on an intermod product.

Because of its prominent sidebands, analog FM requires more space between carriers for multiple signals to peacefully coexist, and more careful calculations to ensure intermods are avoided. Digital produces sidebands and IMD as well, but they are less prominent, which allows channels to be densly packed together.

Receiver design determines spectral efficiency as much as transmitter design. Modern receivers are pretty good, but they aren't perfect. They allow waves of slightly higher and lower frequencies into the front-end, sometimes resulting in interference. They also pitch RF frequencies back down to AF by mixing lower frequencies with the received signal to produce intermediate frequencies. This process creates additional by-products that limit channel density.

What we in the industry call “frequency coordination,” with its familar arsenal of techniques and software tools, mostly exists because analog FM technology causes problems. The black art of wireless audio frequency coordination as we know it today is not as necessary when digital radios are used.

Does the industry need a digital transition?

Does the wireless audio industry use analog wideband FM because it is the best of all available technologies for the application? Or does the industry use it because it offers the most reasonable balance between performance and price, or, uncomfortably, because the industry has never had reason to change?

The answer is not black or white, and the “technology” in FM systems is not one individual piece.

It also depends on whom you ask. The average school AV tech might not care one way or another what type of modulation a microphone uses, as long as it works. Ask the world’s leading frequency coordinators working gigs like the Super Bowl or Olympics, and they will often specify analog microphones over digital, for valid reasons.

“I have a lot of reservations about digital radio mics at the moment still,” says Steve Caldwell, one of the industry’s leading RF Consultants, sometimes affiliated with Norwest Productions in Australia. “I will not specify a digital radio mic for use in a large venue. They just don’t cope with the noise floor at all.”

Steve explains that in analog FM the bulk of the transmitter energy is concentrated in a single, narrow carrier wave. With digital modulation, the energy is distributed more evenly across a number of carriers, each of which toggle between different discrete amplitude states.

A digital signal is multiple carriers stacked against one another.
Note the lack of prominent sidebands.

A lot of digital carriers are needed for high quality audio. As Sennheiser rightly pointed out in their petition to the FCC, transmitting high quality digital audio requires a lot of bandwidth, about the same as FM: 200 kHz. Manufacturers may possibly continue to improve the efficiency of digital wireless and get higher and higher quality audio into the same amount of bandwidth (or license technology from other industries that accomplishes the same thing), but progress is slow.

Digital receivers are effectively immune from noise, but are a bit more likely than FM mics to suffer from dropouts caused by weak signal strength.

However where spectral efficiency is important, analog FM’s drawbacks outweigh its benefits for the majority of applications, and the performance of modern digital wireless systems are more than adequate for almost everyone.

For the individual user, analog wideband FM surrounded by modern circuitry is a marginally superior technology to any other at the same price point. Top tier FM microphones provide no latency, very high audio quality, and resistance to interference superior to AM and digital alternatives.

But for all users analog wideband FM is relatively wasteful when compared to other modulation techniques. It consumes a disproportionately large amount of bandwidth and creates interference that crowds spectrum to the detriment of other devices.

“Without a doubt,” says Steve, “we should be keeping the analog gear for applications that need it, or applications for which a digital system will not work... With digital, you can effectively stack digital carriers up side by side, in similar fashion to what they are doing with the digital TV channels, and get a lot more out of the spectrum.”

Make no mistake, Steve and the rest of the world’s best coordinators are doing their part to shift the device population off of analog and onto more efficient technologies, too:

“Currently I am in the middle of resolving the spectrum usage for the European Olympics being held in Baku, Azerbaijan. We are using a good compliment of the Shure ULXD Digital mics, along with Axient, Sennheiser EM3732, and Sennheiser IEMs. Most of that is analog, only the ULXD are digital, but being able to place almost all of the ULXD into a single TV channel is absolutely gold.”