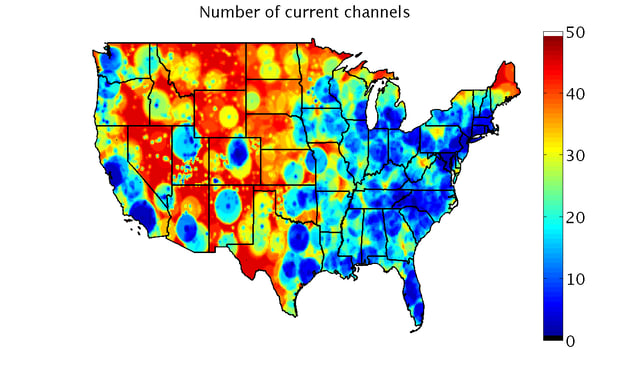 Kate Harrison, a PHD student at University of California, Berkley, has coauthored a study with Anant Sahai on improving reception for wireless microphones in the broadcast band after the widespread rollout of TVBDs. The study proposes registering all microphones, instead of only Part 74 license holders, on the TVBD database.

[She has also done some other work on spectrum efficiency that deserves a look, not the least of which is the amazing infographic that accompanies this post, which visualizes something all of us already know: big cities have no channels, rural areas have all the channels! Check out the supersized version here.]

The study, titled Register Everyone: on the whitespace use of wireless microphone channels, channel 37, and the soon-to-be guard bands, takes a close look at the unique regulations that govern wireless microphones, and proposes a simple method for managing frequencies: registration on a database for all wireless microphones, both licensed and unlicensed, using a smartphone application. From this suggestion, the paper makes a bold claim: “We expect that, through the use of modern technology, we can easily protect wireless microphones and channel 37 services while using the remainder of these channels for TVBDs.”

[For a refresher on the definition of a TVBD, please look here]

The FCC sets aside two reserve channels for wireless microphones above and below channel 37. The location of those channels depends on the closest available channels above and below 37 that are not already in use by a television station in a particular area. So they are not the same in every location. Harrison’s study proposes that instead of perpetually reserving these two channels for wireless microphones, by default TVBDs are allowed to operate on reserves, and only vacate once a microphone user registers via a database. As long as every single wireless microphone using reserve channels registers through the database, the spectrum can be shared efficiently between TVBDs and wireless mics. A smartphone application is used to facilitate quick and easy microphone registration by users of all skill levels.

“As a concrete example,” explains Harrison, using Berkeley, CA as a dummy location. "Suppose that in Berkeley channels 31 and 32 are completely reserved for wireless mics under the existing regulations, i.e. no whitespace device would ever be allowed to operate on these channels in Berkeley, regardless of mic presence. We propose that whitespace devices should be allowed to use these channels... unless a wireless mic is currently registered on them. As soon as a wireless mic registers on (e.g.) channel 31, the WSDs would need to stop using channel 31 in that area for the duration of the registration.

"The goal is to avoid easily-achievable ‘infinite registration... while still giving wireless mic operators enough flexibility to operate without a lot of headache and hassle.”

Registration is something that licensed wireless microphone users (who hold a valid Part 74 license from the FCC) already practice for long term installations, like TV studios, and special events. Registration involves entering the place and time when microphones are expected to be used. The FCC, in conjunction with an approved administrator like Spectrum Bridge, denies or approves this request. If approved, the database relays information to TVBDs and other users of unlicensed devices to steer clear of the frequency the microphone will be using at that time.

A little known fact is that unlicensed wireless mics can also reserve channels in the database for special events. They can only do so if they prove there will be no other channels available, and submit requests well in advance, along with other requirements. Very few unlicensed users are actually eligible for registration. Since registration requires technical skill, reserves valuable spectrum, and is executed by a human operator on the database side, the process is deliberately shrouded in technobabble to impede unskilled operators from registering, and the legal framework surrounding it is deliberately vague to keep the door open to future changes. Understandably, the FCC does not want every church pageant up and down the country hogging spectrum worth hundreds of millions of dollars, and they do not have the human resources to manually approve more than a handful of requests every day.

By deploying a simple registration app on mobile smartphones, Harrison hopes to solve these well founded concerns. Building clever UX and regulatory restrictions into the app prevents unskilled or unlicensed operators from registering in the wrong place or for too long, and integration with automated TVBD networks already set up by database administrators spares the FCC from delegating additional labor to police a throbbing mass of unlicensed users.

Harrison is the first to admit that there are still a few practical unkowns and questions that remain unanswered. Like, how long will each registration last? And what percentage of the entire population of wireless microphone users needs to adopt the new registration rules for them to be effective? How many users can we realistically expect to obey registration requirements? And what will be the consequences--for themselves and other users--if they don’t?

The fundamental problem here is that in a few years microphones will be driving antique technology down a highway of futuristic sports cars that constantly, and without warning, swerve across multiple lanes. Without prior knowledge of where a microphone is transmitting, white space devices have no knowledge of their existence. Microphones themselves have no means to alert other devices of their presence, and since many mics are still analog, they have no way of getting out of the way when a TVBD pops up in their frequency.

Wireless users and manufacturers are opposed to rolling out costly new digital equipment with frequency hopping capabilities and/or some type of uplink that turns the microphone into a simple TVBD itself. Meanwhile, there is much wailing and gnashing of teeth from TVBD operators as they think about those 12 MHz of reserved spectrum sitting idle.

By applying her knowledge of computer networking and cognitive radio to these problems, Harrison has devised an interesting solution that reconciles the opposing interests of microphones and TVBDs, while nudging the wireless audio industry, however gently, into the future.