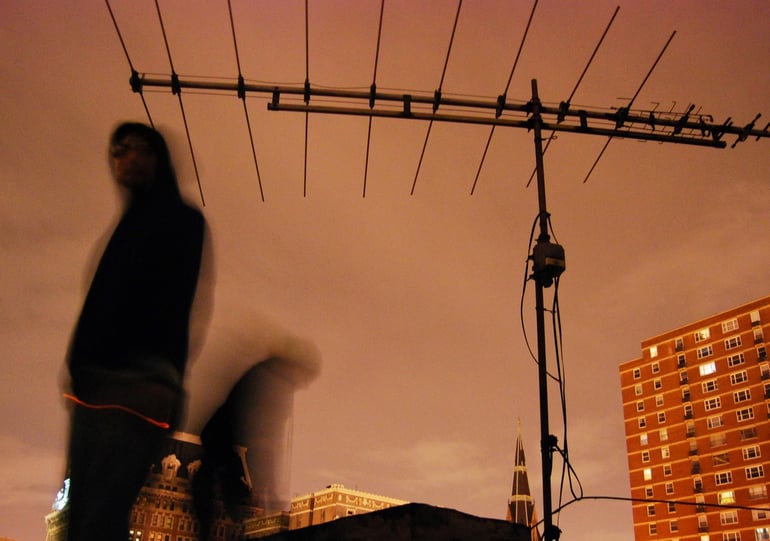 One of the tradeoffs with high gain antennas is that the higher the gain, the narrower the beam of coverage. This is usually a good thing—but not always.

For example, the CP Beam has a gain of 9 dBd, creating a beam-width of 43°. This narrow beam width is exactly what you want if the antenna is positioned a reasonable distance away from the microphones or belt packs on stage (say, at FOH, or in the wings in monitor world). It provides increased range and reception by focusing more of the RF energy into that area. It also attenuates signals that fall outside of the beam, allowing you to strategically place helical and other high gain antennas and point them away from interference sources, like LED walls, and towards the signal of interest.

However, if a high gain antenna is placed in close proximity to talent using or wearing a wireless microphone or beltpack, the talent could move outside of the coverage area of the antenna, causing a dropout.

The CP Beam, actually, is not that directional, if you include the entire field of antenna design, and the polar plot above shows that it will still receive energy 360° around the element, but in differing amounts. In front of the element the CP Beam will increase the apparent signal strength of a signal, to the sides, it will moderately attenuate the signal.

There are antenna designs that have much sharper—nearly complete—rejection of off-axis signals, but we very rarely see these types of antennas in pro audio. The following polar plots show the extreme rejection of various types of "end-fire array" antennas.

End-fire array antenna patterns, the image of which mysteriously appears on WikiMedia with no author to attribute. The left most point of each of these patterns (where you see the small bouquet of smaller lobes, would be located at the center of the polar plots above. Now THAT's rejection.*

The point is that antenna coverage patterns and (if specified) beam widths should be considered when setting up a system to ensure the antenna allows sufficient coverage for the movement of talent in a given space, especially if there is poor signal-to-noise ratio—which would, were the talent to wander off of the main axis of an antenna like the CP Beam, increase the chances of dropout.

An Omnidirectional Antenna with High Antenna Gain is Impossible to Construct

That higher gain antennas have narrower beam-widths is a function of physical laws. Engineers have been able to figure out some impressive and acrobatic designs for antennas that shape radio waves in incredible ways, but so far they have been unable to dupe the simple reality that if an antenna focuses RF more strongly in one direction, it will be less strong in another.

There are a number of omni-directional antennas on the market that claim to improve reception while providing an omni-directional coverage pattern. That is, they promise a single antenna will increase signal strength, and therefore increase range equally in all directions. These antennas are usually dipole antennas mounted in a housing that allows remote placement, but are otherwise no different than stock dipoles that ship with receivers.

You can have an exceptionally well constructed and electrically efficient antenna with an omnidirectional pattern that may very well increase range, but it is not increasing range through directional gain, but rather in its ability to collect a greater percentage of available RF energy from the environment. For example, a half-wave dipole will probably collect more energy than a quarter wave whip (monopole) antenna that might be used as a lower cost stock antenna on some receivers.

You can also have a high gain antenna that radiates more strongly across one horizontal or vertical plane in degrees of one axis (elevation angles), but not others. 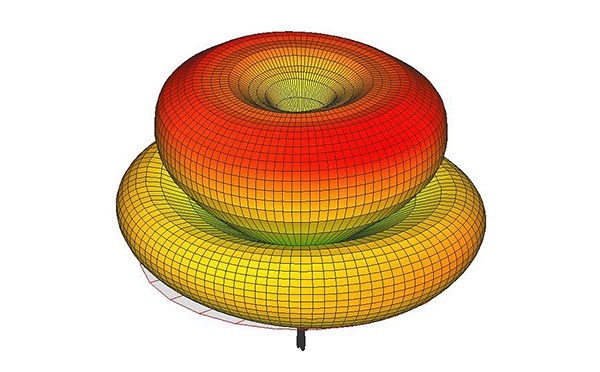 These are sometimes called “high gain omni-directional antennas,” and here the use of that term is more appropriate, but not truly omni-directional; the coverage area is like a horizontal pancake, or wheel, rather than an omni-directional sphere. (which, by the way, does not exist. Even the most evenly radiating dipole antenna still has two nulls located at the top and bottom of the element.)

Still, a lot of people want the best of both worlds. They want an antenna that will increase range while allowing their talent to roam wherever they please. That is in part why the Diversity Fin antenna, although not a single antenna, was designed and is now popular. It is effectively able to provide both directional and omni-directional coverage by combining two antenna elements on the same board, and the diversity receiver votes between which antenna has the best signal.