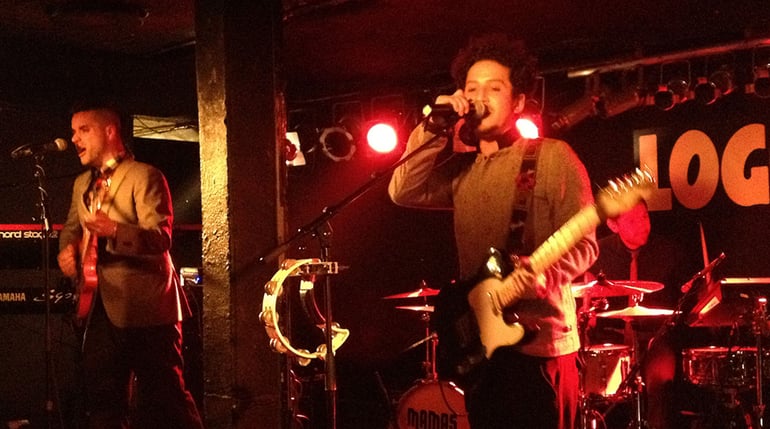 Small venues offer an abundance of errant charms. Funky seating, graffitied bathrooms, folk art: they are the authentic backdrops to stages where real music is played.

Unfortunately, they also may offer a minefield of interference to the wireless audio user.

Whether you’re a traveling band that brings their own wireless kit, or an in-house engineer doing their best to maintain an honest, trouble-free venue, you should keep a close eye—and ear—out for these common and frustrating RF phenomena.

The personal monitor mixers so popular with bands these days are notorious for dirty electrical components that kick out bad RF. Other common road gear like effects pedals and guitar/bass amplifiers can, either through malfunction or poor design, also be a source of radio interference. Since these devices are on the stage, they are in a good spot to interact with wireless transmitters and beltpack monitor receivers worn by performers.

Nothing beats a dive bar for late night jams. Gracing the walls, a garish display of defunct beer logos in kitschy neon tube. Neon tubes use high-voltage electricity to excite the atoms of noble gases sealed inside. Every neon sign has a transformer that steps line voltage up to as much as 15,000 volts. These transformers, especially old ones, are usually the problem. But occasionally electrodes in the sign may arc onto condensed beads of mercury or over to the edge of the tube, causing broadband RFI. Unplugging the sign will put a stop to the interference.

Although you won’t find too many four-story video walls in small venues, LED lighting is just about everywhere, now. DMX controlled LED fixtures are very popular as multi-purpose effect kits that change colors and swivel around and other such trickery, but they can spew a ton of radio waves. Since theatrical LED lighting may be part of the show, it’s difficult to turn them completely off. Instead, a high gain directional antenna is often used to reject LED interference and focus on the performers.

In dense urban areas, or clusters of buildings/rooms common to contemporary churches and corporate campuses, it is not uncommon for wireless audio devices in use by other venues to interfere with their neighbors. The best thing to do, if possible, is reach out to your neighbors and trade frequencies to make sure you aren’t stepping on each other’s heels. Where this isn’t practical, another option is to use a neafield antenna like the RF Spotlight to block out incoming frequencies.

We will wait for a future article to fully explain intermodulation. In short, intermodulation artifacts are unavoidable, unwanted radio frequencies that develop through the interaction of two or more transmitters. Proper setup of multi-channel systems must use a frequency coordination program to predict where intermodulation products will be. Professional Wireless’ IAS is a popular option, as is Clear Waves.  Mac users can try Vantage by RF Venue.

Local news station stop by to cover the show? Look out. Camera crews are known for destroying carefully coordinated frequency sets. Not only do they carry their own wireless microphones, but their video links are often wireless as well. Handheld video monitors or camera connections back to the truck can gobble up enormous amounts of spectrum, and an increasingly common technology called cellular bonding, used to transmit live footage back to the studio, consumes every unlicensed band it can find.

Leaky power transformers on poles outside

Electrical grid transformers are responsible for squeezing a tremendous amount of electrical energy down into the 110/20 60Hz A/C that lets you watch TV. Many are heavy coils of wire soaking in a vat of inert oil. Sometimes, they “leak” RF energy as an unintentional byproduct of the voltage transformation. The RF from a sketchy transformer can be so strong it will penetrate venue walls after traveling a few hundred feet. Of course, if you do determine a power transformer is to blame, keep your distance.

WiFi WAPs and routers are only of concern when using 2.4 GHz wireless microphones. In some venues like hotels, they can be quite powerful and wreak havoc on your 2.4 system.

If only we could cover every possible source of interference in one article, but we can’t. Anything that uses electricity has the potential to create harmful radio interference. Anything at all. Sometimes, when you have eliminated all of the usual suspects, the only thing left to do is try and physically track the stuff down. And we explain how to do that in this previous article.