There is a mountain on the edge of the mighty city of Los Angeles. This mountain is home to wildlife, hikers, young lovers looking for a picturesque place to park their car, a defunct observatory, and high power transmitters and repeaters for nearly every UHF TV station in Los Angeles County.

It is called Mt. Wilson. The radius immediately around its peak contains the most congested UHF spectrum in the country, maybe pulling a close second only to mid-town Manhattan. And it was the misfortune of our friends Jeff Miranda, President of Neologic Sound, and his Systems Engineer Paul Martinez to be called out to an integration job at a church not ten miles from Mt. Wilson’s main transmitter site. We can think of no worse scenario for operating a UHF wireless microphone - and this church has six.

“Pretty much every single frequency you went through had some kind of terrible interference,” said Jeff. “At one point one of the other guys had moved the receivers up to the stage and that somewhat helped, but not really. It made the difference in that it was cutting in and out and sort of functional, that they could somewhat use it, sometimes, but it wasn’t what we would call ‘reliable’ by any means.”

Even though Jeff and Paul consulted an FCC database and placed their frequencies inside unoccupied TV stations, they still encountered disabling interference. With so many high power transmitters in such a small space, that isn’t a complete surprise. Electromagnetic emissions often occur across vast swaths of spectrum in physical locations that are directly adjacent to high power RF transmission sites hosting multiple services. So, in the case of Mt. Wilson, the picture that a whitespace frequency finder paints will be much rosier than the actual spectrum on the ground. 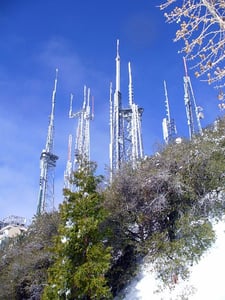 Systems Engineer Paul Martinez told us some of the trials and tribulations on their multi-week odyssey. “We had a total of maybe 4MHz worth of spectrum to work with,” he said. “Even though that isn’t actually that bad, the problem that I had was that I felt every time I came and set a frequency, I didn’t have a good feeling that it would last when I left. It would work one day, and then stop working the next.”

“And you know what’s strange,” continued Paul. “They had these old Sennheiser microphones, G2 generation EW100s that for some reason, seemed to work relatively well. They were super old, but just kept on truckin’. Then we went to do the upgrade with a new, modern system, and it stopped working.”

Neologic tried two different types of new microphone systems, and yet neither performed quite as well as the old Sennheiser G2’s. We hypothesize that newer microphones may have reduced sensitivity to poor signal-to-noise ratios, a problem that is related to the capture effect, which Paul described quite elegantly as he talked about how an active transmitter will effectively quiet even very strong interference on a frequency modulated receiver - so long as the signal of interest is a few decibels above the noise floor or a competing signal.

“A strange thing would happen where, once you turned off the transmitter, this crazy white noise would interfere. Noise so bad it could blow out a speaker. And when the transmitter’s off the receiver would be picking up three or four bars of interference. Then, when the old G2 microphones would turn back on, the interference would disappear and the system function relatively well.”

Paul is describing the receiver’s ability to resolve and ‘lock on’ to the strongest of multiple signals or noise and preference that signal above all others. The capture effect is a hallmark of FM receivers that can be used to the advantage of wireless microphone receivers. Very early in RF Venue’s history, we put the capture effect to use when we designed the RF Spotlight, which allows multiple microphones on the same frequency in a small area, or microphones to operate under brutal RF conditions.

In fact, we sent a Spotlight out to Paul for him to test. The results?

“It definitely improved things. We searched around for some atrocious frequencies to see if the Spotlight would help in those scenarios. I found that it didn’t really help there, but on all the frequencies that were borderline atrocious the Spotlight made the mics reliable.The best frequencies we had without the Spotlight were patchy. It would work, you would take four steps, it would drop. Now, anything that was in that range has cleared up and is working just fine with the Spotlight.”

Neologic is still working to perfect the system in that particular church which has proven, understandably, to be a challenge. Our hats are off to them, and we hope to hear updates on the project soon.