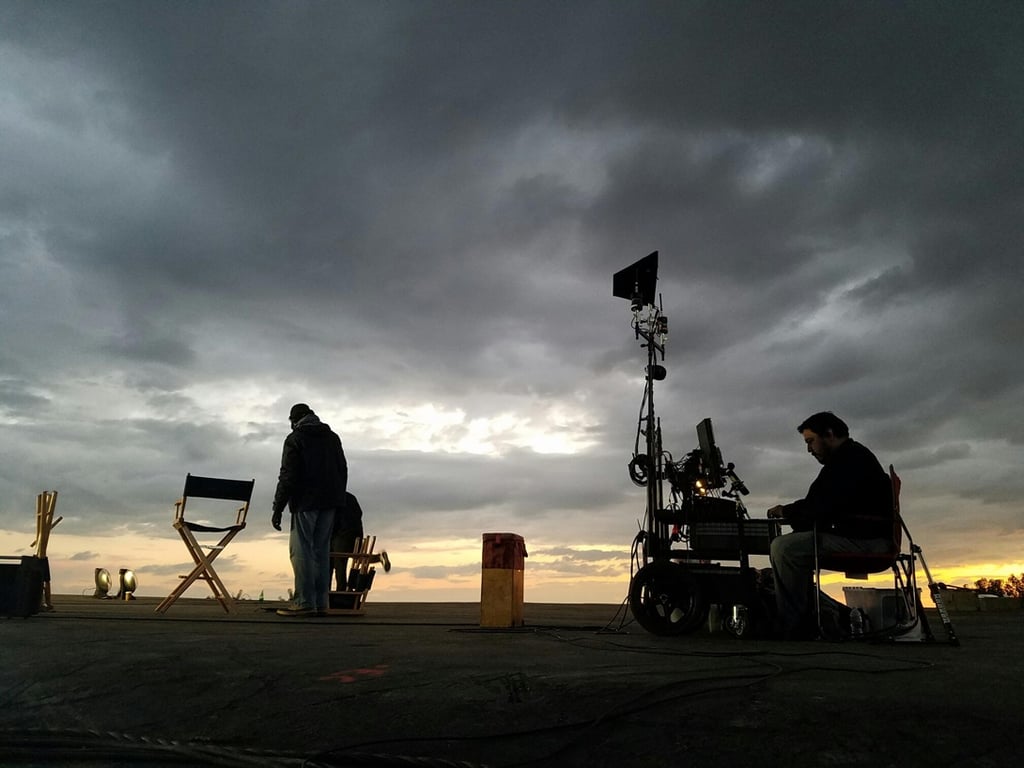 There’s an old saying here in LA: everyone’s an actor, a drummer, a voice-over actor, an illustrator, a cartoonist, a DJ, a performance artist…You get it. Everyone here is SOMETHING. While the pool is certainly larger here, the amount of fish all swimming around, looking for their little bite of the proverbial pie is just as proportionally great. The pull of that sunny weather is no myth.

The audio world is no different, and even though a level of surface camaraderie exists, there still is competition for work. But perseverance and a little bit of good timing is what has led Chris Howland, one of the busiest sound mixers in Los Angeles today, to stay active in the field. Howland was kind enough to take time out of his schedule to chat with me about being on set, his favorite parts of LA, and getting a little help from Adam Sandler.

Hey Chris, thanks for taking some time to chat. So, by way of introduction, how long have you been in LA?

I’m originally from Huntsville, Texas and came to LA by way of Houston. I made the move in August of 2000.

Looking at your IMDB page reveals an impressive list of credits, including a varied range of shows, such as Community, Dr. Phil, and Grey's Anatomy. How did you get into sound mixing? What was your road into audio?

Like most people in sound for film, I’m a transplant from the music side. I graduated high school in 1992 and I immediately started working with many of the talented singer songwriters that came out of Houston at the time. Primarily I was a drummer but I had rudimentary knowledge of piano (from lessons during my childhood) and guitar (because what high school girl doesn’t absolutely love a guitar player?!).

Once MP3’s hit the scene, It didn’t take an economist to realize that my living, which was based on artist ‘merch’ sales while on tour, was about to dry up. I started about thinking of alternate plans for my future and I remembered all those TV shows I had played on over the years. The set was a fun place to be. It was a concentrated collaborative creative effort from people of a wide variety of backgrounds.

How did you get into the scene once you got here? Did you find it hard to break in?

I found odd jobs running front-of-house in Hollywood, for places like the Troubadour and the Mint. I was a 32 year old guy, spending my days looking for PA opportunities on film sets while trying to make a living in a very expensive Los Angeles. It wasn’t easy. I knew sound but I knew nothing about how the film set operated or how sound recording actually fit into it. I did the best I could trying to meet the sound mixers on each shoot while navigating the responsibilities of unloading production trucks and setting up trailers and temporary production offices.

How helpful were other sound mixers once you were able to get PA jobs? Were you able to learn by peeking over anyone’s shoulder?

Most sound mixers I met were cordial but not really willing to share their approach to the job. Once I would tell them I had a background in music and wanted to learn about production sound, they would clam up and either be rude or just not very forthcoming. This was 2003 and finding mentorship in production sound was NOT easy.

Was there a turning point? A moment that felt like maybe something was changing?

During the third year, I got referred to be the Video Game Coordinator for a small movie Adam Sandler’s Happy Madison was producing called Grandma’s Boy. I had the oddball job of researching, playing and recording all the video game footage for video playback. It was very pre-production heavy with over 50 games and 30 TV screens with varying frame rates, resolutions and aspect ratios. In the end, it took 2 months for us to get everything in line.  By the time the first day of principal photography rolled around, I had a HUGE box of video tapes and I was charged with the responsibility to have the correct footage on the correct format tape to the correct TV at the time that scene was ready to shoot. Not an unimportant task but I had it pretty well dialed in. I was waiting attentively for my shot to come up when I noticed a 25 ft trailer right outside the location. Just inside the door was an 8.5 x 11 printed out picture of a guy playing drums so I asked the nice old man on the trailer who the drummer was and he said, “My father, Sam Ulano.” I knew his name sounded familiar and as it turns out, Sam had written MANY instructional books on drumming. Some of them I had seen over the years. It turns out, the nice old man on the trailer was not only a drummer but the sound mixer as well? How cool!!!

I decided to play it cool and we just chatted about drums for the first few days but when I finally got up the nerve to tell him I wanted to learn about sound he welcomed my questions and had great information and a wealth of experience to share. I had no idea who he was and I really didn’t care. I was just so happy to find someone who liked talking about production sound and was willing to answer my questions. Not just him either, His crew was very approachable as well and I knew, after 3 years of searching, that wasn’t something you find every day. This amazing sound crew consisted of Mixer, Mark Ulano CAS, Boom Op, Tom Hartig & Sound Utility, Adam Blantz. I spent the next month watching this crew work together to concur each and every 14 hour day on that shoot. We worked side by side and their knowledge, endurance and grace was something to be inspired by. As the shoot, came to a close, Mark offered me an internship position on his following movie called Big Mommas House 2. I accepted and along came another 3 months of work where I could actually be a part of his sound crew and focus on learning the production process from the sound crews perspective. Once I finished, two things happened: my wife and I welcomed our beautiful son into the world and I bought a small bag rig and started working on my own in production sound. That was 2005 and every year since then has represented steady growth in my knowledge, contacts and in the caliber of jobs I get hired for.

What are some of the challenges you've faced working on TV shows?

There are a few challenges to working on episodic TV today. The biggest challenges are shooting with multiple cameras, multiple actors and a high count when it comes to the numbers of scenes & script pages to shoot on each day. On Big Mommas House 2, the crew would be noticeably stressed with a three-page day. Episodic TV schedules have an average of six to eight pages per day, every day, and it’s not unheard of to have two or more location moves in a single day. The early narrative shoots I worked on were very location-heavy as well, so we had to be extremely portable and adaptable to any shooting location we might find ourselves in. 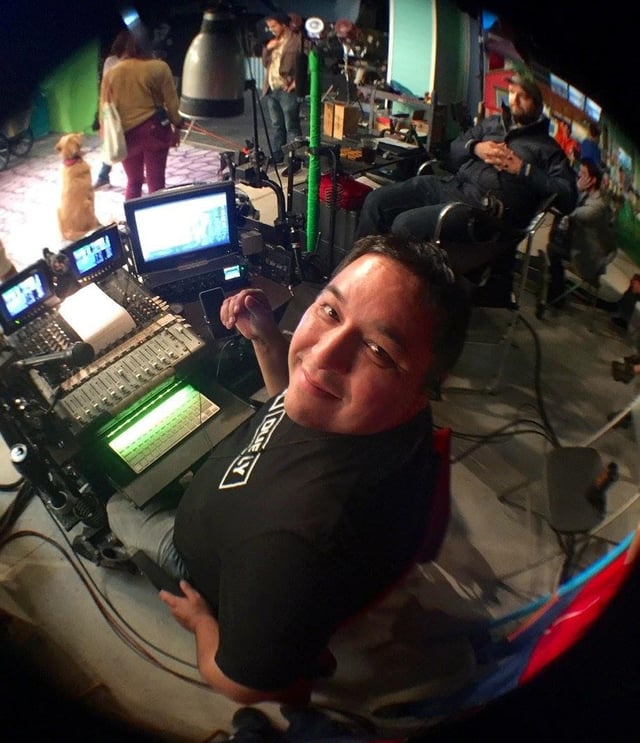 What are some of the most memorable moments you've had?

I don’t know about moments but I do have realizations every now and then about how incredibly complex and rewarding the shooting process can be and how cool it is that so many crafts and pieces can come together. Every time the slate claps, we are off on another take. Another chance to capture something magical that will never happen the same way again. That’s what keeps me coming back for more—the seemingly endless display of talent and possibilities.

Totally. When you describe it like that, it does seem magical. All of those pieces have to fit together perfectly. That’s a good opportunity to talk about one of those pieces, wireless audio. Where and how does wireless figure into what you do?

Wireless is a huge part of our daily workflow. Fifteen years ago our workflow would have been a hard-lined boom and maybe two lavs if you were lucky. Today, most episodic shows expect you to have a lav for every actor with scripted dialogue and the boom ops (sometimes two or three of them) all have plug-on transmitters. Once you add in wireless camera feeds, IFB feeds to the creative nucleus at video village, and another private line IFB for your crew, our basic skill set now requires that we become de-facto RF engineers and understand, at least, the basic principles of setting up and maintaining a multi channel RF system in any spot we might be landing in. Sometimes you land right next to a cell tower, power station or a TV/radio transmission tower and things can get fun real quick. The challenge is staying one step ahead of those developments and always having a Plan B ready to go.

How do you like working with the Diversity Fin? How has it made what you do easier?

I love having the Diversity Fin antenna as an option in my sound package. Having both receivers on one mount makes for a really easy remote set up in places with limited space. I have two of them—usually one on the stage and one on the truck for easy access during location work.

What do you have coming up?

I’m always involved in some sort of narrative filmmaking, whether it be episodic TV or features. Recently I’ve been getting jobs covering other mixers who have to move on to other shows. I mixed the last two episodes of season one of a John Singleton show called Rebel for BET. Then I moved on to mix the additional photography of feature called LABryinth, with Johnny Depp and Forest Whitaker, which is based on the Randall Sullivan book, of the same name, which illustrates the police investigation into the murders of Tupac Shakur and Notorious B.I.G. Now I am looking forward to working on 4 episodes of Hulu Series called Casual in April.