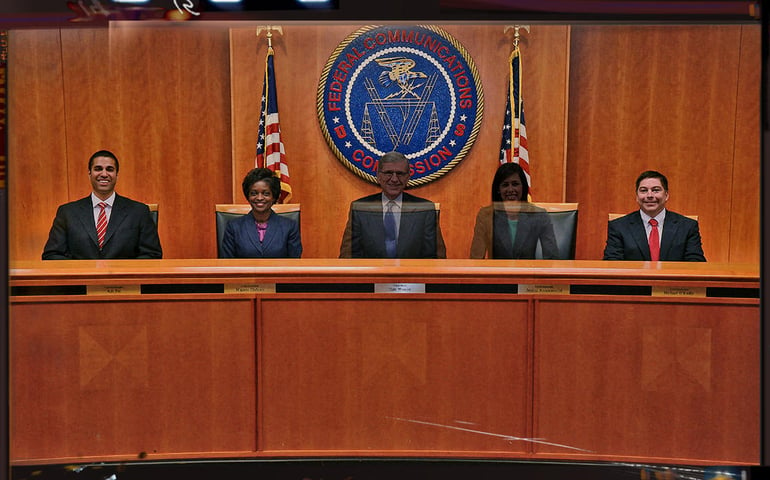 For the American citizen and entertainment production professional both: there are three questions these and forthcoming changes bring to mind.

Answering these questions exceeds the attention span of a single post. I'll begin with Pai, and wireless audio.

Then hopefully find time to cover the acts of political subterfuge which leave us with a 2-1 FCC, the topic of net neutrality (relevant, if you use the internet).

If you have questions, or corrections, comments are just a downscroll away.

They say a police officer can be your best friend or worst enemy.

This familiar but useful aphorism depends on where you are, who you are, and what you've done or plan to do.

In this saying there is a parallel to wireless communications: that, "one operator's signal is another operator's noise."

Depending on who you are, and what you do with communications technology, the FCC is often either your best friend or worst enemy; It is a federal regulatory agency that may judge and meter punishment for abusing U.S. Communications Law (which corporations, citizens, and law enforcement agencies alike abuse with abandon), and makes decisions that may hurt or favor one group over another.

Therefore, as it creates and executes a new agenda, who is a friend to the new Commission and who is an enemy is likely to change.

Upon what bearing the winds of change may blow we are unsure, but have no want of abundance of intelligent speculation and prophecy.

The biggest verifiable news on the new FCC is the appointment of former leader of former Republican minority (minority of two) Commissioners, Ajit Pai, to the Office of Chairman. 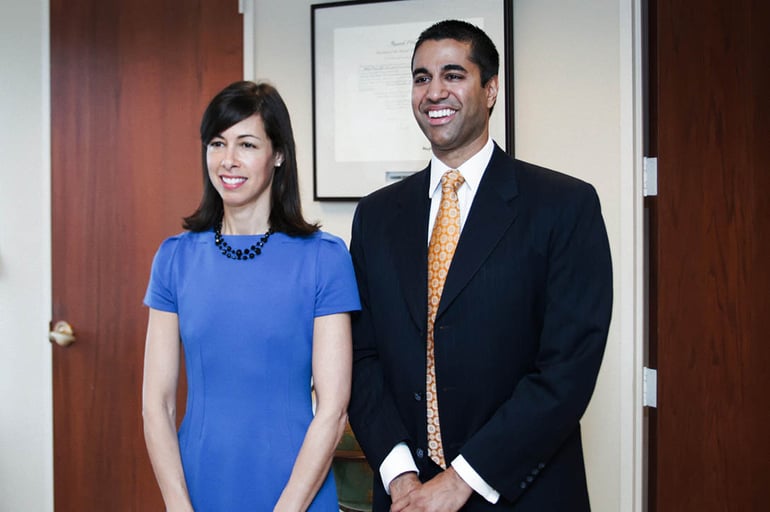 Jessica Rosenworcel (left) and Ajit Pai (right) wait to be sworn in as the two new Commissioners at the FCC headquarters in Washington, DC. May 14, 2012.

For a refresher on the structure of leadership at the FCC, go to the end of this article by clicking this footnote, here.1

(If you click on that little 1, you'll jump down to the end and once there can click on a button to bring you back up)

Ajit Pai's agenda will differ on key issues, especially what is popularly known as "net neutrality." He is now, and after the remaining two nominations, in a position to ask for authority required to execute any reasonable (or who knows? unreasonable) agenda from Congress, unimpeded in the request (execution and fending off legal challenges are other matters), and supported by his Republican majority at the FCC.

Whether Pai will use that power, or make request for more power, I do not know.

However, for those who cringe as Trump appointments roll in: take heart: Ajit Pai is not a reckless, or unintelligent man. At this time, which is admittedly very early on, he is not expected to bow unanimously to special interests and/or pursue a destructive ultra-conservative target at the FCC's authority—not without consideration, at least.

He is more a complicated and human Chairman than that.

Headlines from reputable publications reflect both his complexity and fitness to lead: The Verge published a piece last week titled: Trump’s new FCC chief is Ajit Pai, and he wants to destroy net neutrality. While The Hill hosted an opinion by Georgetown Professor Adonis Hoffman titled Humble Pai one of the best-prepared FCC chairs in history, and makes the categorical statement that:

Incoming Federal Communications Commissioner (FCC) Chair Ajit Pai will rise to the top spot as one of the best prepared and best-liked commissioners in FCC history.

The Benton Foundation, a foundation I trust, explains:

Republicans are eager to turn the page at the Federal Communications Commission after eight years of policies under President Barack Obama that they say have stifled innovation and burdened the tech sector. President Trump’s appointment of Ajit Pai as FCC chairman has raised hopes that many of the rules and regulations enacted under President Obama — including the controversial network neutrality rules — will soon be on the chopping block.

Although appointed by Trump, his first actions as Chairman in the last week demonstrate autonomous thought to the contrary; These actions suggest he is not a dog on Trump's leash.

Whether they are sincere, or merely smokescreens to hide insidious intent, we’ll see. They include:

Although there is strong sentiment (RE: The Verge) Pai will attempt to challenge and roll back the cornerstone accomplishment of Wheeler's administration, the validation of the idea of net neutrality through a 2016 United States Court of Appeals decision upholding the FCC's authority to reclassify broadband as a "service" or utility, through the second Open Internet Order2, there are just as many opinions which counter this unfavorable opinion.

If one examines Pai’s record on the Open Internet Orders, which are well argued and thorough, and in may cases, legally correct (i.e. the FCC does not and should not regulate an open Internet through the mechanisms Wheeler and Genachowski proposed in 2010) and aligned with the first two Appellate Court decisions, which struck net neutrality down.

The polarized opinions in the media are, I think, a symptom of the difficulty in separating Pai’s opinion on net neutrality from a lawyerly interpretation of laws; does he oppose the Open Internet Order because he thinks the Genachowski/Wheeler Agenda is illegal or beyond the FCC's authority? Or does he oppose it because of the checks he expects to receive from, say, Verizon (where he worked as a lobbyist), and two or three other people for whom an open Internet is tough for business?

Although most wireless audio operators I’ve spoken to (thousands) despise the Incentive Auctions, let’s not forget it’s somewhat of a miracle that such a disproportionally small special-interest group was able to get the Federal Communications Commission to not only consider our interests, not only to write about our interests in a NPRM, but actually create new laws to protect our interests in a Report and Order “to accommodate the long-term needs of wireless microphone users.”

The final laws greatly expanded protections afforded to licensed operators, reduced the barrier to entry for licensure, and opened up new spectrum. Part 15 (unlicensed) rules were modified as well, though less favorably for Part 15 users, who account for probably >99.9% of all users. Since most systems sold today are unlicensed, the teeny tiny team of lobbyists from wireless audio manufacturers did not get all they were hoping for, whereas licensed users (Part 74), helmed by a less public, but more effective group, I will not name here, which had a more compelling argument linking the criticality of licensed “low power auxiliary device/services” to the productivity of economic ecosystems of film and broadcast corporations. This argument has significant influence in Washington.

After Pai was appointed on the 23rd, the NAB’s vitriol machine came to a screeching halt and did a U-turn. NAB President and CEO Gordon Smith:

"Without qualification, NAB supports President Trump's selection of Ajit Pai to the position of FCC chairman. Ajit Pai is a known quantity who brings integrity, good humor and a fierce intellect to the Commission. We look forward to working with him and his colleagues on a pro-growth FCC agenda that benefits tens of millions of Americans who rely on free broadcast radio and TV for the most popular content, credible news, and lifeline local emergency alerts."

But as I was saying, Chairman Pai on wireless microphones: his direct words:

…wireless microphones serve important purposes. They enable broadcasters and other video programming networks to meet the needs of consumers by covering breaking news and other live events. And they are critical tools for businesses and productions across the country.

The upcoming incentive auction will leave substantially less room for wireless microphones. It is therefore critical that we find them new homes. This Order isn’t a perfect solution, but it does adopt a number of rule changes that should help wireless microphones take advantage of additional spectrum bands. I therefore support the Order and am voting to approve.

His statement is 204 words long, but I omit the first 104 words because they are a string of bad jokes and references to Pai’s personal CD collection. He even went to what I am absolutely sure is the unprecedented length of ordering his staff to source and cite the Prince Symbol in a federal document.

This is the most insane thing I can dig up on Pai, and frankly, it's not that insane. If you read around the edges, the 104 word joke lead-in, Prince citation, and more serious final two paragraphs are thinly veiled continuations on his opposition of the Incentive Auctions.

Former Chairman Wheeler’s statement on the same docket (which is much longer and also quoted here only in part), strikes a formal tone and is more of a tightrope:

...We continue our work to accommodate the long term needs of licensed microphone users by increasing the utility of bands where they already have access and expanding access to other spectrum bands. Added to the steps we took last year to allow more microphone users to become licensed, today’s item solidifies our commitment to address the important needs of microphone users.

No party gets everything it wants in these items. The results of auctioning 600 MHz spectrum means the 600 MHz band operating parameters will be new to everyone after the auction. For this reason, today’s Part 15 item lays out a number of steps that must be taken before unlicensed operations may begin. It also provides common sense procedures that stop harmful interference if it were to occur.

Collectively, the actions we take in these two Orders promote efficient use of our nation’s spectrum resources, address the important needs of the unlicensed and wireless microphone communities, and protect other licensed users in these bands – all of which are critical as we move toward the Incentive Auction next year.

Here is the wisest key sentence from the previous Commissioner’s statement above:

No party gets everything it wants in these items.

A regulation agency, and a Chairman, cannot magically give all stakeholders from all industries the same favor. But they can and should do their best to maximize positive change while minimizing negative fallout.

The U.S. Agency called the FCC can be our best friend, or worst enemy.

A message to the Honorable Chairman Ajit Pai: “Mr. Chairman, let’s be friends.”