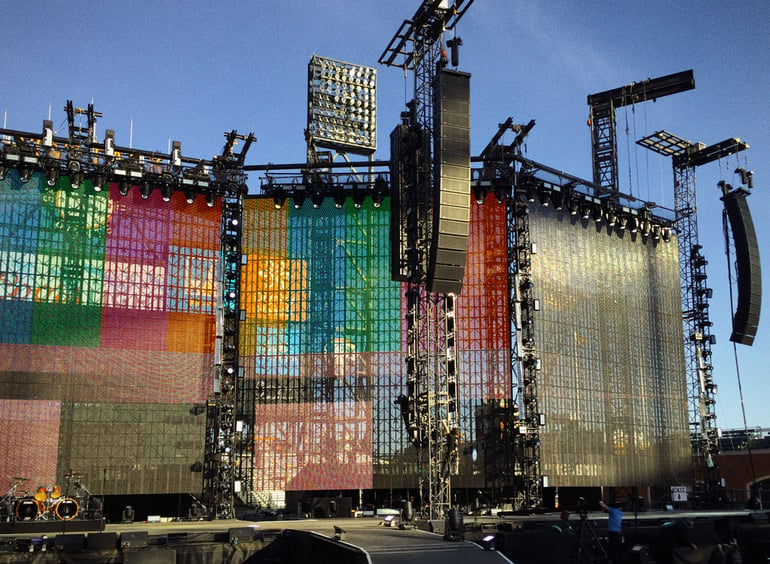 Metallica’s live shows are stuffed from beginning to end with booming spectacles and wild interactivity that few other rock bands can match.

For the 2016 Super Bowl “The Night Before” Concert at San Francisco’s AT&T Park, hosted by CBS Radio, frontman James Hetfield, guitarist Kirk Hammett, and bassist Robert Trujillo crisscrossed a whopping 185’ of horizontal stage width in characteristic strut as they handed off musical riffs between one-another and baited the crowd.

“The Night Before” made no departure from Metallica’s hyper-stimulating style, where lasers, humongous LED walls, and yes, hellish plumes of pyrotechnics abound. On previous shows, like the “Through the Never” 3D IMAX experience, you may also hear the the crack of ionized gas expand across Tesla coils mounted high above the stage.

While we can’t deny the earth-quaking efficacy of these essential elements of metal rock theater, nor that anyone executes them better than Metallica, nearly all of them arrive at the expense of one of Metallica’s most valuable assets: radio spectrum.

Metallica’s shows requires heavy use of RF, and their literally explosive and high-voltage stage machinery devastates whatever quality remains after they coordinate freqs. 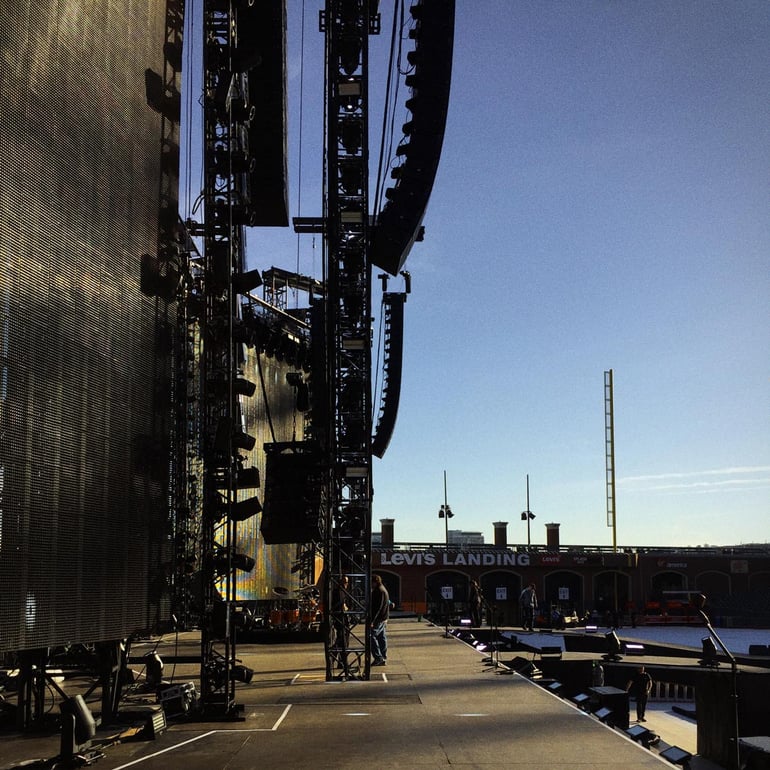 Hetfield, Hammett, and Trujillo use up to 14 instruments each, per show, and every one of them is rigged with wireless guitar transmitters. Every artist also has wireless IEMs, and nearly every member of the crew. All three guitar techs, the “pyro guy,” and even “wedge guy,” who cooks up a low-end mix so bassist Trujillo can stand in front of old-school wedges and feel the sonic onslaught with his body, have packs.

Each guitarist is assigned a primary and backup frequency, and each artist’s guitar tech hot-swaps their two channels using about six pre-selected frequencies in the Shure J5 band per musician, using discontinued but excellent UR4D systems, that the three techs agree on before each show. Techs are constantly handing guitars to the band during the set, which, as Chad explains, has no intermission and few downtempo beats-even when strings break.

Wireless guitars and in-ears allow the dark intimacy between musicians and crowd as they move rapidly across the stage and into the audience on platforms, but put a strain on Metallica’s world-class crew.

“When I started with the band about, oh man, over a dozen years ago, it was known that we had wireless problems, namely drop-outs,” says guitar tech Chad Zaemisch, who’s responsible for Hetfield's instruments. “Wireless has always been a bit of a mystery, but, a lot of the problem is that they use the entire stage. There are many vocal mic positions across the entire stage. Between the scaffolding, video walls, and huge props and things, line of sight is always an issue causing dead spots.”

The full width of the stage, as seen from the Snake Pit

One such place is the lower, inner chamber of the horseshoe round, which the crew unblinkingly calls "The Snake Pit." The Snake Pit extends out from the central horizontal plane of the stage, which makes wireless coverage a problem since it introduces another coverage axis, and forms an interior ring stuffed with hardcore fans. Band members often descend into the pit and play amongst the writhing bodies.

“We have a bunch of other stuff to worry about besides wireless during the show,” continues Chad, in understatement. “We’ve done all seven continents in one year. Our tours are global. We have two whole separate sets of backline that leapfrog around the world. It could be raining or snowing while we’re working but none of it gives you goosebumps more than a bad wireless situation. The band is very demanding in how they use the stage. Guitars dropping out is something we really, really, really try to avoid.”

[Audio Gloss gloss: Dubious, I later confirmed with Chad that Metallica HAS played all seven continents, including, yes, Antarctica.]

“We’ve realized that we need to get on top of wireless because it’s what we know the least about. We approached RF Venue to help us with current technology.” 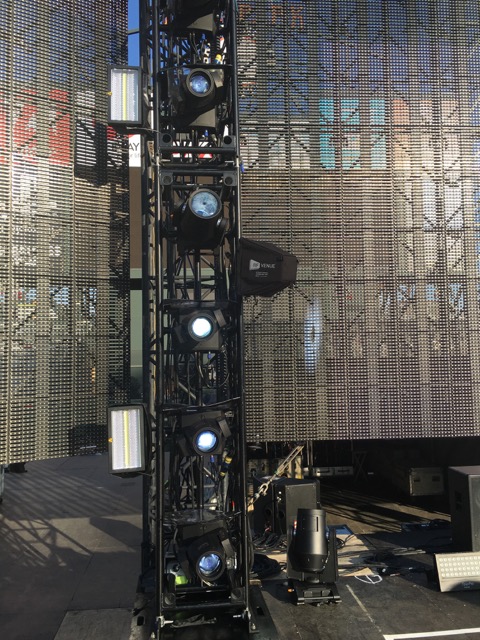 “We ran the CP Beams separated by a lot more distance than we’d normally do,” explains Justin, tech for Kirk Hammett. “I would guess about 50 feet apart from each other, facing downstage. We were a long way away. We fed the Beams into a Shure UA844 antenna distribution unit and the 3 of us fed out of that to the receivers in our racks.”

“When I was out there playing my guitar,” Justin recalls, “It was so clean I couldn’t believe it. No whooshing at all. Nothing. Just clean.”

Perhaps the only spectral silver lining to Metallica’s system is that they don’t use wireless mics, for good reason: both frontman Hetfield and the band’s other members are always on an instrument. They never carry a mic. Instead, they prefer to hop from one wired mic-stand to the next, up to 12 in all.

We’re proud to report that Chad, Justin, and Zach (bass guitar tech) were pleased enough with both VANTAGE and the CP Beam antennas to begin testing them for their upcoming tour, which is slated to set sail after Metallica releases a forthcoming album.

I’ll give Justin the last word:

“These tools impressed us enough that we can feel confident moving forward. Which part of the equation the antennas affected the most, I don’t know, and I don’t really mind, because there were no drop-outs and we’re moving in the right direction.”