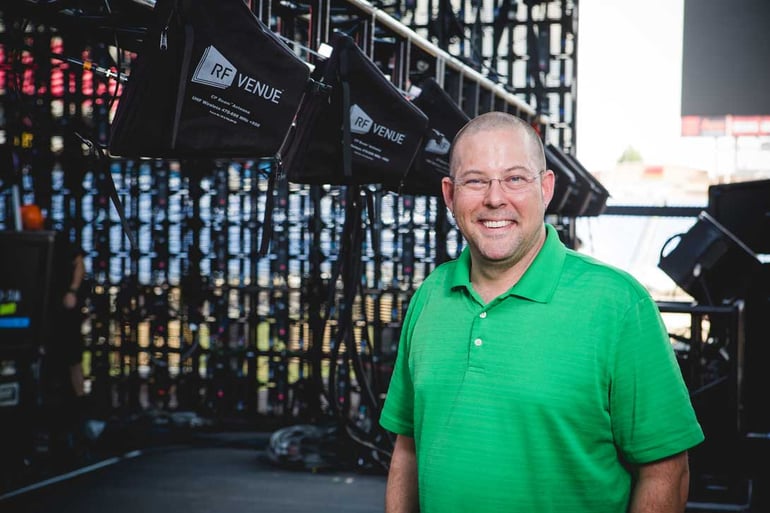 Jason’s design was unconventional and clever. It solved a lot of the RF challenges that come with large-scale festivals, and he was kind enough to speak with us about how it worked at length.

“This is my third year doing the LP field show,” he says.
“The lighting rig encompasses the stage, it’s a veritable faraday cage. We deploy a number of antennas up in the trussing. This configuration is designed to give the best possible line-of-sight link between the performers on stage and the antennas.”

Jason and Sound Image wanted to give guest artists and their engineers the ability to use their own wireless equipment (which artists are much more comfortable doing), but also recognized that, from a wireless perspective, the positions of monitor world and FOH at the venue were less than ideal for reception. Each act would have struggled with antenna placement.

So instead, he flew seven CP Beam helicals above the main stage, in an ideal, lofted position in the trussing, and three antennas in a great spot in front of the B stage. Artists used all their own equipment, but simply patched into Jason’s antenna system for their transmit and receive links. Jason even deployed a toggle switch of his own design to flip audio from one stage to the other.

“Your ultimate goal is to have a reliable link,” Jason waxes. “You have to have a certain amount of signal-to-noise ratio to open squelches and to provide adequate signal for FM capture. I do path loss calculations in my imagined worst case scenarios. With my artists furthest away from the receiver. I account for losses in free space. I account for gain or loss in each component from the antenna through the cable, adapters, splitters, connectors, to assure that I have a margin of signal strength in my worst case scenario.” 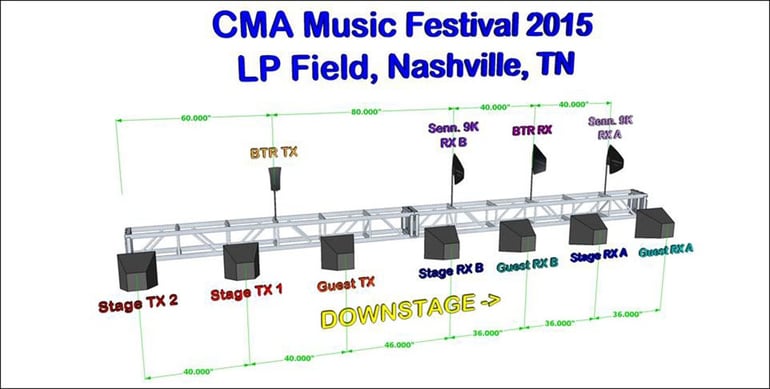 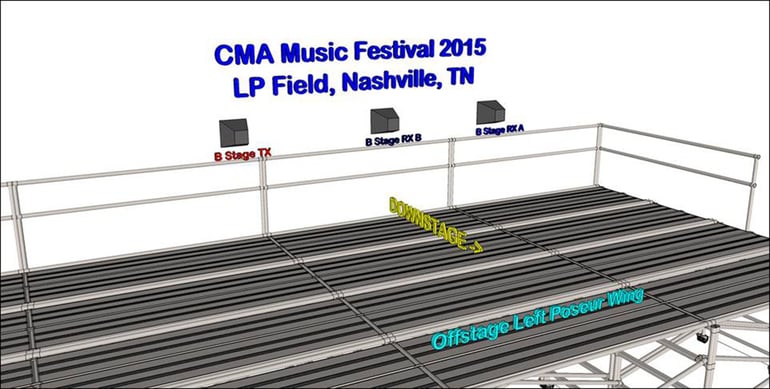 Because Jason so scrupulously calculates all of his variables, to obtain as good an SNR as possible, no RF amplifiers or active stages were used, even though the antennas were remoted with long lengths of coaxial cable. Instead, low loss coax was used to complement the inherent 9 dBd of gain found in the CP Beams.

“Even as well-behaved as our video walls are on this show they still generated a measurable amount of noise. When you have active amplification it exacerbates that noise problem. If I avoid the amplification the noise floor is so low it is almost inconsequential. That’s why I used higher gain directional antennas feeding passive splitters, which in turn fed active multicouplers.”

But why the CP Beams, specifically?

“Well, it seems like over the past year or so more and more of my clients own RF Venue equipment that they employ me to operate,” he explains. “I tested a CP Beam with my VNA tester and I saw that it was very close to the other popular helical antennas that I was using over the years, and when you combine that with how easy it is to pack these things, that they are collapsible, it didn’t take long to put two and two together to see that this was a much more convenient way to achieve the same ends.”

In fact, Jason has been using CP Beams for some time now, and has discovered the performance is superior to helicals he used previously.

“I didn’t risk my reputation with my biggest client at my biggest show solely because I measured the antenna and it looked good. It was because the more I used the CP Beam, in every case I was ending up with very reliable performance. All arrows pointed towards making this a standard, so we did.”