The Blue Angels, famed Navy aerial demonstration squadron that’s wowed airshow audiences since 1946, recently improved the range and reliability of their wireless audio system with antennas from RF Venue and design from Atlanta-based In Concert Productions.

The Blue Angels’ routines are carefully choreographed, highly precise movements that partially rely on radio communication between pilots in the air and a pilot on the ground, who in turn communicates events to the announcer.

“Back in 2013, new members for the Blue Angels wanted to get closer to the spectators on the ground while they were performing,” explains Jay Rabbitt, president of In Concert Productions, Inc. and Air Show One, Inc., the provider of specialized airshow PA systems and air boss communications equipment at shows across the USA.

“The announcers used to stand on a platform and did not move, severely limiting their interaction with the audience, so they wanted to take a wireless mic and walk up and down the crowd as far as possible so they could be seen.”

Over the last three years, In Concert Productions developed a bulletproof road kit that could withstand the rigors of outdoor environments and wirelessly congested airbases where many shows are performed.

A pilot on the ground, dubbed “Number Eight,” listens to a series of radio scanners for transmissions from pilots and then relays the intelligence via an IFB to the announcer, also known as “Number Seven.” The announcer holds a wireless microphone as he walks through the crowd. Blue Angels shows are among the largest aerial entertainment events in the country, with up to 11 million spectators attending each year. 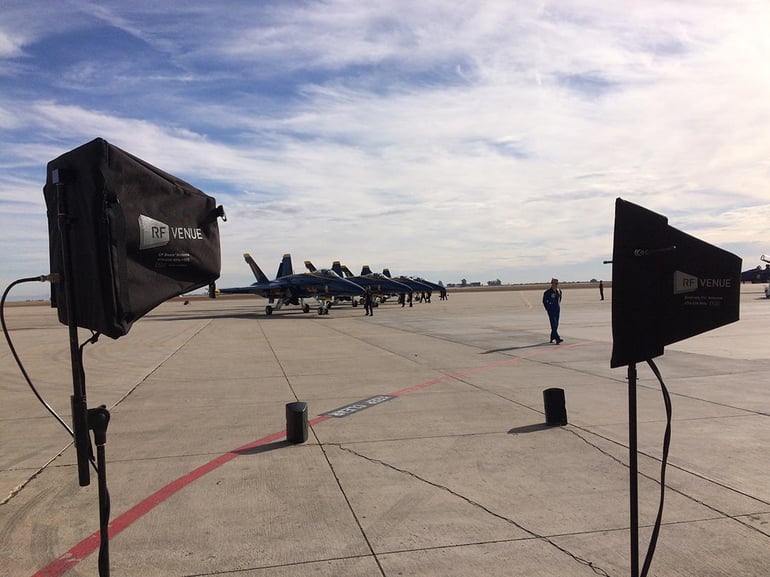 “Number 8, she’s also a pilot, talks to the announcer through the IFB,” continues Rabbitt. “So they can time when the maneuvers are going to happen, so that he starts talking at the correct time.”

“They were running into problems. The wireless worked well, but they weren’t getting enough distance. We were already using passive paddles, but they wanted more range. I said, ‘well there’s only one place to go,’ and that was with RF Venue because their antennas would give us the extra range, as well as be durable and easy to transport.”

The Blue Angels are currently in a three-month winter practice session, which takes place at a Naval Air Facility – a former bombing range – in the deserts of California. In Concert tested a high gain CP Beam helical antenna for the IFB link, and a Diversity Fin for the announcer’s wireless microphone, and the Blues decided to take the antennas permanently on the road.

“The people who are doing sound on the tour are airplane mechanics with the team,” Rabbitt says. “One minute, they’re replacing engines and sheet metal, then they get assigned into the position of being a sound person. The stuff has to be very easy to setup, very easy to pack, and it needs to be able to handle extreme abuse.”