Katherine Heigl, Tom Wilkinson, and Linda Edmond are in Cleveland shooting the indie comedy “Jenny’s Wedding,” until the end of November. The mixer on set is veteran Dr. Marlowe “Mauly T” Taylor, a producer and sound mixer based in Cleveland and member of IATSE 209. Dr. Taylor chose to outfit his cart with RF Venue antennas for all the talent and crew wireless audio, and hasn’t looked back.

“The Diversity Fin and CP Beam are my superman antennas,” Taylor said. “These antennas have simplified some very complicated issues. We were having a lot of RF static and the signal strength was very low. We were basically running our previous antennas out on 50 to 75 feet of cable all the time. Plus we were getting attenuation with these long cable runs and had to use all sorts of boosters. It was getting crazy.”

Taylor is now using a Diversity Fin to receive the Lectrosonics Venue and UCR411A HM plugs and talent packs on the “Jenny’s Wedding” set. A CP Beam pulls stereo from the Mix 12 and feeds to an ARRI Alexa via Sennheiser IEM receivers. And he uses an additional CP Beam for the Lectrosonics T4 IFB com system used to communicate with the boom operator and crew. Taylor is also using a Zaxcom suite including Mix12 and Deva IV plus ZOOM H6 and Timecode safety. 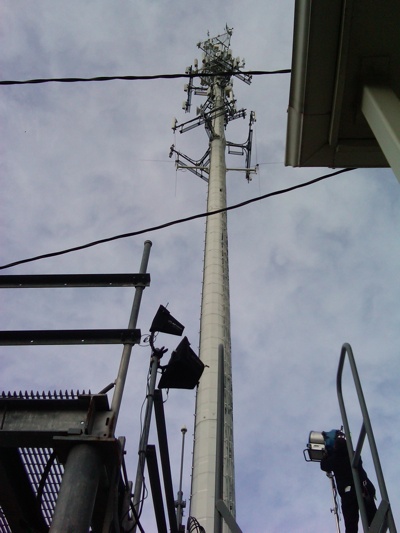 Interesting study in antennas for licensed vs. unlicensed devices: Diversity Fin and CP Beam on set, filming directly underneath a mixed use cell/RF tower.

The Diversity Fin is an antenna with one LPDA and one dipole element oriented at 90 degrees for optimum polarization diversity, and elimination of multi-path interference. The CP Beam is a high gain circularly polarized helical antenna that is lightweight and collapses for compact storage.

“Earlier we had a scene in a fire station,” Taylor continued. “Katherine and Tom were inside on the second floor, and I couldn’t get my cart up the stairs. I was able to raise my antennas up and shoot right through the brick wall without a problem, full strength. We started using both Diversity Fins and CP Beams rigged on a boom popped up 12 or 15 feet above the cart to get a clear shot to wherever they are. My cable just sits coiled up on the cart.”

Taylor has mixed features, docs, and TV shows, including the Sundance indie hit “Kings of Summer,” football feature “Underdogs,” and the 2014 made for TV movie “Love Finds You In Sugar Creek.” Dr. Taylor gets his title from PhD work at Ohio University, where he also received a Masters in sound. In addition to sound work, he is currently a professor and instructor at Cleveland State University.

Dr. Taylor was introduced to the RF Venue line by Pro Sound Services' Rich Topham. “And let me tell you,” Taylor said. “For the ‘Underdogs’ football movie we made with Joe Namath using the RF Venue antennas, all the audio went back to L.A., and the director and post mixer told us that 99% made it into the final film. They needed almost no ADR and said it was the cleanest and sharpest audio they’ve ever had. They actually thought I was a mixer from California, not from Ohio!”