The World Radio Congress (WRC) is held every few years by The International Telecommunications Union (ITU), who invite an esteemed congress of delegates from 193 member states (FYI, only three countries are missing) to discuss and vote on wide-ranging and critical topics relating to radio and telecommunications.

WRC-15 concluded on the 27th of November, lasted an entire month, spanned 40 topics, and was attended by 162 of the 193 Member States.

Among those topics was a debate on the continued relevance of terrestrial over-the-air television broadcasting.

Although the topic was low on the priority list, it was still on the agenda, and it had its day in the sun.

As reported by the EBU:

“…representatives reached a consensus that this spectrum, currently used by broadcast services such as digital terrestrial TV [DTT] and radio microphones, is too important to be allocated to mobile services. They agreed that there would be no change to the allocation in the 470-694 MHz band either now, or at WRC-19 in four years’ time. Instead there will be a review of the spectrum use in the entire UHF band (470-960 MHz) at the WRC in 2023. Only then will it be decided whether to make further changes to the Radio Regulations.”

The EBU is an interest group similar to the NAB, so their interpretation of the representative’s consensus is upbeat.

This could be taken as good news for traditional broadcasting everywhere and, by extension, wireless microphones that operate in UHF spectrum, but many organizations seemed to have overstated the positive ramifications of the decision for the United States.

The NAB was even more blunt and politically charged than the EBU in a statement released yesterday.

“NAB was pleased by the global unity demonstrated at WRC-15 for the importance of a vibrant system of over-the-air broadcasting. Of the 162 nations attending the conference, more than 140 countries rejected the wireless broadband industry’s anti-broadcasting UHF spectrum grab and recognized that frequency band is harmonized to provide television services on a worldwide scale. This broad consensus should send a strong message that while wireless broadband services are important for those who can afford the fees, that service should not come at the expense of a ubiquitous over-the air TV service that is available to all for free.”

Yet this statement seems odd coming from an American organization, because America was not part of that “global unity.”

The ITU’s decision to safeguard the UHF broadcast band until 2023 was agreed upon only in Region 1—Europe, Africa, and Asia. North America and the United States are in Region 2.

Any positive windfall for broadcasters from WRC-15 will not be felt here in America.

It seems that the ITU has identified UHF OTA broadcasting as a radio service and spectrum allocation worth saving in the absence of other alternatives, and that preserving the UHF band for broadcasting is part of a longer term transition to other mobile internet/broadband services.

As long as the digital divide exists, OTA broadcasting plays a critical role in delivering information and entertainment to impoverished, disenfranchised, minority populations, as well as the general public in times of peace and disaster, free of charge.

But the digital divide is unlikely to last forever. 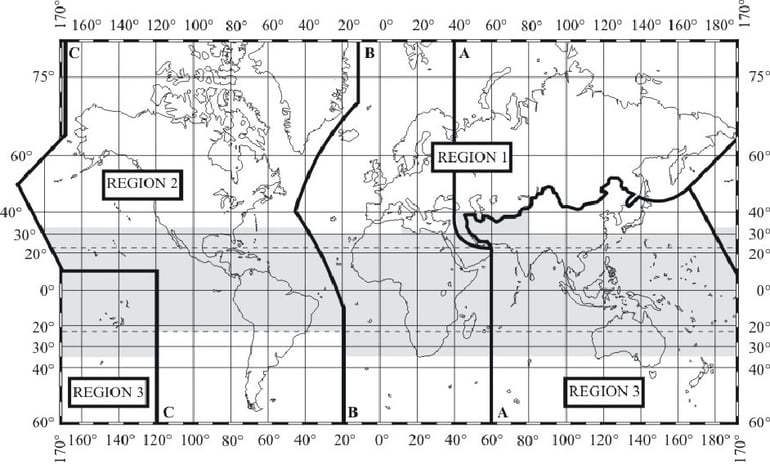 As described in the Lamy Report given to the European Commission in 2014, terrestrial broadcasting is recommended to exist in tandem with mobile broadband, and a reassessment of the UHF allocations from broadcasting is suggested to commence in 2025, right around that second to next WRC conference in 2023.

The United States, meanwhile, has the workings of some sort of mechanism to close the digital divide within its own population through the Connect America Fund. In their own words: “Broadband has gone from being a luxury to a necessity for full participation in our economy and society – for all Americans.”

Oh, and did I mention?- Google, Facebook, and Elon Musk have already launched balloons, satellites, and high altitude drones to blanket the earth with broadband internet coverage—free of charge to those who can’t afford it.

This morning, there seemed to be widespread jubilation among the broadcasting community at the WRC-15 outcome on terrestrial broadcasting in Region 1. But I think that jubilation jumps the gun.

Sure, the ITU is a big deal. What they say and do matters. And as an intergovernmental body they in some cases define the technical and legal standards by which radio and telecommunications activities are conducted globally, and in others, make powerful recommendations that participating states usually heed.

The coverage casts the illusion that the WRC-15 decision will somehow percolate from the roundtable at Geneva, cross the Atlantic, and infiltrate the minds of congressmen and women—wrenching them awake from their wireless broadband industry induced stupor to the daylight reality of the power of over-the-air TV in 2015.

The disparate connection between opinions on the importance of broadcasting in Region 1 and Regions 2 and 3 could also allude to a concerning trend: global disharmony and the US as lone wolf.

The United States picks and chooses what to align with on the international consensus on spectrum policy, sometimes following, sometimes affirming, but leading less often than it historically has—and receiving more pushback on what it proposes when it does decide to lead.

America and the FCC wants to lead forcefully as an agent of global peace through power, and, critically, power through superior technology. Spectrum technologies, and spectrum regulation concepts originating in the United States are a small, but still real, component of our assertion of influence on the global stage.

But what was missing from the US broadcaster reaction of the consensus at WRC-15 was not that a consensus on preserving the UHF for broadcasting was reached. It was that the United States was not part of that consensus; the resulting agreement (which as I understand it does not have the binding authority of international law) was a fragmentation of member states on the allocation of the remaining UHF band, with the U.S. dragging Region 2 into the minority due to its hellbent quest to recover UHF spectrum via the incentive auctions—an ingenious but unproven mechanism planned by no other nation.

In preparation for WRC-15, US delegates issued this proposal in March, which I found through the NTIA:

Recognizing the growing need for mobile spectrum below 1 GHz, the current deployment and future development of broadcasting systems, and the differing national priorities of the member states as regards UHF broadcasting, it is necessary for WRC-15 to adopt a regulatory solution that would:

To achieve these objectives, the United States proposes modifications to the Radio Regulations that would add an allocation to the mobile services and identification for IMT in the range 470-694/698 MHz except for the 608-614 MHz band in Region 2. The United States also proposes retention of the primary allocation to the Broadcasting Service in the 470-890 MHz frequency range, including the mandatory application of No. 9.21, which would ensure that the existing services, such as broadcasting, maintain coordination priority (i.e., remain super-primary) vis-à-vis IMT systems.

Globally harmonized allocations to the mobile service in the 470-698 MHz frequency range would enable introduction of innovative broadband services while preserving access to spectrum for the existing services, such as broadcasting. A new allocation to the mobile service would provide administrations with the flexibility to maximize spectrum utilization.

As the EBU release makes clear, the rest of the world did not agree with the United States' proposal that the UHF band should become new home to mobile broadband services. They rejected the proposal because terrestrial broadcasting in Europe, Asia, and Africa is important in ways that we, isolated by two oceans, and richer than any other country in the world, cannot fathom.

I think it's important to recognize that that rejection by consensus does not by default mean the United States will follow suit in preserving the remaining licenses of OTA broadcasters between the commencement of the auctions next year and 2023.

To conclude, and in other words, we are not on the same page with the rest of the world when it comes to OTA broadcasting, and that means broadcasting (and wireless microphones) are still in immediate danger of disruption, even though we have traditionally led the world in efforts to "harmonize" allocations, as well as other issues that I am not as qualified to discuss.

Is that because United States policy is so far advanced beyond the ITU's comprehension that it can it afford to dissent or contradict proposals from delegates from the other 192 ITU member states?

Or is it for some other more alarming, sinister, or dysfunctional reason that we blaze our own trail?—ahead, or behind.