Hubspot, the web product we use to manage our marketing analytics and CRM (customer relationship management), held a convention called INBOUND in Boston, as they do every year.

INBOUND was a large, world class corporate conference. 14,000 people attended. There were dozens of intriguing panels and talks. Headline speakers included Aziz Ansari, Amy Schumer, and Todd Rowe of Google, among many, many others. The scenic design of the show and conference hall was superb, as was the A/V design and services.

What’s strange about that?

Well, once we got to the conference we realized we knew a lot of the people working backstage—literally behind the big “INBOUND” letters perched up on stage in Hall B—the people that make the show go off without a hitch.

For us, INBOUND15 was far more than a conference. It was living proof that our customer outreach and marketing using the Hubspot platform is working, and a great chance to see our products in action. All of the wireless microphones used by the keynote speakers were sent through a pair of our CP Beams, a special type of antenna we manufacture called a circularly polarized helical.

Here is one of those CP Beams backstage, to the right of the display. 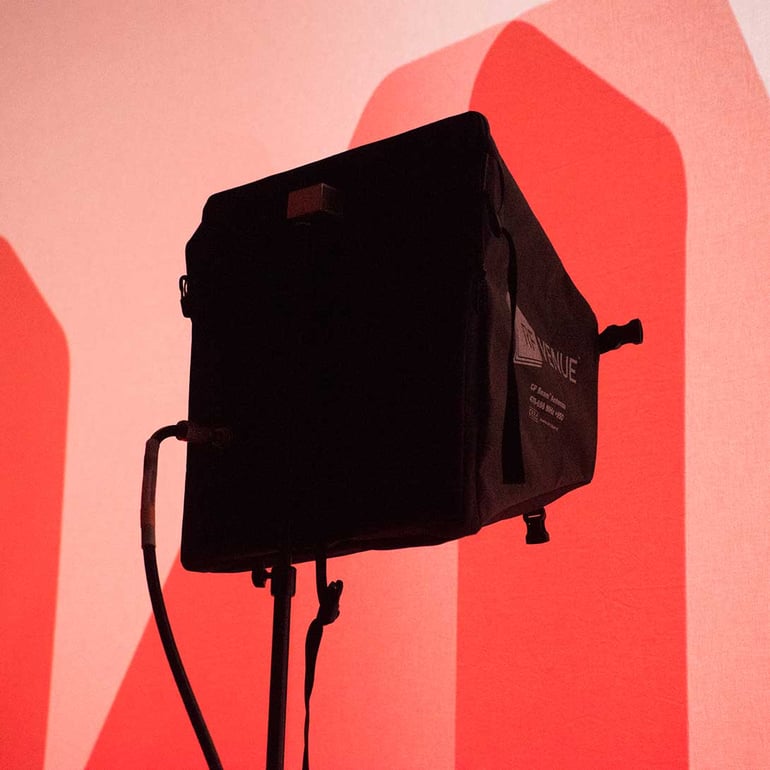 We thought it would be cool to write an overview for two audiences of the INBOUND15 conference from the perspective of the production of the live event.

The first audience, our audience, contains live sound professionals, A/V integrators, and other audio nerds who use RF Venue wireless antennas and distribution accessories everyday, but might like a glimpse behind the scenes at a corporate event of this caliber and scale.

The second, fellow users of the Hubspot marketing platform who attended the events and keynotes in Hall B (the main, big hall), who were dazzled by the lights and colors and flying cameras, and have marginal curiosity in how all that stuff works.

As we have discussed at great (great) length before, the days of stuffy, boring corporate events are a thing of the past. Gone are the shaky spotlights, the screeching microphones. The popup tables with scorched coffee and stale bagels? Nowhere to be found.

Because of flush stakeholders (in this case, the awesome and successful company Hubspot), and the power of live events as marketing and community building machines, the resources and technical expertise poured into today’s corporate events equal or exceed those of even the glitziest music concert or special event.

INBOUND15 was no exception.

Most corporate events outsource the pre-show design work—scenic design, booths, kiosks, animation and other audiovisual content—many months before the event begins. This design work is accomplished by many different design companies and freelancers. Most of the design work in Hall B was done by CG Creative.

Then, the design work is handed off to production companies, subcontractors, and freelancers, who actually bring in cameras, speakers, microphones, projectors, and lots of other cool things to put the designs to work.

At INBOUND15 there were two main areas where production companies worked: the Expo Floor and "Club Inbound," and the General Session room (Hall B) where all Keynotes and Spotlight Breakouts were done. Freeman Audio Visual was responsible for the A/V support and equipment on the Expo Floor, and they brought in Alford Media, a Texas based veteran event technology support company, for the General Session room.

Alford’s team arrived at the Boston Convention Center many days before the start of the event to begin the grueling process of “load-in,” which is when all of the equipment, carefully packaged in large, black, rugged flight cases, is unloaded from semi-trucks and “loaded in” to the venue.

Time is often short, so there is what appears to be (but is not) complete chaos, as supervisors and stage managers shout at people to put this case here, that case there. Technicians unfurl miles and miles of fiber optic, power, and coaxial cable where it needs to go.

Then, technicians begin assembling and testing the equipment. Cameras get powered up, cranes start flying, audio fader programmed, wireless microphone frequencies are coordinated and, these days, much of it is intelligently networked together via fiber optic or CAT-5 (ethernet) cable.

The stage manager will then typically begin blocking talent or stand-in talent to focus the lights and do tech rehearsals to make sure everything works.

We, RF Venue, work most closely with the second group, the people who actually put on the production, because our products are used to improve the reliability of wireless audio equipment.

Within that second group there are roughly three divisions: audio, video, and lighting. Each of the divisions sets up a “village” out of flights cases somewhere backstage. At INBOUND15, Audio Village, Video Village, and Lighting Village were behind the cyc (short for cyclorama, the big piece of fabric that was stretched across the stage). Here’s Audio Village: 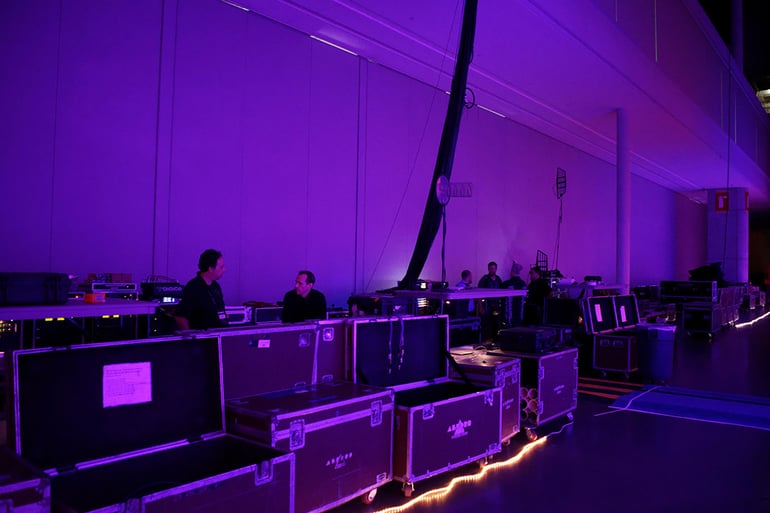 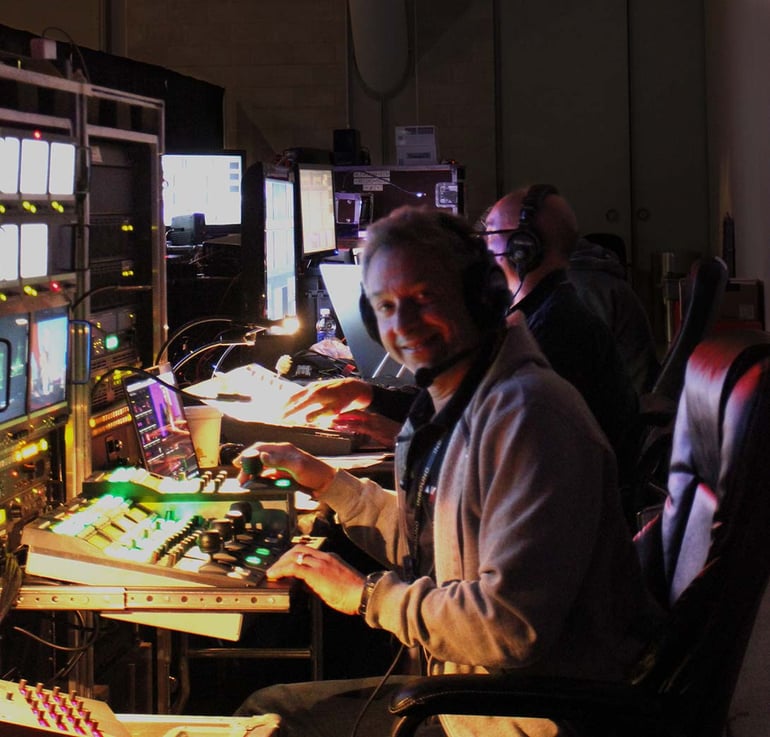 There is also a mixing console and control station located in the middle of the audience, called Front of House (FOH for short). The picture leading this article was taken from FOH by Allison McMahan, Communications Administrator at Alford Media.

I spent a number of hours backstage with the Alford crew during and in-between keynote speakers, and with our customer and friend, Justin McClellan of Communication Handled, who was responsible for all of the wired and wireless intercoms, monitoring wireless audio frequencies, as well as some video tasks that I don’t fully understand.

Here is Justin at work:

Here you can see the wired communications rack where Justin controls audio communications between crew members and security. In this case a Riedel ARTIST Digital Matrix Intercom was in use. 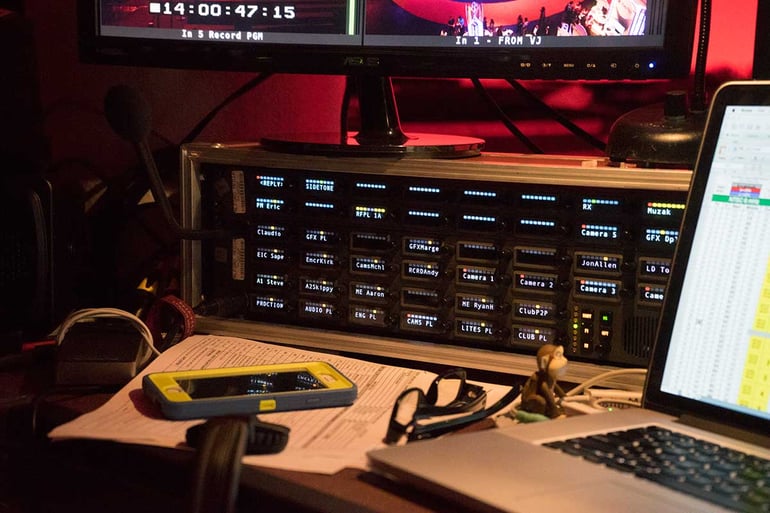 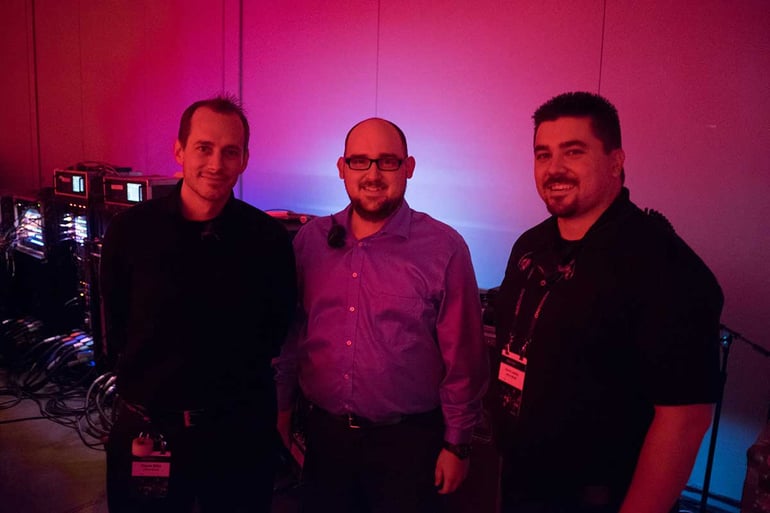 I often compare live event productions to baseball. There are long stretches of extreme boredom punctuated by intense moments of fear and scrambling when something goes wrong or the crew needs to move fast to stop something bad from happening. The stretches of non-activity are especially grueling on corporate shows which go on, literally, for days.

But don’t mistake the nonchalant demeanor of the techs during these stretches for lack of skill or attention. What they do is really, really hard, and they are always paying attention, even if it doesn’t look like it. 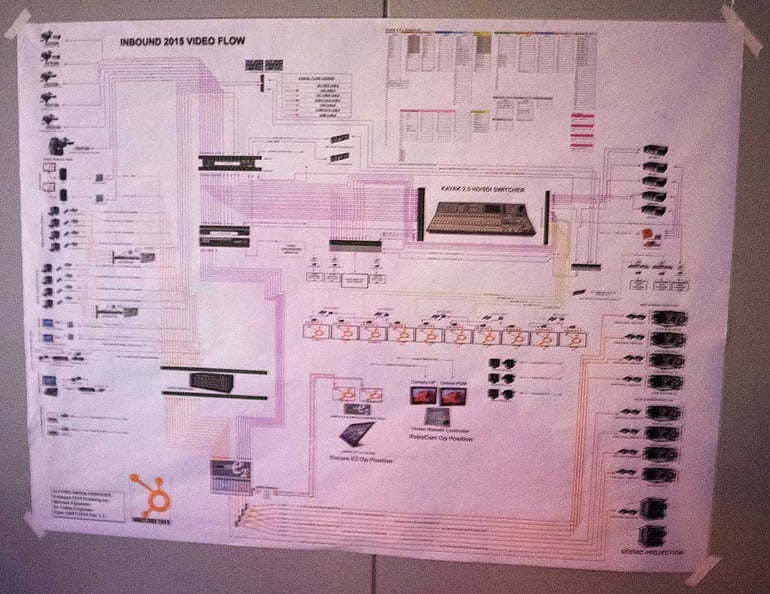 Above is an image of the "video flow" chart put together on a dime by the video department. It was dark back there, so I didn't get the best photograph, but this gives you a taste of the skill it takes to pull off an event like INBOUND.

Modern show technology skills are a mashup of old school hand-me-down knowledge, electrical engineering, IT networking, fine craftsmanship, and the herding of cats.

There are a lot of people who can do it, but very few who can do it well. Alford, Freeman, and CG are among the small number of elite companies that do it well, and that's why they get booked again and again for corporate events of this caliber.

Now, let’s get into the nitty gritty tech details of the audio equipment used at the show.

Alford was using a new technology at the proof-of-concept stage from Riedel called MEDIORNET, that allows any type of signal—audio, video, lighting controls, communications—to be converted into and passed through fiber-optic cable, simplifying signal distribution and lowering the quantity and types of cables required for a show.

That’s a lot of speaker.

There were 24 channels of Shure UHF-R (which were using our CP Beam antennas), a few in-ear monitors from Sennheiser for the opening musical act, Riedel ARTIST wired comms, and two racks of Radio Active Designs UV-1G for wireless comms.

This was a big show with a lot of very cool, expensive toys to drool over. We had a blast both at INBOUND15 and hanging out backstage with Alford Media, Communication Handled, and the other contractors and freelancers involved.

Special thanks to Allison McMahan and Alford Media Services for some of the photographs used in this article, including the leading FOH image.