War-gaming is a useful, hands-on procedure that makes coordinated frequencies as reliable as they can possibly be.

Professional frequency coordinators have used war-gaming for decades at things like the Olympics, the Super Bowl, major concerts and other big events, but, there’s no reason audio professionals everywhere can’t use it, to.

[Note: a little confusion on my part in my use of the terms "harmonic" and "intermod." Will update ASAP. The procedure itself though is performed correctly.]

Aside from a software program that can calculate intermodulation, you don't need any special equipment to war-game, so long as your receivers have good RF level meters.

We learned about war-gaming from James Stoffo, currently the CTO at Radio Active Designs, which is fitting, because he pretty much invented it. At the very least, he coined the term "RF war game," so we need to give credit where credit is due.

We also need to thank Talamas in Newton, MA, for helping us out with some of the equipment (they are the go-to for audio and video rental in the Boston and greater New England areas) as well as Babson College, which lent us the use of their beautiful space.

This video could have been longer. Much longer.

Let's take a closer look at that scan we blazed past in the beginning. 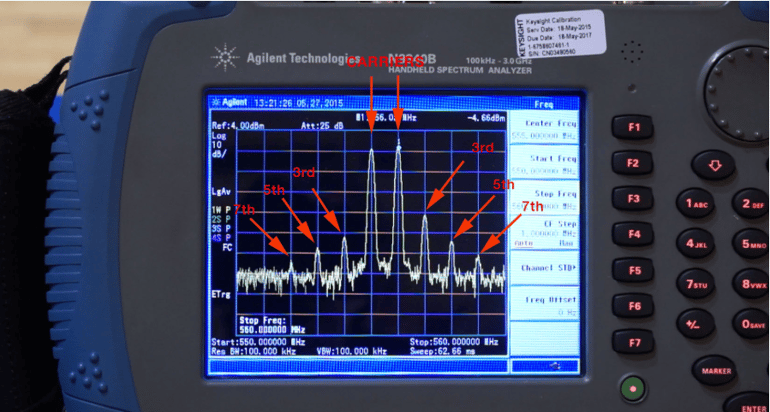 And another one at:

If you look at the scan you can see that, since our two fundamental frequencies are at 555 MHz and 556 MHz, our third order products are at 554 MHz and 557 MHz.

Third and sometimes fifth order intermods are the most troublesome because they contain the most energy. There are other products, all over the place, in fact they theoretically extend out infinitely on either side of two mixed signals, but they may be too quiet to be of practical significance, or too far away from our carriers to bother with.

Third and fifth order IMDs may be beneath the noise floor until the transmitters themselves are very close to one another, which is one reason why unscrupulous people who use lots of channels and don't coordinate can sometimes get away with a show, or many shows, without any IMD related dropouts.

Sooner or later, fate will catch up to these people.

By now you probably realize that when three or more transmitters are in use, and because intermodulation products can mix to form yet more intermods, finding frequencies that do not contain an intermod product is challenging indeed.

Software like Vantage, IAS, Clear Waves, WWB, etc, does most of the heavy lifting for us, yet all of them still make compromises in their algorithms. If they didn't, even the fastest computer would take thousands of years to compute all possible scenarios (or longer) and of course they don't take into account what the system is actually producing in the real world.

War-gaming let's you iron out the limitations of the software and test calculated frequencies in the real world.

There is another lesson to be learned here. Do not evenly space frequencies!

If you were to space your frequencies evenly, like every 1 MHz or 2 MHz, you are placing each of your center frequencies on the odd order intermodulation products of the other previous and following devices in the chain. Not good.

Intermodulation itself, what causes it, where it comes from, etc, is a big topic, and one that I'm not equipped to fully answer.

In the context of wireless audio devices, the harmful type of intermodulation usually happens when radio waves from one transmitter leak into another, and the two carrier frequencies "mix" and spit out other, spurious, radio waves at the predictable frequencies we talked about above.