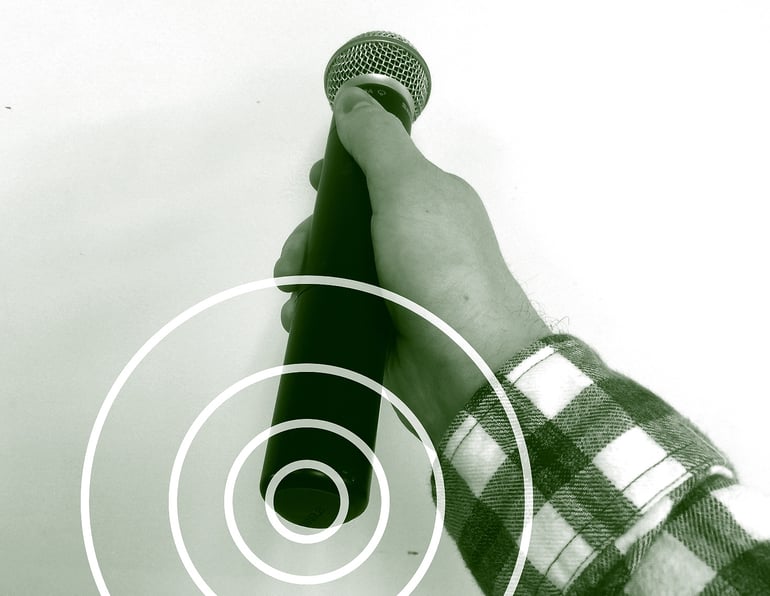 Gain staging wireless microphones is an important but overlooked step in getting wireless systems to sound their best. James Stoffo touched on gain staging briefly during his presentation with T.C. Furlong this week in Chicago, which we had the pleasure of attending. Since improper transmitter gain staging causes audio distortion and sometimes RF trouble, I think the subject is important enough to expand on here.

How to gain stage a transmitter.

Gain staging is manually setting audio gain on a wireless microphone to the correct level. This type of gain is referred to as “transmitter gain” because of where the gain is applied in the signal chain: after the mic audio input and before RF modulation occurs in the transmitter. Wireless microphone handhelds and body packs combine a microphone and a radio transmitter. We are talking about setting gain in a stage inside the microphone itself, rather than manipulating the gain of the resulting signal at a later part in the chain.

On microphone models which support it, setting transmitter gain is a simple procedure performed either with a mechanical switch or knob on the transmitter or within the software interface on the beltpack/handheld or receiver. The exact method will vary from model to model.

Once you’ve consulted your microphone’s manual on setting transmitter gain (keep a lookout for terminology confusion as described below), have the performer use the microphone with his or her normal speaking or singing volume. Monitor the audio level meter on the receiver, not the RF level on the receiver. 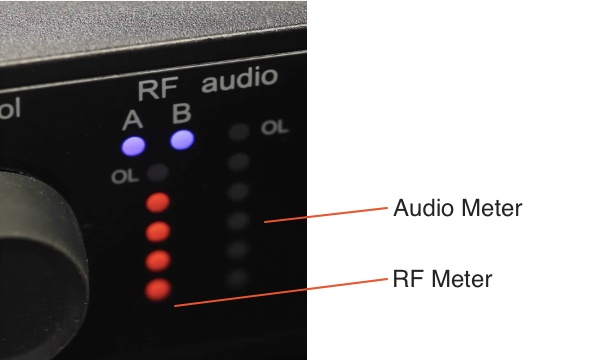 RF meter vs. audio meter on ULX-D. There are no bars on the audio meter because I am not speaking into the mic, but you can see the "OL" overload peak marking.

The audio level should jump around just underneath the peak indicator without crossing it. If the audio peaks, turn down the gain. If the levels are low (only a few bars), turn up the gain. Transmitter gain should be adjusted and returned to the performer iteratively until a “sweet spot” is reached where the audio meter reads well above its lowest display, but doesn’t peak.

Audio meters on microphones vary across makes and models. Some have a more nuanced and sensitive display, like the Shure UHF-R, whose manual suggests setting transmitter gain so peaks never exceed the yellow range. Less expensive models do not have a “yellow” or caution zone, so it is more difficult to accurately dial in transmitter gain.

If transmitter gain is set too low, like when a performer is soft-spoken, the audio’s signal-to-noise ratio (SNR) will be low, and the full dynamic range of the system will be lost. This pitfall should be familiar to mixers and sound engineers who carefully manage gain structure, but they may not always realize that in a wireless audio system gain management must begin at the transmitter. 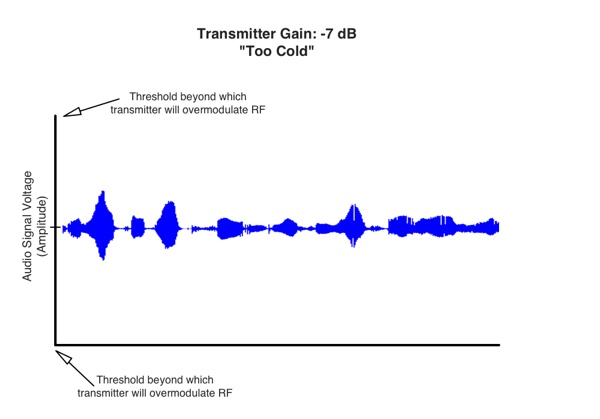 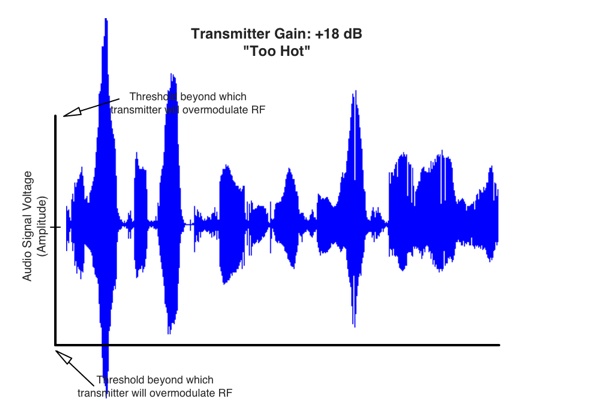 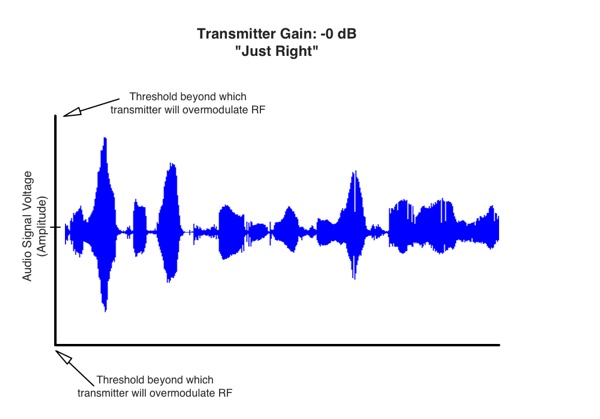 Transmitter gain set correctly for this particular performer to maximize SNR (-0 dB is arbitrary, the gain setting depends on the performer's volume).

If audio gain at the transmitter is set too high, audio clipping and distortion will occur, but not necessarily because the audio SNR ceiling is exceeded. The bigger concern is over modulation of RF. It’s a bit counterintuitive, but setting audio gain at the transmitter too high results in an RF problem, which in turn manifests as audible distortion.

With FM modulation, the amount of deviation around a center or “rest” frequency is proportional to the audio signal’s amplitude. When audio is fed into the microphone, the carrier moves up and down around the center, or “deviates,” according to the amplitude of the audio wave.

Wireless microphone receivers aren’t very good at recovering audio from FM signals that deviate above and below a center frequency by their pre-determined amount.

A block diagram of typical components included inside a wireless microphone handheld or bodypack transmitter.

"Gain” may be used colloquially and in manuals to refer to a few other parameters within a wireless microphone system. Make sure the transmitter gain you set is actually transmitter gain, instead of any of the following three settings:

Input RF attenuation, which may be inaccurately described as “input gain,” is RF padding at the front end of the receiver or distributor used to attenuate strong incoming RF signals. This setting may be within the software interface or as a mechanical dip switch, and is described as either negative dB, or number of dB of attenuation. These settings are very useful for receivers suffering from overloaded RF, but will not fix over modulation when the transmitter gain is set too high. RF attenuation settings are also easy to forget once they are enabled, or if they arrive in the “on” position from a factory or rental house. Always make sure to double check these settings are off.

Input sensitivity is available on some transmitters. This is closely related to transmitter gain, usually located before transmitter gain. It is analogous to the “trim” function on a mixer and is used to accommodate difference in input levels from different types of microphone elements.

Output gain/level or mic/line output is the adjustment of audio gain after the receiver has demodulated RF but before the XLR or ¼” output to the mixer or PA. Output gain is used to manage audio gain structure and return the output to line level or mic level ahead of mixers, speakers, processing racks, etc. The popular Sennheiser EW G3 mics refer to this as “AF out”.

Insights received via email from Steve Caldwell of Norwest, posted here in italics until we get our comment system up and running...

This only occurs with analog radio microphones of course, but it is due to the Emphasis noise reduction systems used in Analog FM transmission, and the fact that the audio meters on the receiver are INSIDE the Emphasis loop. As you may be aware, A Pre-emphasis filter is applied to the audio before transmission, and then a de-emphasis filter is applied in the receiver after demodulation. A bit similar to the old Dolby Noise Reduction techniques. Because there is the ability for over modulation to occur more easily at higher frequencies (due to the pre-emphasising of the audio before transmission), the meters on the receiver reflect the DEVIATION occurring in the FM, not the actual resultant audio after de-emphasis.

This means that most meters on an analog receiver will be more sensitive at higher frequencies (and respond more to sibilance, etc), than at lower frequencies. A meter connected to the audio output of a receiver (such as at the mixing desk), is after de-emphasis, and as such does not represent the actual FM modulation level. The meters at the receiver should ALWAYS be referenced when making gain adjustments, so as not to allow over modulation at higher frequencies. Consulting the meters on a desk is only really usefull in reference terms.

PS: I should also mention, it is my understanding that in order to get spectrum authority (FCC or whoever) compliance, the transmitters must use a mechanism to avoid over modulation of the RF signal. This is normally done in the form of a limiter in the audio stage before the audio is modulated in the PLL loop filter. So it’s actually very difficult to over modulate a transmitter, from an RF point of view. From an audio point of view hitting this limiter is not going to do you any favours.