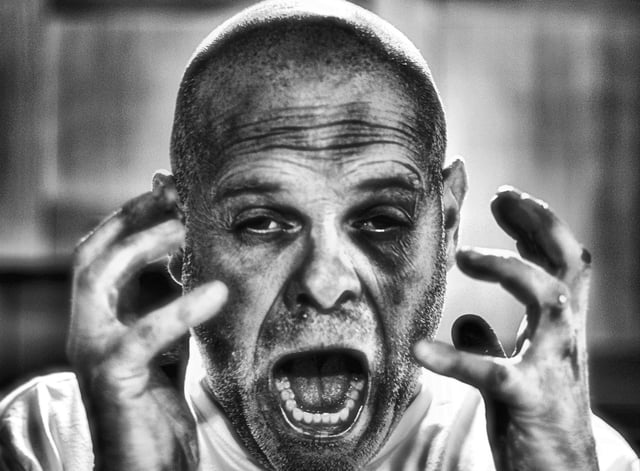 Coaxial cable has a place. If you remote an antenna less than 75 feet, low loss RG8X can’t be beat. It’s cheap, somewhat durable, and gives no more than 8 dB of loss, depending on frequency. But once you get above 100 feet, things get tricky. The longer the coax run, the more loss and the more expensive it gets. The signal arriving at the receiver from anything longer than 100 feet of RG8X is probably going to cause trouble. Runs over 200 feet without amplification are only a dim possibility.

There is no hard and fast rule for how far you can stretch RG8X with in-line amplification. However, the more amplifier stages, or the higher the gain of a single amplifier, the more noise introduced into the system. High powered amps and amps with trim controls aren’t cheap, either.

For long coax cable runs, you’re damned if you do, damned if you don’t; RG8X makes you struggle with gain structure and amplifier logistics. LMR-400 is pretty much financially out of reach to anyone but systems integration firms bidding on someone else's project.

If only… if only there was another way to send RF signal from one distant place to another through a cable of some sort. Wait a second, there is: it’s called RF over fiber optic conversion.

In an RFoF system, RF signal picked up by the antenna is converted into light and sent down cheap, readily available fiber optic cable - which loses almost no signal whatsoever - and converted back into RF on the other side.

Here’s a comparison of how many dB RG8X, LMR-400, and 1310nm singlemode fiber lose over distance. Fiber cable is the flat line at the bottom.

Up until recently, RFoF systems existed only as expensive broadcast rigs or in clunky technology adapted from IT. Even though fiber optic cable itself is cheap and capable of sending signal many kilometers without loss, the devices needed to accomplish the simple RFoF conversion were mind-bogglingly expensive - a distributed RFoF installation might land near six or seven figures.

The discrepancy between the ubiquity and economy of fiber optic cable and the seemingly alien and  expensive technology used in traditional RFoF is why we designed the RF Optix system. It allows anyone with a wireless microphone to distribute RF over fiber as long as they want, with negligible financial and skill barriers to entry.

A basic single channel kit is approximately $1K for receiver, transmitter, and 100 meters of indoor rated singlemode 1310nm cable (that number varies considerably, depending on options, by the way). So, if you’re doing a project with a run of less than 100 feet, purchasing an RF Optix doesn't make too much sense.

But for cable runs above 150 feet, the benefits of RFoF are undeniable. There is some amount of insertion loss with our system, between 2-3 dB, but beyond that 1310 loses only 0.003 dB per 25’. Physically, the weight and bend radius of fiber cable is a huge improvement over even the most supple coax. With those numbers, there are very few reasons to use coaxial cable, unless you find in-line amplifiers exciting, or have a fetish for copper and other semi-precious metals.

The following chart compares the total cost of remoting a single or diversity pair of antennas on RG8X, LMR-400, and an RF Optix system (with indoor rated FC-APC 1310 nm fiber optic cable.) 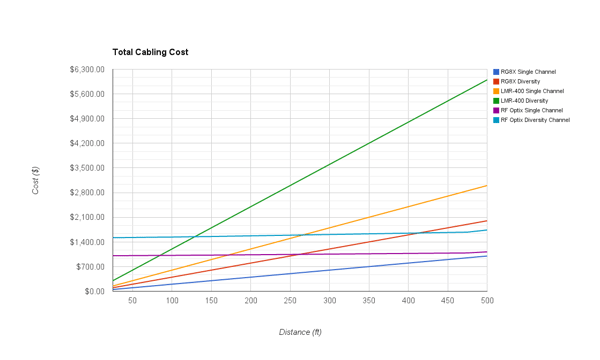 As you can see, there is a very clear break-even point where the cost of using RG8X and LMR-400 for remote antennas exceeds the total cost of a single or diversity channel RF Optix system with cable. That’s not factoring in the more subjective costs of signal loss.

Could you remote an antenna 500’ on LMR-400 with a high-quality in-line amp without problems? Sure. But it will cost 300% more than sending RF over fiber with an RF Optix. If you're still using coax for >200' runs, you are either a broadcast engineer, or look exactly like this guy: 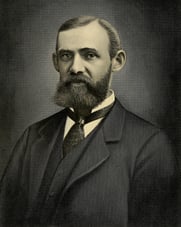 The first is that fiber optic cable connection surfaces must be kept meticulously, scrupulously clean. The cable compatible with our system will experience complete failure if a particle of around 10 microns clogs the entrance pupil. That is much smaller than can be seen with the naked eye. Microfiber and even so called “lintless” cleaning cloths actually increase the probability of signal loss, since you’re essentially wiping a towel covered in flaking cellulose particles all over the connectors. The solution is simple, just use an inexpensive fiber optic cleaning tool every single time you make or break the connection. We sell one with most RF Optix kits.

The second is that fiber optic cable and connectors have considerable variation in construction technique. If you use the wrong type of connector, like one that is terminated at the wrong angle, insertion loss will increase. If the connectors are loose or malfunctioning, you will also see more insertion loss. In short, the interface between the two connections needs to be as close to molecular as possible - it needs to fit really, really tight.