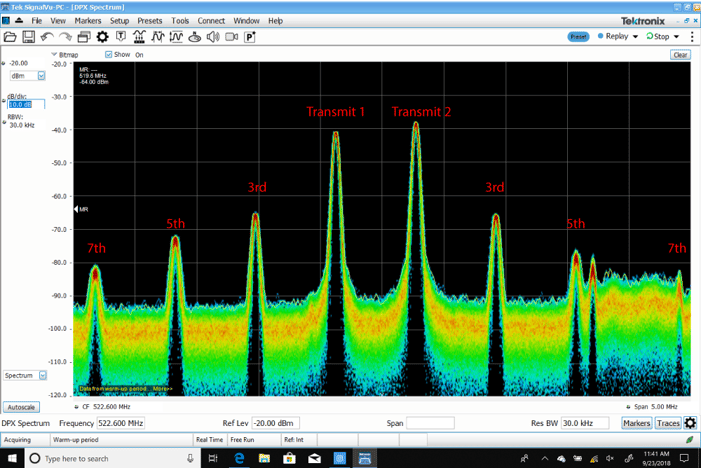 In an earlier blog post we presented a basic strategy for designing a system using wireless mics and IEMs together at the same time in the same space. We received a number of questions about it and decided to do a follow up post with more detail and explore some more advanced techniques. The most frequent question we received was about the guard band between groups:  What's the right amount of spacing between my mics and IEMs?

You want to avoid setting your frequencies so you end up with mic-ear-mic-ear-mic. The better practice is to end up mic-mic-mic ... space ... ear-ear. But certainly ear-ear ... space ... mic-mic-mic is the same practice. So the examples we’ll use in this post will put the IEMs in the lower end of the spectrum and the wireless mics in the upper end. The goal is to corral your intermod products so as to make them more manageable. Generally third order intermod products (IM3) are the most problematic followed by 5th and then 7th.

So once we group our mics and ears we can see in the images below that the spread of the potential intermod is directly related to the tightness of our groupings. It should be pointed out that all the other real world potential interference such as TV stations and third party transmitters, noise etc have been filtered out. You should also note that the intermod products represented are “calculated”. The real world intermod mainly depends on the power of your transmitters and the proximity of one transmitter to another. So it is likely you won’t encounter all of them simultaneously like this, but rather they will likely pop in and out throughout a performance.

In the screenshot above we see a relatively tight grouping of 8 IEMs on the left (red) and 16 wireless mics (green) in the upper band on the right. The light blue traces at the bottom show the calculated intermod for each grouping. And what we are seeing is that the intermod products for each grouping do not cross over into the other grouping. This would be a relatively ideal situation as there is plenty of empty spectrum in between the two groups.

The above screenshot shows a similar result. The grouping has become a bit wider and so the intermod products spread out a bit more.

And as the assignments of the mic group and the IEM group widen even more you can see that the intermod also widens and begins to encroach upon the other group and occupy the entire spectrum. But that doesn’t mean it won’t work! There’s no inherent problem in dropping intermod products on top of each other, but it becomes much more difficult to find open slots to assign frequencies and backups.  And since we've conveniently left out TV stations, video walls, and other interference, intermod issues can quickly grow in the real world, outside the comfort of your frequency coordination software.

“If we were to effectively “squash” all of the results for an equipment type (say IEMs) into as small a space as possible, rather than spreading the results over the entire range, then what we are doing is reducing the spread of the 3rd order product from that IEM by a factor of 3.  If we were to allow the calculator to spread a bunch of IEM over the equipment's entire bandwidth of say 80 MHz, then our 3rd order products alone engulf 240 MHz. If we condense those same IEM frequencies into 15 MHz, then our 3rd order spread is only 45 MHz; 15 MHz on the bottom side, 15 MHz on the top side, and 15 MHz inside the band.”

So to summarize, your best bet is to pack together your mics as a group and your ears as a group into as tight a grouping as possible. You should be aware that some frequency calculators will use up all the space available to them. That basically means they will assign things across the entire available block and only avoid TV stations. Better calculators will look at all your requirements at the same time until it fulfills all your requirements or it runs out of available space. This is certainly easier to do with 8 mics and 8 ears than 24 or 100 of each. And if you can arrange it, you can certainly drop a tv station or two inside the guard band.

And for more info on intermod and optimizing your wireless system, be sure to checkout our free guide, and leave us a comment below with your tips and tricks for spacing mics and IEMs.