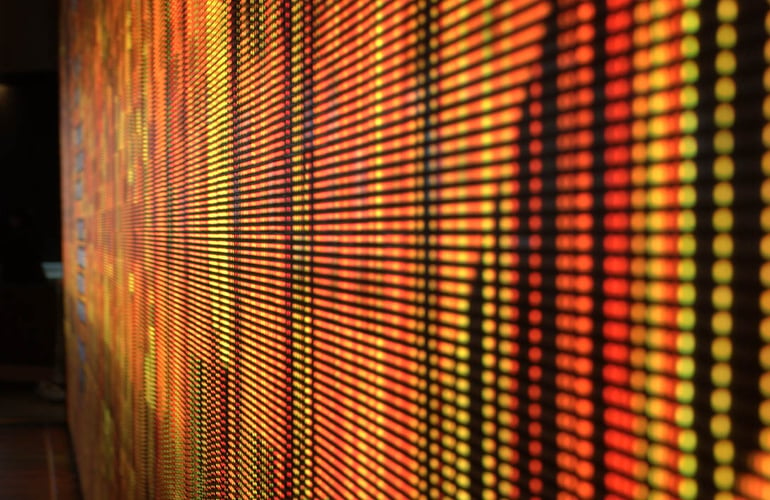 But there is no denying the problem exists.

This article is about what display wall interference looks and sounds like, and what causes it. Our next article will provide detailed instructions on how to configure wireless audio systems to minimize the problem, so stay tuned.

Because video display walls are almost always on, around, behind, or (why not?) in front of performers and crew members using microphones, wireless monitors, and comms, this is a very tricky problem to solve since the source of interference is so proximate to the receivers or receive antennas in use. As we have said before there is almost no intentional or unintentional interference related problem that can’t be solved with creative use of the inverse square law. But because video walls are right next to performers, it’s difficult to get the beltpacks or antennas far enough away from the walls.

We’re not talking about a single LED display panel that you get at Best Buy, or even the expensive kind you might spec into an install. Here, we’re talking about walls. Giant video walls that have been torn down and built up from modular or independent components, or walls made from 10s or 100s of individual panels, like this:

What does display wall interference look and sound like?

(But, there are exceptions, which we explore below.)

Here's a simplified illustration of what you might find in a well-attenuated facility without any wall interference. 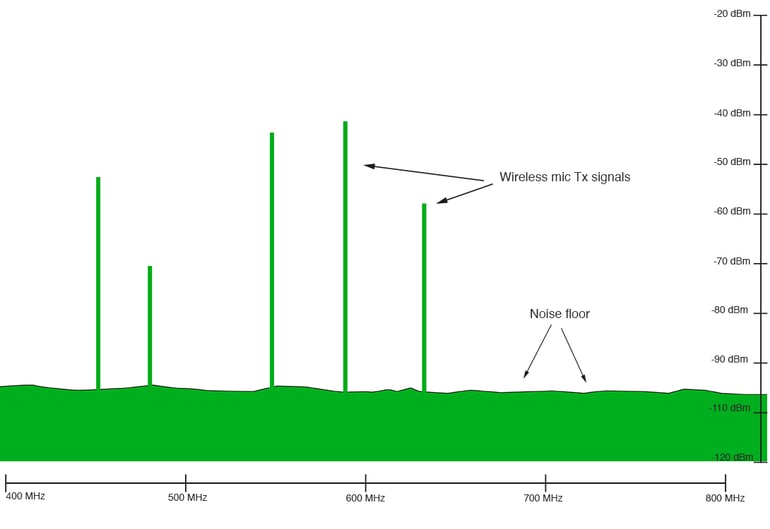 Typically, when a video display is on, you’ll see something like this: 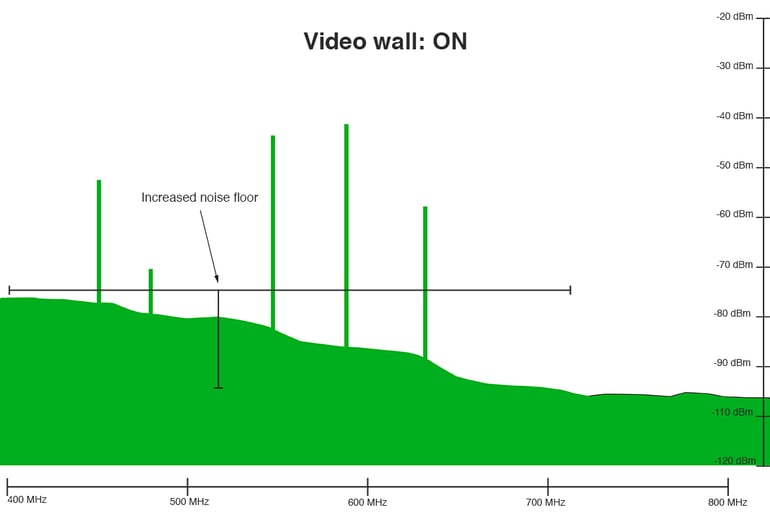 To make matters worse, this interference is often present even if there is no image on the screen, and can vary wildly in its characteristics depending on the type of video signal being fed to the displays, and even the colors and movements of the images moving across the screen.

"What video wall interference generally does is raise the noise floor of the wireless," says James Stoffo, Chief Operating Officer at Radio Active Designs. "Which gives you a poorer signal-to-noise ratio, which is going to reduce your range, and it’s also going to add audio noise to your system."

James works on the high end of the production world. The interference he sees is coming from top quality displays, and display components, which usually produce this signature of a broadband, low-level "blanket" of spurious RF over the noise floor, and nothing else.

However, we have seen and heard considerable evidence from other professionals that poor quality, cheap display walls, especially LED walls, are capable of producing much more sinister narrowband RF "spurs," which Ryan Sartell of Communication Handled described to us as LED "garbage."

Here's an illustration of what these spurs look like in some cases that we've seen: 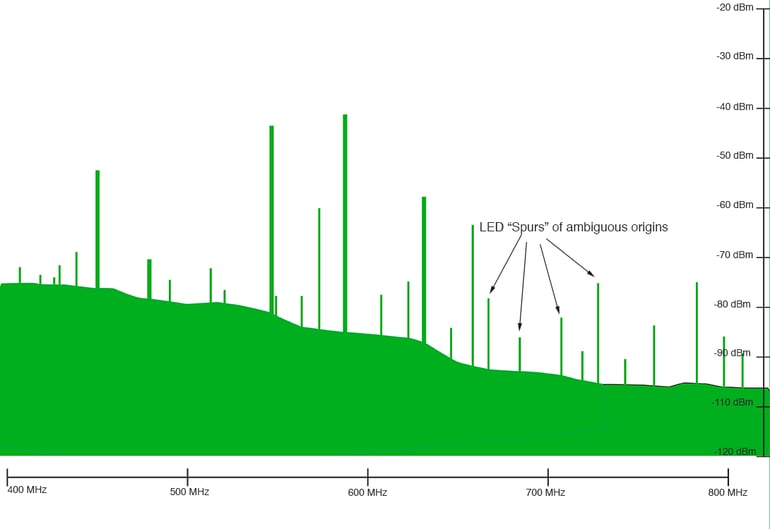 These spurs can be very loud. Their amplitude may approach or exceed that of actual transmitters!—so they need to be addressed as if they were transmitters, carefully tuning around them and including them in IMD calculations.

They can also be quite wide. Pete Erskine of Best Audio sent us this scan he took at an event in Montpellier, France, which he reports, "almost destroyed my show." 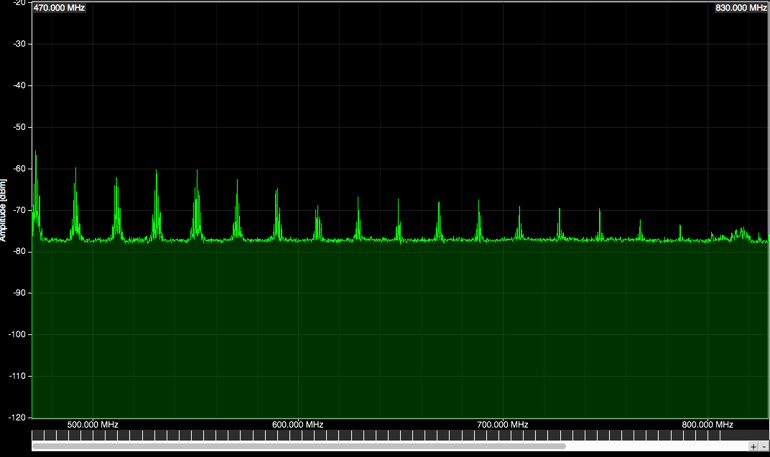 This is the third image we have seen showing these spurs. At Pete's show, there were 5 MHz wide spurs every 20 MHz. Other scans show spurs with different widths and spacings, but they are definitely real.

What causes these spurs? We don't know, exactly. Tim Vear at Shure has speculated LED drivers are the source of the spurs. Pete thinks they could possibly be from badly filtered switching power supplies with non-shielded connectors (more on these in the next section BTW).

If you think you know the answer to the spur mystery, please tell us more in the comments below.

Display wall interference also has a characteristic sound if the RF demodulates and makes it into the audio. Some have told us the worst audible artifacts sound like "digital jittering" (though we don't have any recordings to give you unfortunately). Other describe it as being like the sound of light sabers.

"Since this interference is broadband, you can’t filter it out, or you’ll filter out your mic," so you're stuck with both compromised reception and constant audible artifacts.

All told, video walls can be just about the worst thing that can happen to an audio department.

This was not an especially easy question to answer. Although everyone who works in production audio has encountered display wall RFI, very few seem to know why it occurs. And the people who do know have slightly differing opinions.

It should be said blame for RFI is not always easily pinpointed to one person, device, or company, but is the product of an accumulation of causes that begins when a panel is being designed, continues through how they are manufactured, and ultimately ends in how they are configured and installed at the venue by the crew.

Likewise, a video wall used in production, as compared with one single panel, is a system of interlocking parts that all use electricity which all have the potential to create interference, so it's not easy to simply point to one individual electronic component and say, "yep, there's your problem."

Let's begin with a summary of possible causes, and then move on to in-depth analysis with expert testimony.

There is wide, wide variability in the quality of display panels available for sale. Generally, it seems that price is correlated with the care of electronics design; poor shielding and grounding and sloppy PCB design leads to RFI, plain and simple.

"A lot of LED products that might come out of China use the minimum minimum minimum number of PCB layers possible, just to make it inexpensive," says Jeremy Hochman, who currently leads creative LED product development at VER. "They're using the minimum you need to make it operational, and that's it. You then have very high-speed signals in the megahertz range going through the board that are all just on the surface of the PCB, or coming out through cables, going who knows where, and making weird patterns, that contribute to interference."

Jeremy, who like James Stoffo works with and designs some of the best panels available, claims that from his frame of reference, things from manufacturers are getting better.

"I would say 90% of the products I see these days are LED, and things there are actually getting very good. LED drivers are doing a lot more of the smarts close to the LED, so the signals running on the PCBs are not so high-speed. That reduces EMI. The enclosure technology is getting better. Better groundplanes are being put on the LED boards."

While the design of individual display products, especially cheap ones, do cause some of the problem, that's not the entire story. The user also has something to do with it.

"There's no way to know how an end user that might be decoupled two or three times from the manufacturer is going to end up putting this thing together," continues Jeremy. "I don't think this interference is particularly caused by the LED panels themselves. It's the sheer volume of them. If you take 1000 toasters and put them in an array, they're probably going to radiate in an unexpected way. If I set up 1000 projectors in a modular array, it's probably going to interfere with you. Many older products weren't intended to be set up on such a large scale, so if I set up an LCD wall that's 300 feet wide, it's going to radiate and interfere." 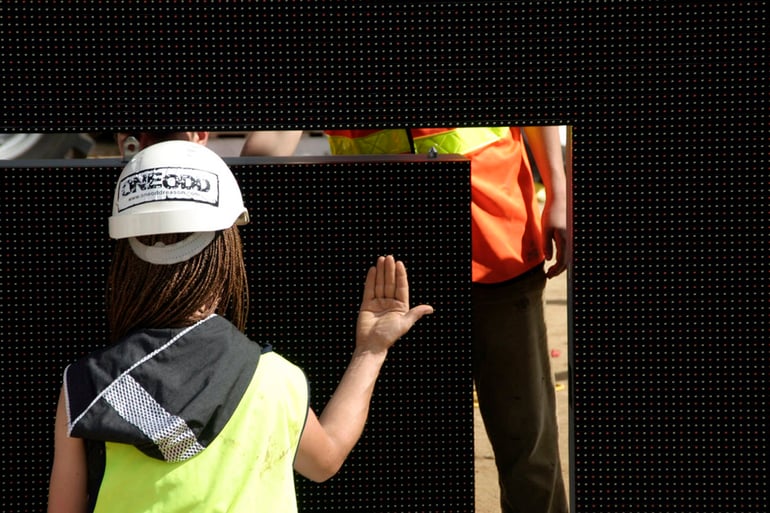 Video departments are doing some very severe teardown and rebuilds of video components to get their displays just they way they want them. They may be replacing or adding power supplies, gutting and re-wiring diodes or panels, or even swapping out or re-programming drivers—and they aren't checking to make sure their Frankenstein creations, however gorgeous the image, are conforming to FCC certifications for acceptable levels of spurious RF emissions.

James Stoffo has been singing this sad, sad song for a long time.

"When I originally started going up against video directors," he remembers, "the first thing they would say is, 'well, the equipment is FCC type accepted.' They would point out the FCC acceptance label on the back of the unit."

Since LED display walls used in production contexts are so much different than consumer LED or LCD display products used in the home, and since production caliber displays, even the best ones that are put together by expert video departments, are still causing devastating interference to the audio department, perhaps it's time the FCC takes another look at how it categorizes and approves EMI on these types of products.

"The tolerance on the FCC type acceptance on this equipment needs to be tightened up," James Stoffo asserts, "because even though it is type accepted, it is still creating harmful interference onto wireless mics, ears, and intercoms."

Now might be the time to start getting tough on the problem of video wall RFI—before it gets any worse.