The 40 wireless channels of the show, which celebrates the region’s western legacy, have come to rely on RF Venue products, including a Diversity Fin® Antenna, a COMBINE4 IEM transmitter combiner, a 4 ZONE™ multizone antenna combiner, the DISTRO9 HDR™ antenna distribution system and, most recently, an RF Venue inline Band-Pass Filter

Every year since 1965, the Burning Hills Amphitheatre in Medora, North Dakota, has hosted summer-long runs of the Medora Musical, a live revue looking back at the region’s “Wild West” era and dedicated to Theodore Roosevelt and his western experiences in the Badlands. Each performance features a band housed in a moving-track gazebo and a 12-member chorus backing the actors, all on a 100-foot-wide stage at the far end of a natural venue. What keeps the show audio clear and dropout-free for the audience and performers alike is a growing array of wireless antenna and wireless management solutions from RF Venue, including a Diversity Fin Antenna, COMBINE4 and 4 ZONE combiners, a DISTRO9 HDR wireless microphone distribution system, and most recently an RF Venue Band-Pass Filter.

As a series of FCC spectrum auctions this century reduced the useful frequencies available to the show, Mark Brodin, audio systems and installation technician for the Theodore Roosevelt Medora Foundation (which owns the Burning Hills Amphitheatre), has changed out antennas to accommodate the altered spectral landscape. Brodin first worked the show in 1991 as audio engineer/mixer, a role he reprised in 2005. He’s been with the show since, transitioning to sound designer in 2006 and to his current role in 2014. “We’ve been consolidating usable frequencies over time while building on the same cabling infrastructure,” he says, recalling a time before wireless when actors would pick up a wired microphone at the edge of the stage, sing their song, then lay it back down and jump into their dance number. “We’ve gone from a couple of wireless channels to 40 in that time. The current show uses 30 for vocals with four backups and six for in-ear monitors using Shure PSM1000 systems.” 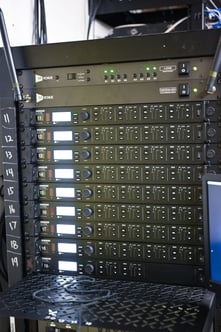 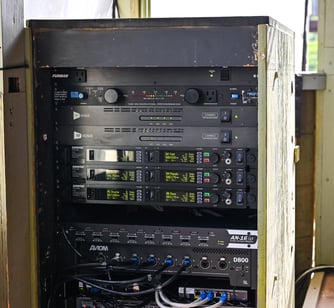 Since they added wireless audio, RF Venue has helped them maximize it. “We began with two Diversity Fin antennas, one on either side of the stage; although that left us with what we interpreted as a few multipath problems,” Brodin says. “But I realized that we could cover then entire stage with just a single D-Fin antenna, which is located on the stage-right Tower Building. Who knew there was a product that worked so well that we could use fewer of them?” A pair of COMBINE4 active IEM transmitter combiners are fed from the PSM1000 wireless transmitters co-located in a rack on the gazebo with the six-member band. “When band members come downstage for a solo, the COMBINE4s make sure they are always able to hear themselves without dropouts,” he says.

More recently, the show has added an RF Venue Band-Pass Filter, placed in between its 4 ZONE combiner and DISTRO9 HDR distribution system alongside wireless microphone receivers. The filter, says Brodin, helps tremendously by suppressing the spurious RF emitted by the growing number of LEDs on stage, mainly now in the lighting system but which could also become more of an issue if a proposed video wall is added to the production. “Plus, with 1,000-plus people in the seats every night, there’s also a ton of RF from everyone’s mobile devices,” he says. “They rewrite the show every year, so there are always some new aspects that affect wireless audio,” says Brodin. “Fortunately, RF Venue seems to have a solution for everything that comes our way.”