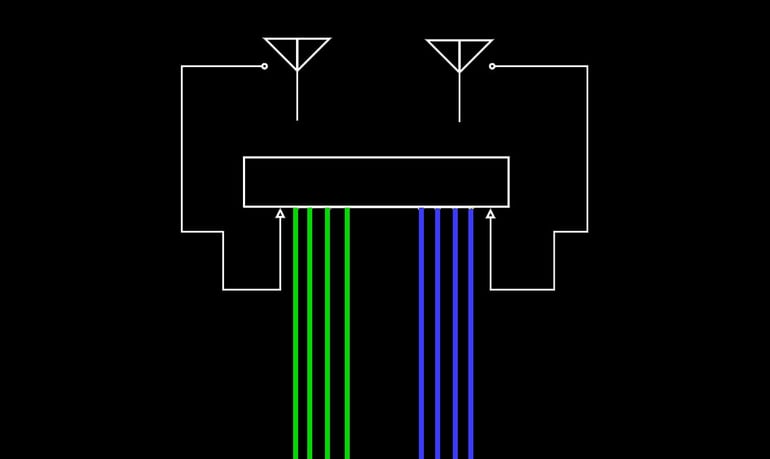 Never heard of antenna distribution for wireless audio? Or heard about it, but don't really know what it is?

Through countless conversations with our customers, I've discovered that many troublesome "interference" cases boil down to users operating multiple channels without any antenna distribution, or existing distribution that is improperly deployed.

With a surprisingly large number of these conversations, adding proper distribution completely eliminates dropouts and interference.

What is Antenna Distribution?

Antenna distribution refers to numerous methods of distributing RF signals through one or many antennas.

For those unconcerned with lengthy definitions, antenna distribution is about two things:

(Terminology around combiners vs distributors is confusing. Clear it up here)

Antenna distribution, when you get up to the big leagues, is also about engineering distributed antenna systems (DAS), also known as multi-zone distribution. A multi-zone system allows talent to wander through coverage “zones” or rooms without losing reception.

For the average professional, multi-zone's aren't usually necessary, though we sometimes get asked how to set up a simple, two-zone DAS. The answer is here.

Then Plug N' Play, as follows: 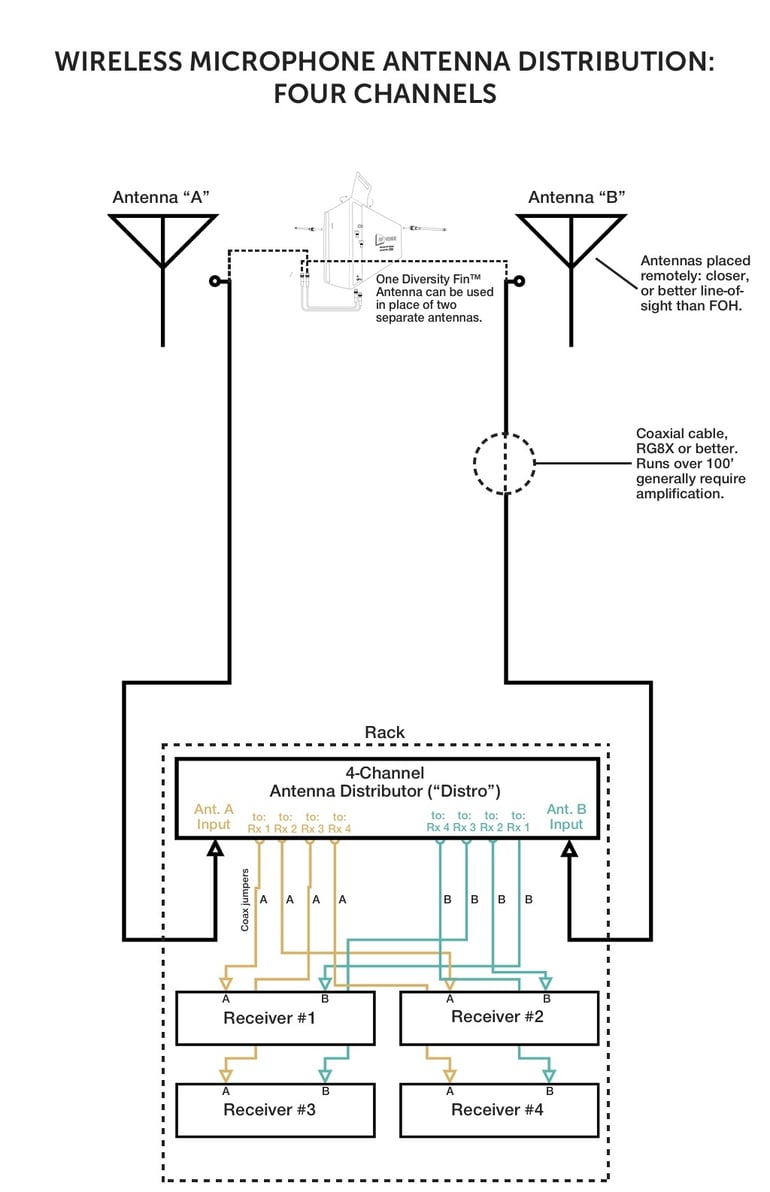 More than four channels? No problem. If your antenna distributor has a cascade port, you can cascade up to 16 receivers together using four distros. For distros without dedicated cascade ports, you can also cascade via the "daisy-chain" method by sacrificing one of the four A and B antenna outputs to use as a cascade port--which means if you want to distribute 8 receivers, you'll need three distros instead of two.

Here's a diagram for an 8 receiver setup. 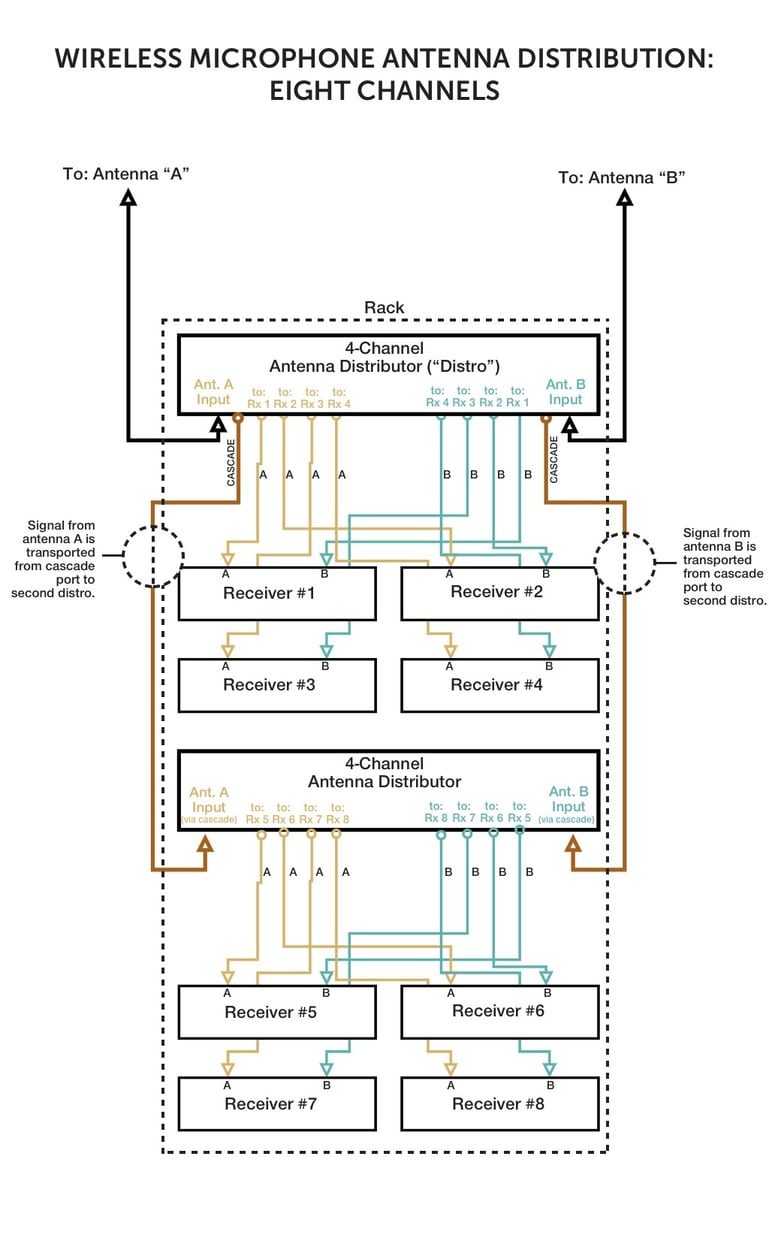 Some professionals like to position each successive distro beneath the previous receivers in the previous cascade, and above the receivers that distro will distribute to, as shown above. Others like to keep all of the antenna distributors at the top, with 8, 12, 16 or however many receivers are in the system below the bank of distros. This is often a matter of personal preference.

Antenna Distribution for IEMs, and IFBs

Antenna distribution is also used for devices that transmit, rather than receive. Like in-ear monitors and IFBs.

Antenna distribution is especially important for transmit devices mounted in a rack, because using co-mingled whip/dipole antennas at the rack risks causing severe interference between the transmitters, because the antennas are so close to one-another.

Benefits of antenna distribution for IEM transmitters include: 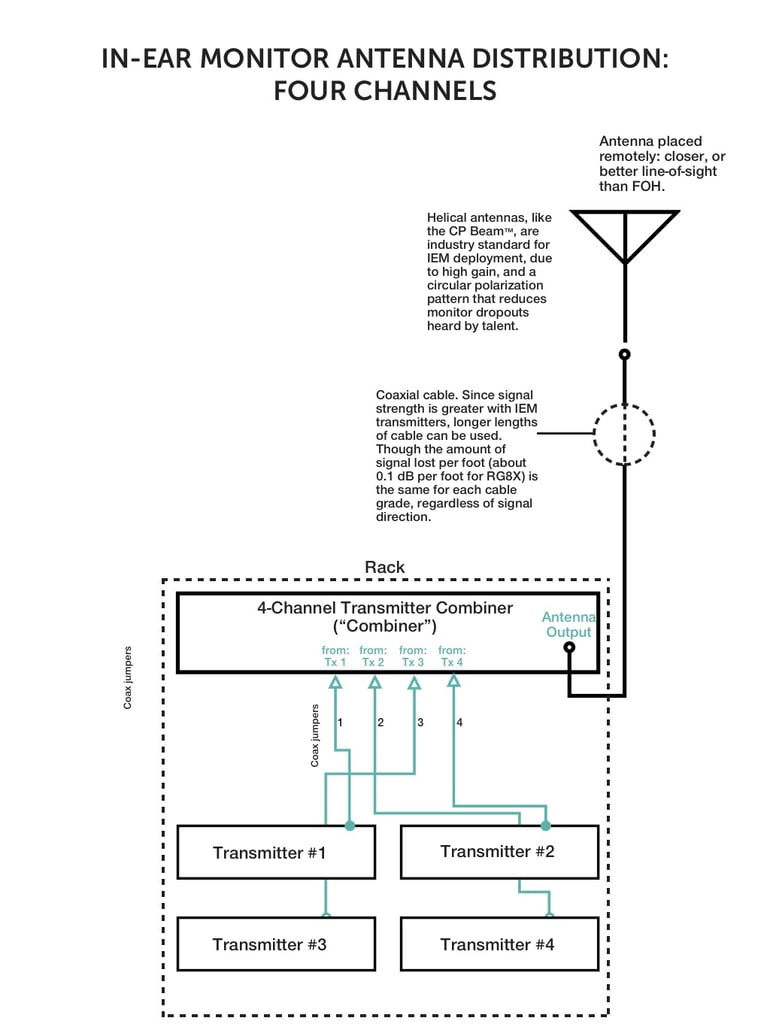 IEM transmitter combiners can be used together for more than four channels, but they cannot be daisy chained. Follow the instructions at this link to learn how to create an eight channel combiner out of two four channels without setting something on fire.

NOTE: There is something missing from these diagrams--power cables. We deliberately omitted PSU/power cabling to make the signal distribution easier to understand. However, your IEM or wireless mic rack unit has a power plug and cord, and that cord is located in the same area as the coaxial cable jumpers. If you have a distributor or combiner with an integrated PSU that supplies power to the rack units, like the DISTRO4 and COMBINE4, all you need to do is connect DC jumpers between the power inputs on the receivers or transmitters and plug the jumper into the DC jacks on the distribution unit. Otherwise, you'll just plug the receivers into a power-strip using wall-warts.