Go backstage on any major show or event, and you’re bound to see something strange: row upon row of baking pans, each filled with one or more wireless audio belt-pack or handheld transmitters.

This phenomenon is often limited to big shows, because the baking pan technique came from the big leagues—from the man many call the father of professional frequency coordination of low power devices for entertainment production, James Stoffo.

But by James’ own advice, which he generously shares with the pro audio community through hands-on workshops, correspondence, and interviews like this one, there is no reason why you shouldn't be harnessing the power of the trays, too.

“Out of all the tools that I bring on a show, those tin trays make the biggest difference,” James tells me, to my surprise.

I can't help but laugh, because of all the gear he uses on a show, disposable tinfoil trays have to be among the least expensive by a mile. Yet for him, and countless other professional coordinators and techs, they are a must-have, not a nice-to-have.

“If I get on the show and I don’t have those tin trays,” he continues, “My next move is to go to lighting and ask for black wrap so I can make slots for the transmitters. If there’s no black wrap, then I go to catering and get tin foil and make them out of tin foil. But I am going to have those trays one way or another.”

Although academic historians aren’t exactly keeping tabs on the history of wireless audio coordination tools, there is solid agreement that James was the first to pioneer the use of metallic shields with one or more open faces to tame the RF energy of transmitters located in close proximity to one another—like they invariably are backstage during a show.

After a thorough education in electronics and RF systems during his time with the US Navy Submarine Service, James worked in professional audio with early versions of commercial wireless microphones, and discovered that multiple transmitters kept next to one another backstage, powered up, waiting for cues, created detrimental intermodulation productions which destroyed hours of careful coordination work, and the ability to accurately monitor RF and audio levels and demodulated audio at the rack.

“The A1s, they wanted me to keep the wireless on all time,” he remembers, “so they could PFL them, to make sure they work—this was before people trusted me. And so I said, ‘Okay, well if I have to keep these transmitters on, there are going to be intermods all over the place.’ I had to come up with something quick, and that’s when I built that first box with my dad. It just evolved from there until, now, everyone is using them. At least guys and girls in the know.”

Ingeniously, James conceived of using a metal container as an open-faced Faraday cage to isolate energy between adjacent transmitters on a table.

Humbly, James maintains that “Michael Faraday invented the idea. I just kind of borrowed and applied it to the profession of audio.”

The first transmitter tray was a large multi-binned receptacle James built with the help of his father. He claims it “weighed as much as an ottoman.”

“It was just too heavy, so I said, ‘lets just go out and get tin trays, 12 for three bucks at Kmart.’ And I started using those. They didn’t look that cool, but they worked great, and I started carrying them around to shows with PWS, and then later with ATK.” 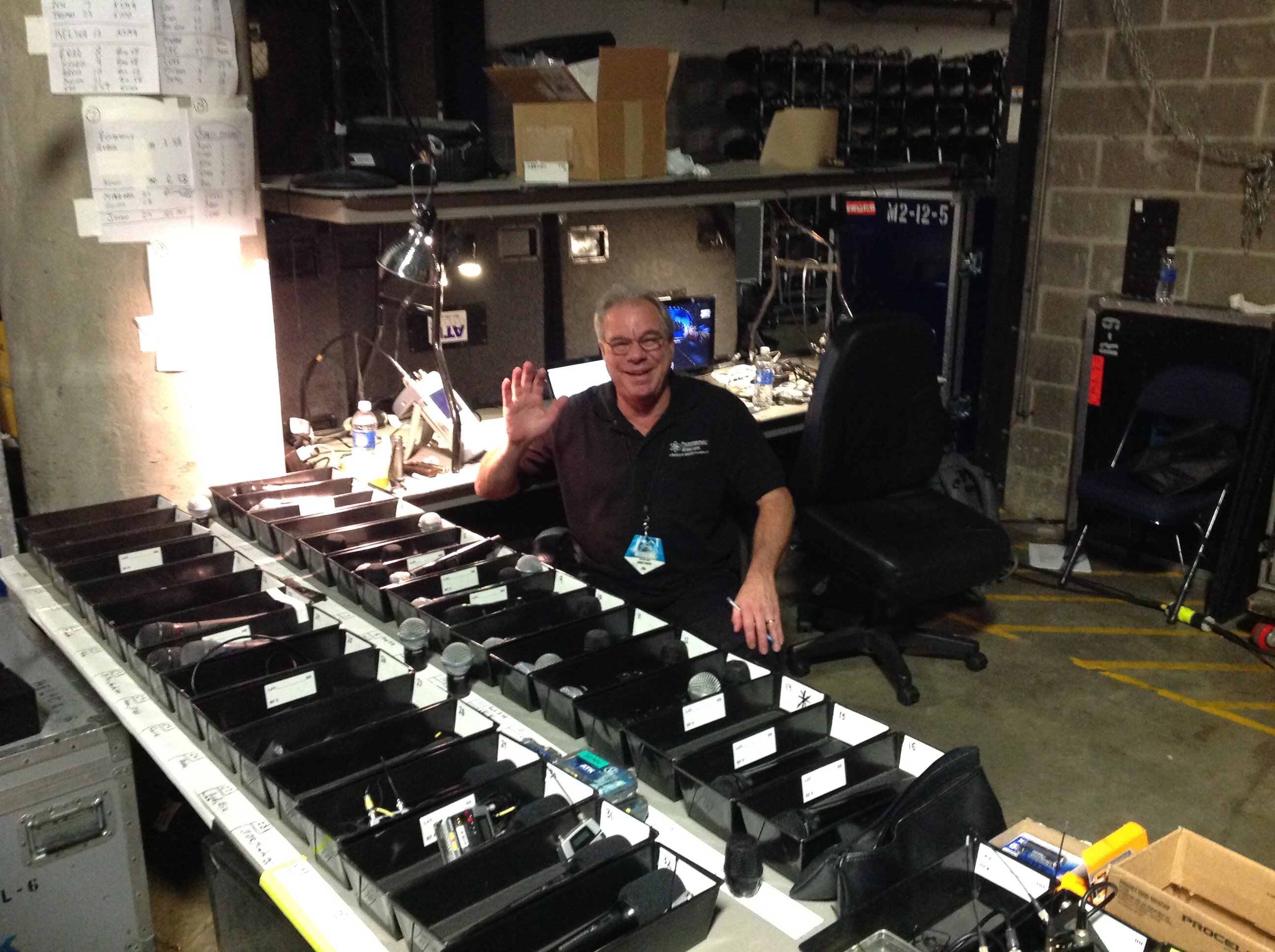 Trays work because metal of any kind, in any shape, acts as an antenna that can conduct and radiate RF energy, to some degree. By keeping active transmitters inside a four or five sided metal container (counting the bottom), most RF is reradiated by the tray, not the transmitter’s carefully tuned antenna, and reradiated so inefficiently that in practice nearly all noise and intermodulation products are eliminated, even though the devices are only inches apart.

“If you have active transmitters on a table,” James explains, “there are intermods and noise all over the place. But in trays, they are nice and clean and they’re only putting out their own transfer signal. You have to be able to see a signal because if you don’t, then the A1 can’t hear any audio. So, the idea was to only cover up three sides of the transmitter, and leave the top open to let out the signal.”

“What’s actually happening when you put a transmitter in a metal tray, is not only are you shielding the transmitter but you’re creating a whole bunch of multi-path wavefronts inside of that tray that cancel one-another out, and the only thing that comes out of the tray is maybe 1/10th of the RF signal.”

James provided us with a visualization of just how beneficial trays are. This is a spectrum trace overlay from a spectrum analyzer. The lighter grey line on top visualizes a bunch of transmitters on a table, without trays. The darker line below it shows the clean, tight signals of transmitters placed inside trays.

And the benefits of trays aren’t only electrical. They’re practical, too.

“Trays serve double duty because say, on a music awards show, I might have 28 wireless mic transmitters/handhelds, but I’ll have various capsules that need to be changed. So I might have a Shure transmitter in there, and they’ll be an SM-58, an 87, and KSM9, all inside that tray, and that helps me organize what head I have to put on which transmitter as the show progresses. So it also serves as a place to throw all RF related audio equipment: your heads, your elements, your body packs, you may have a headset in there, you might have a lot in there.”

The only downside to adopting a tray system is that since the tray effectively becomes the antenna to the transmitter, and that antenna, for lack of a better word, sucks (is extremely inefficient), the current drawn from the transmitter is increased, and devices left in trays will bleed battery about 10% faster than when sufficiently isolated or insulated from metal surfaces. James finds transmitters in trays get about one hour less battery life.

Battery life is of concern to many, but with all the advantages the tray system confers, that one disadvantage doesn’t tip the scale against it. Buy a crate or two of bulk AAs, then head on over to Kmart, buy yourself some aluminum trays for $12, and start running shows like the best in the business.

James’ trays are so important to him that he’s had the various companies he’s worked for over the years construct him custom, sleek matte-black trays, which he calls his “Gucci" trays.

Once again James, thanks for the tip.