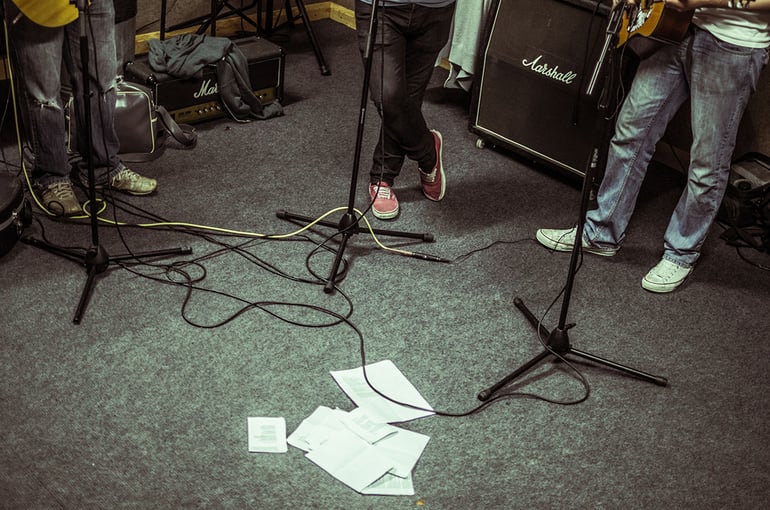 Too often, we receive worried calls from techs or FOH engineers that go a little something like this: “We set up and coordinated our wireless during rehearsals on Tuesday, but on Sunday we had the worst dropouts! What’s going on?”

Usually, new variables absent during rehearsal have changed the shape and behavior of the radio environment, causing equipment to fail, even if settings are unchanged.

There is no practical way to replicate the RF environment of a full auditorium during an empty rehearsal.

There is, however, ample evidence for what can be expected to go wrong, so you can take steps to avoid it.

When 500 people and their cellphones pack into a building, security and staff power on two-way radios, and stage lights and LED walls turns on, the noise floor of the UHF band typically goes up, even if there aren’t any new wireless audio devices using UHF added to the mix.

Although an increased noise floor may not create dropouts on its own, it raises a mic or IEM’s general susceptibility to other sources of interference.

Technical Director Daniel Scotti and the team at Saddleback Church worked with us to illustrate just how much RF conditions can change between an empty room and a full one.

Here’s a frequency scan using an RF Explorer RackPRO and Clear Waves of Saddleback’s main sanctuary on a Saturday before services, with everything powered down. 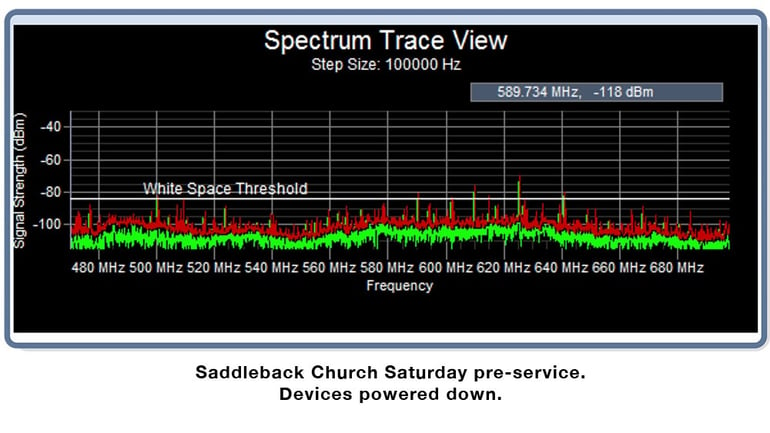 And here it is on a Sunday, first during a pre-service run through with mics and IEMs powered on, and then during the actual service.

We scanned the entire UHF broadcast band, 470-698 MHz, so visually these results don't look as dramatic as they might were we examining only a few MHz, but a significant difference is there. The noise floor rises once devices are powered on, and rises in some places again when the audience is present and service underway.

If frequency coordination was sloppy during rehearsal, its faults can rear up during the actual performance when there is less headroom between the signal of interest and noise.

Frequency coordination during rehearsals should follow best practices and use software programs like Clear Waves or PWS’ IAS to calculate intermodulation products to make frequencies as reliable as possible, rather than “good enough.” Techs should assume RF conditions on the day of the performance will be much worse than they are with an empty building.

Performances in urban areas should also consider the possibility that neighboring groups may also be using wireless audio equipment at the same time. Although wireless microphones are low power, they can still cause interference over short distances or between adjacent buildings.

Is there a concert scheduled for Saturday night at the club across the street? Is there another church also holding services on Sunday at 11:00 AM next door?

If so, consider reaching out to them to exchange frequency lists to ensure you won’t step on one another’s toes.

Wireless audio devices need an unobstructed path between the handheld or beltpack and the antenna back at the rack or remote antenna location. Radio waves are absorbed by human bodies. A human body in-between receive and transmit antennas is not good.

Although we see line-of-sight problems in all markets, it seems to be a big problem for houses of worship. Maybe because audience members do a lot of standing up and sitting down.

“Antennas are often set too low,” says Kent Margraves of WAVE, a top-notch integrator based out of North Carolina specializing in houses of worship, including Saddleback. “FOH guys don’t want to put antennas up on stands, but that’s a terrible mistake.”

External antennas are kept discreetly at eye level, just above the heads of seated audience members. As soon as the first rows in front of the FOH position get up, that clean line-of-sight signal gets snipped.

Saddleback was also kind enough to give us comparison scans for when the audience was seated vs when they were standing.

External antennas should be on stands well above the tallest audience member with a clear view of the stage. They can also be mounted anywhere within the facility that also provides line-of-sight—like on walls or ceilings—using long runs of low-loss coaxial cable or an RFoF system like the RF Optix.

“The best systems are not installed FOH at all,” continues Kent. “The receivers are backstage in a production rack and the antennas are flown beside or above stage.”

But we assume you’re using external antennas in the first place. Much worse than a low flying external is burying stock whip/dipole antennas in a closed rack housing, or scattering receivers around the booth.

Radio interference on or around the stage

Any kind of electronic device has the potential to create harmful radio interference. Most devices emit some kind of RFI, but the ones up on the stage are most likely to interfere with wireless audio equipment (especially IEM belt packs) because of their proximity, so the stage should be checked and checked again for culprits.

Bands carry all sorts of troublemakers with them everywhere they go. Amps, keyboards, pedals, effects processors, can all produce powerful interference, whether they are malfunctioning or not. If possible, choose frequencies when all the band’s equipment is powered up.

Kent suggests band members and anyone else allowed onstage be required to leave personal electronics in the greenroom. He also suggests vetting mixing equipment brought by the band for interference before letting it up onstage.