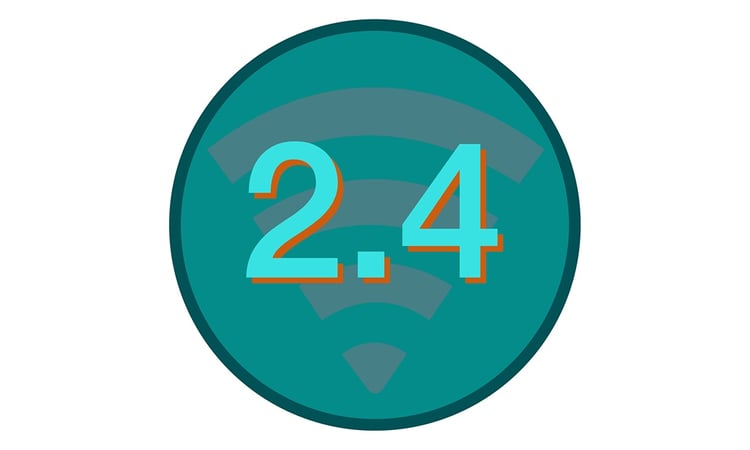 New 2.4 GHz wireless microphones dropped at this year's NAMM, including the AKG DMSTetrad, and Sennheiser EW-D1. While we are not prepared to offer critical reviews of these new models, we want to revisit the pros and cons of wireless microphones that operate on the 2.4 GHz ISM band.

2.4 GHz microphones operate in 83 MHz of spectrum between 2.400 GHz and 2.483 GHz. By comparison, most wireless microphones today operate at lower "UHF" frequencies between 470 MHz and 698 MHz.

Simple to operate (under ideal conditions). The selling points for most of these models are “easy,” “easy,” and “easy.” The predictable locations of WiFi channels allow 2.4 GHz mics to sniff out where occupied frequencies are and are not, and they are also great at communicating with other mics and self coordinating (this is probably because 2.4 GHz microchips ship with more advanced radio protocols than off the shelf UHF chips). 2.4 GHz chips do not use FM modulation, and they are (at least the ones we’ve seen) all digital, so they are less susceptible to the intermodulation artifacts that plague multi-channel UHF FM systems. Mics from professional grade manufacturers like Shure, Sennheiser, AKG, Line6, and AT have tuned their modulation and circuitry to bring latency down to acceptable levels, as opposed to simply sending audio over WiFi.

International compliance. Properly manufactured 2.4 GHz microphones can be used in nearly every country without a license, in the same frequency range. UHF frequency bands are not synchronized across international borders, and the rules for wireless microphones vary from country to country. In some countries like the U.K. operating professional UHF equipment requires a permanent or temporary license, and half of the equipment sold in the UK in the 700 MHz band is illegal to use in the United States. 2.4 GHz mics give users a free pass from all the regulatory confusion.

Price. Smaller wavelengths means smaller antennas and electronic components, which means manufacturers can pack more features into a 2.4 than a UHF at the same price point.

Channel count. Manufacturers are careful to state their 2.4 GHz offerings are channel limited. The EW-D1 footnotes up to eight channels “in an ideal RF environment” (some press releases state 15 channels. I don’t know which spec is correct). The DMSTetrad specifies “up to four channels” per receiver. 2.4 GHz mics aren’t able to offer as many channels because 2.4 GHz chips operate on less spectrum, ~83 MHz, compared with available manufacturer specific blocks/bands adding up to ~230 MHz in UHF. And because 2.4 GHz is so dang crowded with bluetooth and WiFi thingamabobs, you rarely get all of that spectrum to yourself.

Range and in-line attenuation. Given the same transmission power, under the same conditions, a UHF microphone will provide greater range than a 2.4 GHz microphone. In our experience, many overestimate just how much range they actually need (if the stage is within 100’ of the performer, you shoul be OK), and 2.4 GHz microphones sometimes have more powerful transmitters to compensate for the loss (The EW-D1 and DMSTetrad both have a maximum output of 100 mW, 2X the max for unlicensed UHF). You can also use a directional antenna to significantly improve range, but remember that transmission line (cable) loss is much greater at 2.4 GHz than UHF, so long cable runs are difficult.

Latency. Since all professional grade 2.4 GHz mics are digital, latency is a bit higher than UHF analog. But the delays aren’t all that bad on digital microphones, and don’t really stand too far behind UHF digital microphones. In fact, Line6 has latency that beats some UHF digital mics. Latency on 2.4 is only an issue when shows are being recorded for broadcast, or a picky artist starts complaining about monitor delay.

IT Department Wrath: 2.4 GHz is the same band that most WiFi devices use. You can’t always expect to waltz into a facility - especially a secure one - and power up a 2.4 GHz device without someone from the IT department hunting you down and telling you to put it away. WiFi in corporate and stadium settings is carefully calibrated and, more often than not, completely full. IT professionals have tools that let them know if something is interfering with their network.

2.4 GHz microphones are a great choice for those who only need a few channels and want hassle free setup. For those who need lots of channels and ultra low latency, top-tier UHF mics are still the best choice.

2.4 GHz audio fidelity from reputable manufacturers should be more than acceptable for the vast majority of applications.

While they may provide additional long term security over 600 MHz microphones - which will soon be illegal - they do not guarantee complete immunity from interference. A vast sea of other devices uses the 2.4 GHz band, and their numbers will only increase as the Internet of Things explodes.