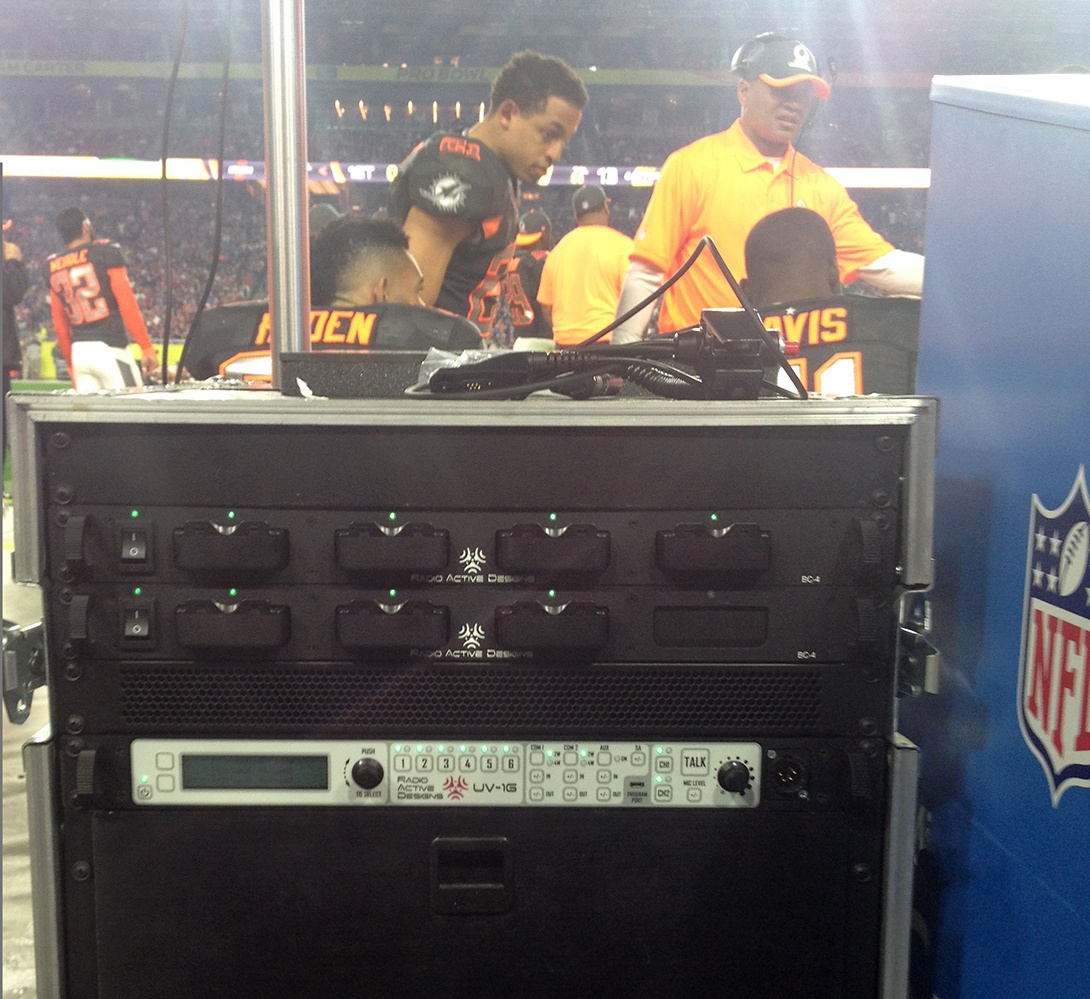 Yesterday we spoke with wireless guru James Stoffo during a rare break in his busy end of season football schedule. On Sunday, James worked with comm and wireless audio frequencies for the Pro Bowl, and next Sunday he’s headed to the Super Bowl. This year is extra special for James because he and the team at Radio Active Designs (RAD) get to see their high performance UHF/VHF intercom system, the UV-1G, put to the test in the toughest RF environments imaginable - confirming that the UV-1G is a bulletproof game changer for the industry.

So, the Pro Bowl. How did it go last night?

I’m pleased with how it went. This event takes the cake for the most units that RAD has had out so far. ATK had 24 units, the NFL was also testing a few for coach sideline communications, and ESPN has a couple of systems. So, there were upwards of 50 packs and probably eight base stations.

The environment we were in - it is an ungodly environment, just horrible - a lot of RF inside one venue. The noise floor is through the roof. I monitor the spectrum, and it pretty much looked like an upside down comb. I was nervous the whole time, and it’s only going to get worse at the Super Bowl next week.

Overall, I’m exhausted, but it is really exhilarating to walk around and see all of this Radio Active Designs equipment all over the place, instead of just in the trade show booth. 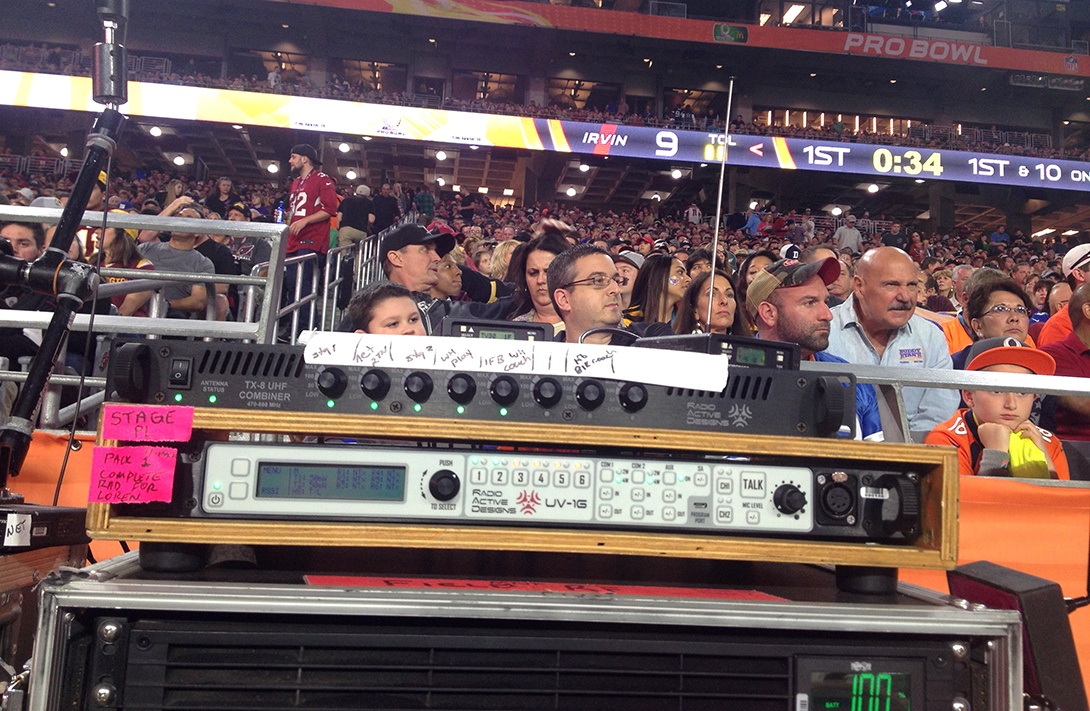 Did you get any comments from individual crew members?

Yeah. I talked to just about everybody, actually. I went and talked to the RF Techs for ESPN, whose system was rented through CP Communications, and they were thrilled to death with the system.

Henry Cohen and I have been in the wireless intercom business for a long time. We knew what we wanted and what we didn’t want out of a comm, because we’ve been burned on our own shows. We took that experience and put it into the UV-1G and everyone has been very happy with it.

The range was spectacular. We were able to cover not only the field, but the halftime stage which was on a bridge, and we were able to walk all the way across the field and into tunnels where we had equipment rooms, and bathrooms. Frankly, I was shocked at the range on the thing. If someone would have said ‘James, can this system walk this far?’ I would not have been able to guarantee it as a manufacturer, until now.

You know what it is, we’ve all forgotten, VHF bends around objects and propagates better than UHF does. VHF is something that most people haven’t had to play with in the professional community for 20 years. It went away in 1991, ‘92. Now that it’s back people are going to say ‘oh yeah! Cable loss is only 1/3rd what it is with UHF; We can run 300’ of cable and have the same amount of loss as 100’ of UHF cable.’ People are going to start finding all this stuff out that older guys with the grey hair remember. Younger guys are going to be pleasantly surprised that it’s actually easier to deal with than UHF. 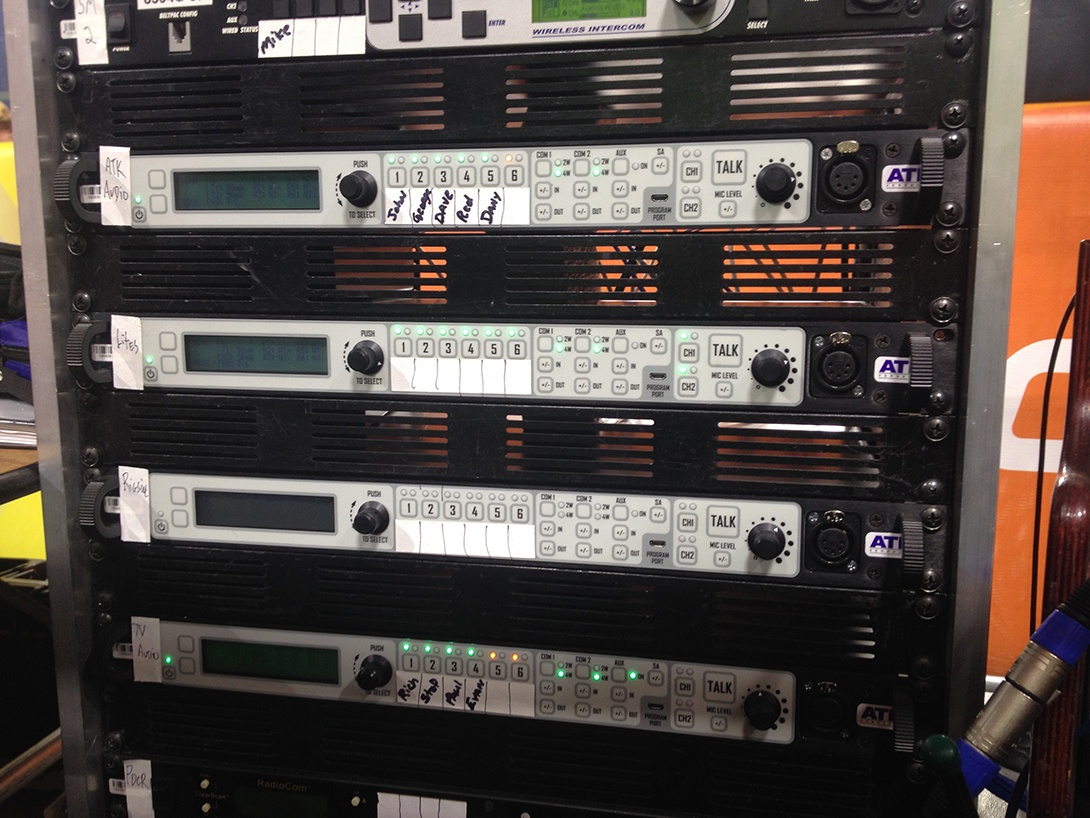 And you’ve got the Super Bowl next week, how are you preparing?

Is this Super Bowl going to be different from previous Super Bowls in any way? Or is it just another notch in the ole’ belt for James?

The Super Bowl was always the most stressful event I had to work all year. I actually took the last couple of years off. This is my fifteenth Super Bowl, but I took four years off. I’m going to get back into this, not cold exactly, but I know a lot of things have changed. I know the drill and I’m sure the RF environment is going to be more intense than it’s ever been, but I also have to say from an RF designer's perspective, just being able to go back to VHF and pull out 50 or 60 belt packs from UHF is going to help immensely. Instead of having to put people 200 kHz, 300 kHz, 400 kHz apart, now we can go 50 kHz apart. My packs are 50 kHz and 60 kHz apart, so, I’m packing in dozens of frequencies where before we could only put one or two.

I am not going to go into this with any delusion that it’s going to be easy. If anything, it will be a little easier next year because there will be more VHF stuff floating around. This could very well be the most difficult Super Bowl up to this point. Until we figure out what’s going to happen with the 600 MHz auction and white space devices, I plan on pulling every single trick in the book. I’m going to have helical antennas, I’m gonna have long cables, I’m gonna have my guys out on the field so the antennas are as close to the performers as possible during the halftime show and during the National Anthem. Filters, isolators, circulators, we have all the toys here, and we are going to use them.