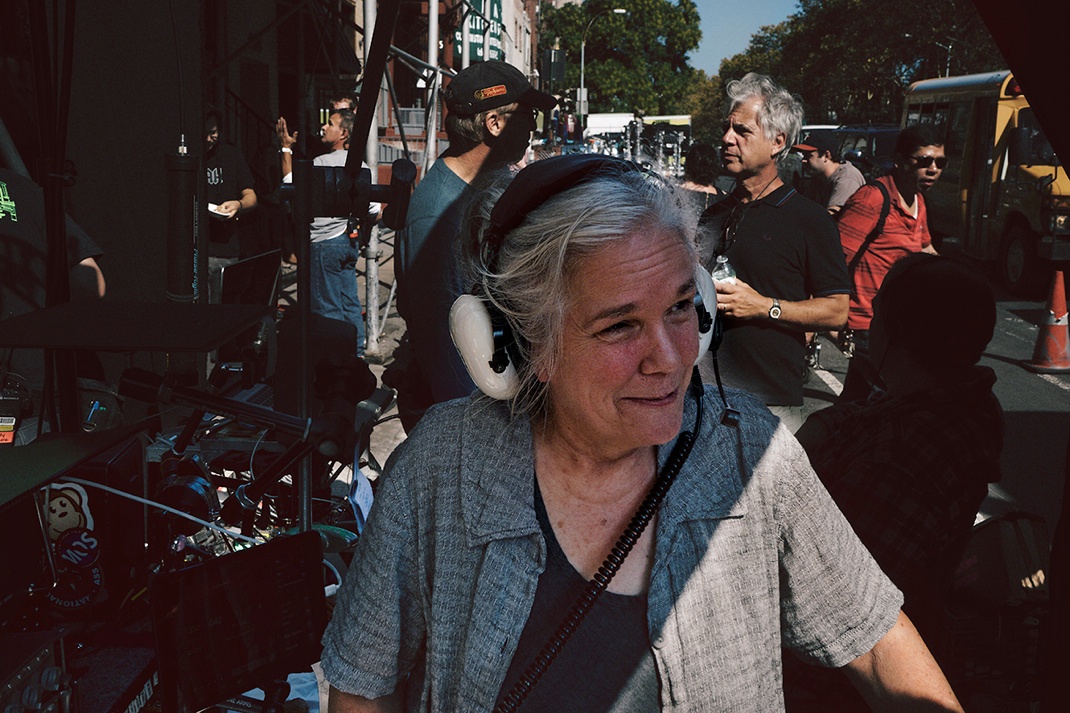 This is Jan McLaughlin, CAS. She is one of the New York film community's most respected production sound mixers. I have the pleasure of spending the afternoon with her on the set of Showtime’s Nurse Jackie.

Her work on Nurse Jackie has earned her two Emmy awards, and other nominations. But there is no time to discuss them.

We are outside Sammy’s Roumanian Steakhouse, a hole-in-the-wall Manhattan relic filled with vintage tchotchkes. The cameras and actors are inside, working a scene.

Extras pour in and out of the side entrance to the basement. The storefront is wrapped in a facade of black stage-cloth. Surly crewmen emerge and disappear through the drapery at regular intervals.

Jan is out on the street with her parked caravan of gleaming, specialized sound instruments. Her Sound Utility assistant, Joe, a freshly minted NYU film student and an accomplished film maker in his own right, stands at the ready, and the Music Playback Operator, Jason, lounges in his chair as he waits for a cue.

“Some mixers like to be nearer to the set, where the action is,” Jan explains. “I prefer to stay on the boundaries, so I can concentrate. It’s too loud over at the village.”

“The village” is slang for the garden of monitors and folding chairs where the director and his/her entourage helm the production. 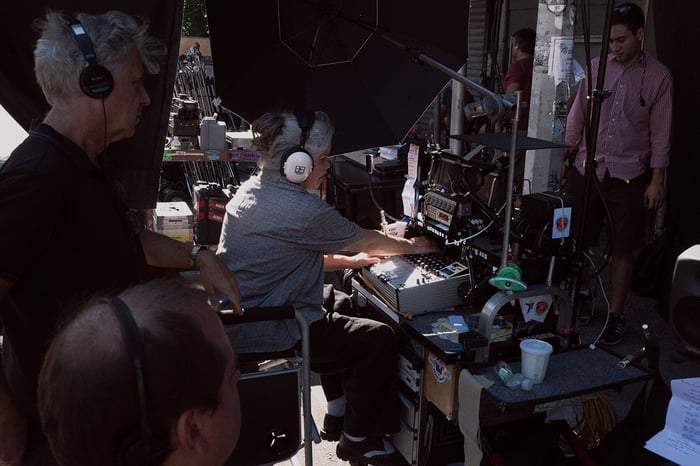 This is my first time on a set, but I already suspect Jan McLaughlin is a production sound celebrity, as far as they go. Her rakish silver hair does not hurt the image, and at the time of my visit there are not one, but two, other observers lurking behind Jan’s shoulder, watching her work.

One of them is Jack Norflus, a fellow mixer who works on CBS’ 60 Minutes and 48 Hours, who is also a consultant to Zaxcom. The other guy I do not find time to meet, but he seems more interested in watching Jan than speaking to me. (I later learn he is Music Supervisor Michael Hill, on set to see his musical choice put to good use.)

She has control of the machinery in front of her, moving from knobs to faders, and tapping away at the red timecode button on a touchscreen to her right. She works with speed and intention, not panic.

It is very easy to become anxious here. A film set is an uneasy mixture of aching boredom and intense fear.

Boredom: while the director reviews something minuscule at the village while dozens of union workers puff e-cigarettes and check their phones.

Fear: as sharp calls of “rolling!” ricochet down a production assistant daisy chain, following the mysterious river of cables that flows into the basement, which I am told leads to the actual set, where I am forbidden from going, despite my yearnings. 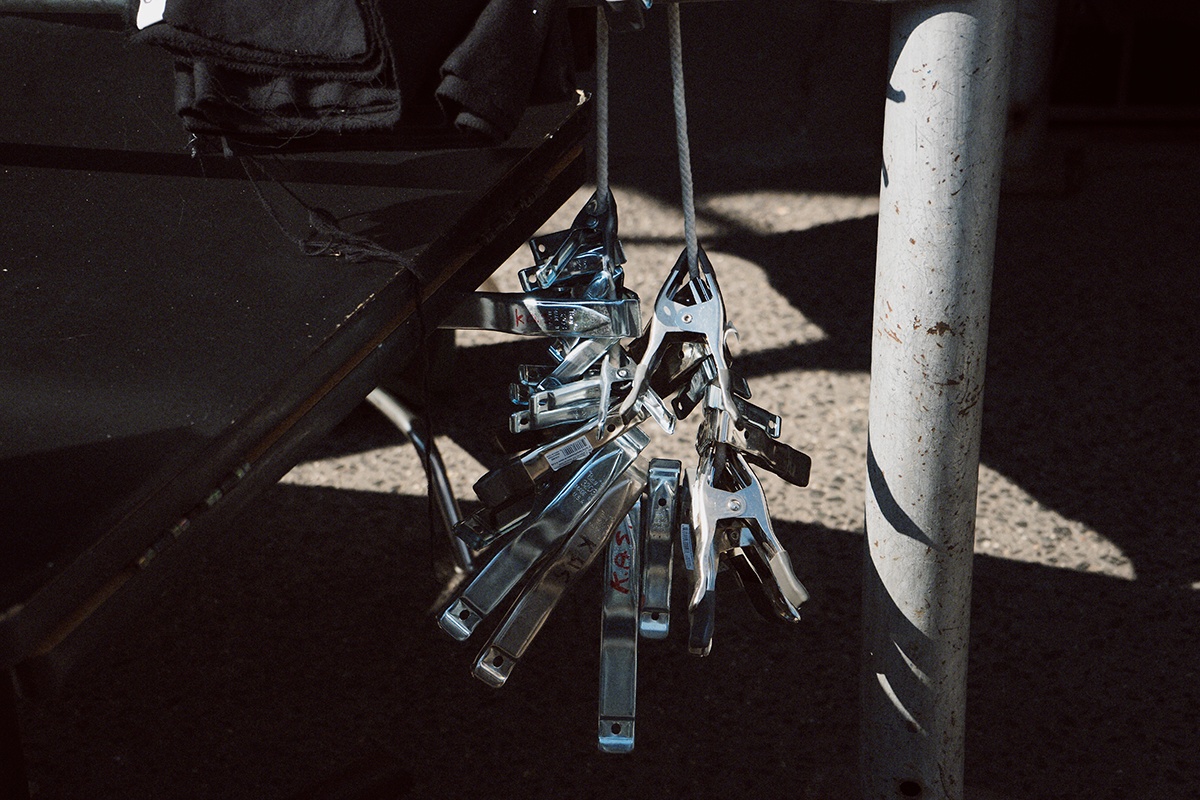 I begin conversations with crewmen, but only sometimes finish. “Rolling!” puts a halt to them, or crucial intelligence is delivered to their earpieces and they simply walk away.

Jan pauses between takes to roll a cigarette from a tin of loose tobacco stowed in the depths of her cart, uttering some bit of praise for her team, or a remark about a technical decision made inside.

Production sound on a show of this caliber is a ballet, Jack - my interpreter - explains, that minimizes audio disturbances and maximizes emotional impact, while also minimizing further work required from mixers at the post-production house.

A good production sound mixer is able to extract virtually all dialog uttered by expensive actors on location, thereby forgoing costly, time consuming ADR. The best mixers are able to produce a semi-polished gem of dialog that need only be breathed on and honed by post before the final mix is delivered to studio brass.

On tightly scheduled projects like Nurse Jackie, every second counts.

Jan keeps a scroll of the script to the left of her console, and follows along with the words as she listens to the actors speak them through her microphones. When two actors hug, for example, she pulls down the levels on their lavalieres to dodge the dreaded “thrfump” of clothing and mic-on-mic contact. 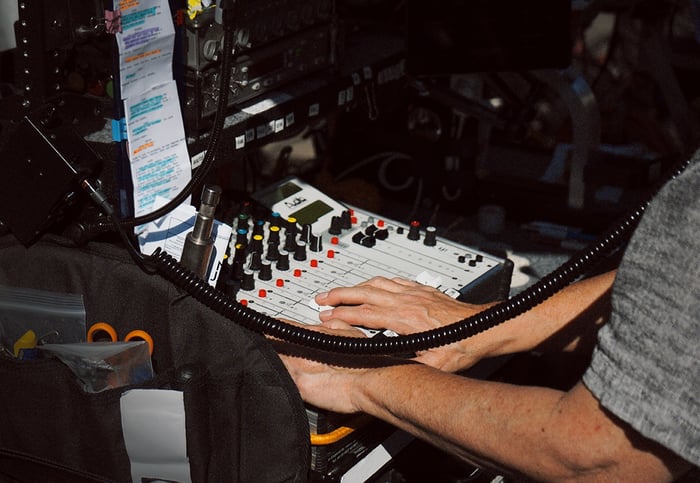 But technical skill is not the only attribute that distinguishes Jan. She has deep philosophies on the art and craft of film and production sound, which she compares “more to architecture,” than to art.

"You have to be a skilled diplomat. Part of our job is to convince each and every department that helping the sound department will prove the best part of their day."

It is easy to see her diplomacy in the way she interacts with her team, and she speaks with a directness that is unique.

For example, she evaluates production sound against her previous careers - law and music - using an interesting metric: “The percentage of assholes is much lower, in this field, than in others - there are probably only 2% assholes, and 0% on Nurse Jackie. I can deal with that.”

That might come off as blunt, but in the context of her work and otherwise generous personality, the bluntness seems refreshing, or even necessary. 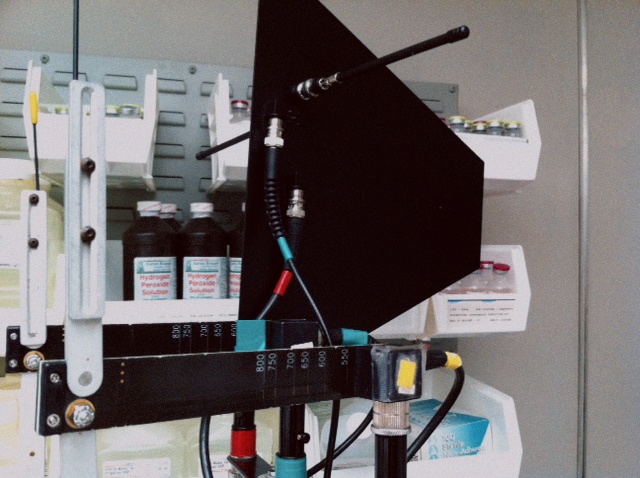 Our Diversity Fin antenna traveled with Jan to the soundstage set this week. I wonder if there are real drugs in those bottles!

Communication, however blunt, is at the heart of a film set. There are too many people involved to manage with anything less. What hits me the most is the surreal and futuristic state of communication that a film set provides to its individual participants.

Upon arrival, I was given a headset that allows me to hear Jan’s rough mix. The audio feed includes the actors’ lavalieres, the general purpose boom microphone, and the boom operator’s intercom. I hear the chattering of the actors and crew transmitted wirelessly from inside the building out to Jan’s cart on the street. When a take begins, the chattering stops as the actors speak their lines.

We also have visual feeds from three Arri Alexa cameras on a triptych of monitors that ride above the soundboard, so we see the different shots as they unfold. Jan, I presume, is also listening to the IFBs and other comm systems on her super cool headphones. 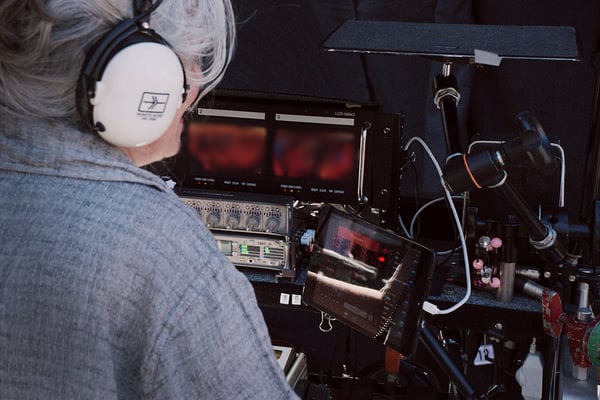 The effect is one of bilocation and connectedness. We are both out on the street at the soundcart talking to one another, and inside with the actors and crew, simultaneously. When a take begins or some other event occurs, the necessary people all move in unison, without speaking, to where they are needed. Conversations are taking place with one ear in the network of wires connecting the microphones and headsets, and the other to the world outside, often about the same thing.

This state of existence is probably familiar to anyone who has worked a real-time project where personnel use intercoms, but on a film set it seems especially poignant.

In fact, when the day is done and I hand over my headset, I feel a dull bit of longing as I watch the device slide back in its drawer. I thank Jan for her time and walk uptown to the subway, alone.