In just over a year, Texas native and Nashville expat Justin McClellan has carved out quite a name for himself in the high stakes world of com and low power wireless audio device frequency coordination. His company, Communication Handled, has booked some truly massive gigs between its founding in April 2013 and the present day. 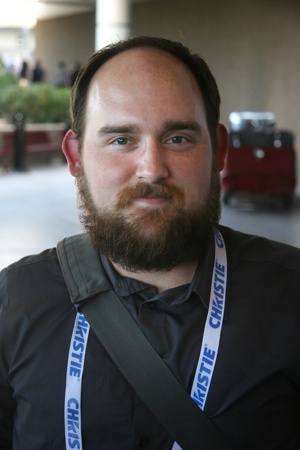 RF Venue had the pleasure of Justin's company at this year's InfoComm. He joined us as a manufacturer's representative, and we learned a lot from him about what it takes to pull off a flawless show with dozens of mics and hundreds of intercoms. When we got back to Boston, I gave Justin a ring so he could tell us a little bit more about what he does at Communication Handled. [The Communication Handled website, by the way, is down. Contact Justin via justinm@comhandled.com]

What got you into A/V and RF to begin with? And I’m talking in the formative years.

I was going to college and wanted to be a pilot in the Marine Corps—I wanted to fly A10s—and a friend of mine told me that I could get a scholarship to Shawnee Community College if I joined the college band and choir. Shawnee is this little college in Illinois. I joined both of those and got a full ride scholarship, even though I didn’t know how to play music. An instructor liked my work ethic and asked me to start working as the technical student worker for the music department. I started maintaining the studio at the school, setting up for all the event, etc. Through that, he taught me signal flow and how speakers work. Then I decided I wanted to go into the pro audio industry.

One day I was on my way to work and there was someone giving a speech in a classroom. It was a guy named Stan Hunter who I had known for years. We go to lunch with my instructor. My instructor says, ‘hey Stan, you need to get this kid hooked up with a job.’ And he’s like ‘you’re from Texas, right? I know the perfect company.’

He called up Alford Media in Dallas and said you should think about hiring this kid. Then I went in for a so called interview, and was told ‘whenever you’re ready you have a job in the shop.’ I started off in the shop in May, and was doing road gigs by September. I was almost exclusively on the road that next January, and was a full fledged roadie the next October.

And to this day, you’ve still never flown an A10?

Is that bittersweet for you, Justin?

It’s not because they don’t actually really use those aircraft a lot anymore. They’re slowly phasing them out.

So you did the roadie stuff with Alford for a while. You did that up until you broke with Alford to form Communication Handled.

Why did you decide to do that? To form your own company?

While I was with Alford I had become their main RF and coms guy on staff. I was really, really enjoying what I was getting to do. And then, well, I guess my curiosity got the best of me because I wanted to see what was outside Alford’s clientele. They do some high end large gigs, but I knew there was more out there. I knew they weren’t doing the Grammy’s, the Emmy’s, and all these large sports shows and broadcasting events. I kept hearing about how massive the RF and coms are for those events and I wanted to be a part of that. 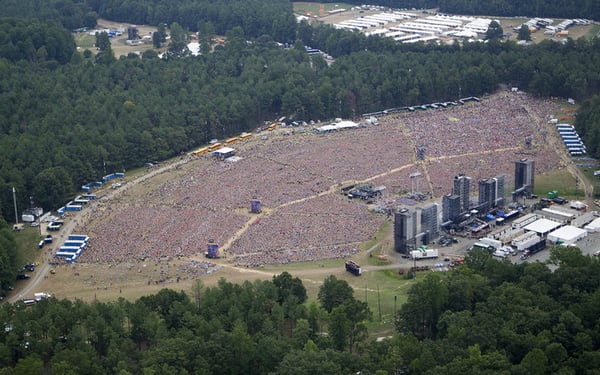 67,000 beige-clad Boy Scouts at the Centennial Jamboree Celebration—for which Justin was RF/Comms Tech. The show was produced by Corporate Magic with Alford Media providing AVL support.

Since going freelance I’ve done Fox up Front, the CMT awards this past year, a large multi-level marketing show with 16 or 17,000 people. I also did a large fast food company corporate event where I was the communications technician where 50 people were on headset.

Run me through a typical show

Before I even get on a show, I’ll get booked as the RF coordinator. I’ll email the client a couple months out and ask them of their needs. That helps me approach what gear I need to be looking at.

Then, I’ll open up my coordination software IAS, download the latest file, and just get a very basic coordination going with the basic information I was given.

Then, we arrive on site. Normally I’ll come in the same day that I fly in and bring in my spectrum analyzer and do a scan of the room to see what’s there. Take that back, and load it  into IAS and start looking into the coordination. I’ll look at the FCC database to see what might be there, and compare it to what is actually there, and then make some adjustments in the actual room.

Trucks get unloaded, I’ll start setting up gear and setting up frequencies. Then I’ll do what we call ‘war games.’ I’ll fire up all the transmitters only a few feet apart from one another and start looking for IMD artifacts that might not have been calculated properly. I’’ll look for issues with the gear that the software missed.

Once I get that nailed down I’m usually set to go unless there’s a failure. Before I get on site I also ask for vectorworks or a CAD file to look for potential sources of interference like an LED wall. That helps me with antenna placement. 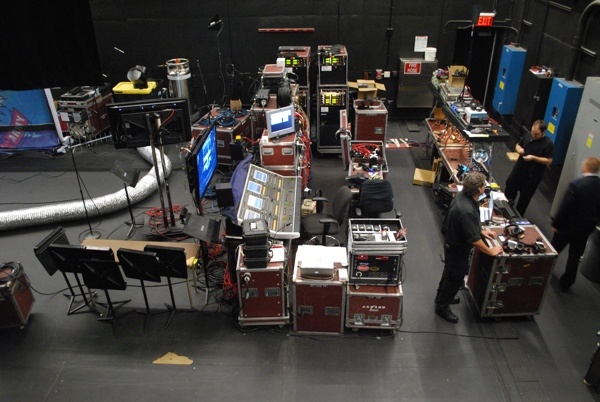 Backstage at a show for the Salvation Army, while Justin was still at Alford. Justin was RF/Com Tech. Large musical with over 20 headset mics that each had to be changed at least 7 times throughout the show. A live orchestra played throughout.

What’s different about doing these corporate gigs that makes them distinct from live sound or other types of live production audio?

You always have to say yes, no matter how crazy you think the request is. Because if they want it, they’re paying for it, so they get it, and we have to find the solution to make it happen. If they want 20 wireless on stage, and they’ve got LED walls above and behind the deck, and I can’t get an antenna out front, I have to find a solution for that, and I have to say yes. Show days I have to wear at least business casual to the gig.

Which is a real shock to the typical roadie, to have to wear business casual. Traumatic even. 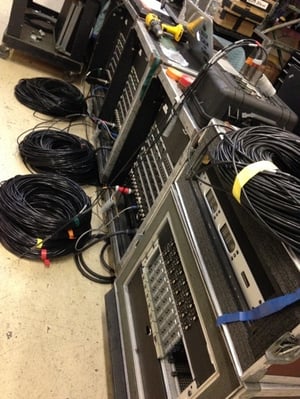 Prep work on a Riedel comm rig at the Clair shop in Nashville. Rig was then sent to Salt Lake City for a show.

Have you encountered any embarrassing or entertaining moments in these last few months that you would like to share?

One cool thing was this show in Salt Lake for a multi-level marketing company. It was in the basketball arena for the Utah Jazz. From the very top tier of seating, the CEO flew in on a hoverboard down to the stage. They had automation cabling coming down, and I had to make sure that there was communications with the guys who were operating the automation at the back of the arena to the floor, which was almost three hundred feet away.

That’s how you make an entrance.

Yeah, that was unique.

Honestly, that’s almost too corny to believe. He really did that?

He absolutely did. The board had lights that flashed on it, and when he landed there was pyro that went off on the side of the stage.

OK, before we let you go, how did you hear about RF Venue?

Me and my buddy Ryan Sartell had both been talking about trying to find an RF over fiber product, but everything we kept looking at was not cost effective, even if we shared the cost. Then all of a sudden he was like ‘dude, look what I just found.’ I think it was a day or two after you guys had released the RF Optix on your website. And within a second, we were in. We were sending in emails and communicating with you guys to try and make that happen.

At the very same time we get booked on this gig in DC that was going to have a crazy long antenna run. We knew it would be around 300 feet for a proper antenna run, which we knew wasn’t going to work with standard plenum cable, that’s when we did the conference call with Chris Regan and worked out getting the Optix for that show.