Induction hearing loops, or simply hearing loops, are one of three types of wireless assistive listening device facilities implement to accommodate the hard of hearing (the others being infrared and FM radio). They are, deceptively, the simplest of these three systems. While simple in theory, the practical deployment of magnetic induction fields can be quite complex. As a result, poorly designed hearing loops are all too common. 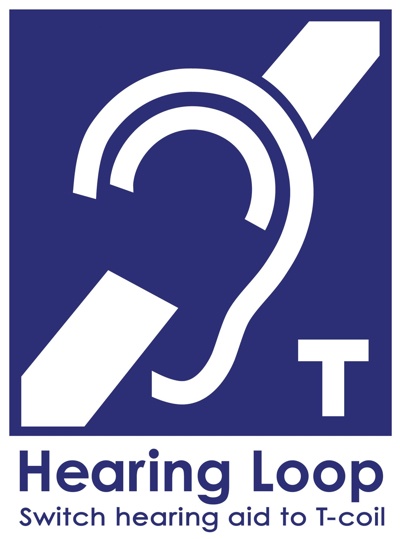 Hearing loops consist of a wire coil embedded in the floor, which creates a varying magnetic field inside a room. Many hearing aids incorporate an element called a telecoil that converts changes in magnetic field into electrical energy, which are then converted into mechanical sound by the hearing aid that is pushed into the ear canal.

In its most basic configuration, a hearing loop is a plain piece of wire connecting to the electrical outputs of an audio system and stretched around the perimeter of a room. Changes in current corresponding to differences in audio amplitude and frequency create magnetic fields of varying intensity, which are picked up by the hearing aid.

“In an audio system, you use voltage as an amplifier,” says Tim Vandemere of Hearing Loop Systems. “In a loop system we use a current driver for an amplifier.  The T-coil is just a coil of wire that’s in the hearing aid, that’s like the other half of the speaker, which is turning that magnetic field into basic electrical energy.”

“A lot of guys think the basic concept is you lay a wire around the outside of the room, and hook it to an amplifier, and it works. But, it’s not always so simple.”

An induction loop creates a magnetic field that is extremely sensitive to a number of electrical, magnetic, and physical forces, objects, and devices that will disrupt the field and create audible interference for the hearing aid user. The most vexing problem is that metals of any sort influence the shape and strength of the magnetic field. The shape and size of the loops often need to be designed in such a way to prevent interaction with structural metals, as well as adjacent hearing loop fields. 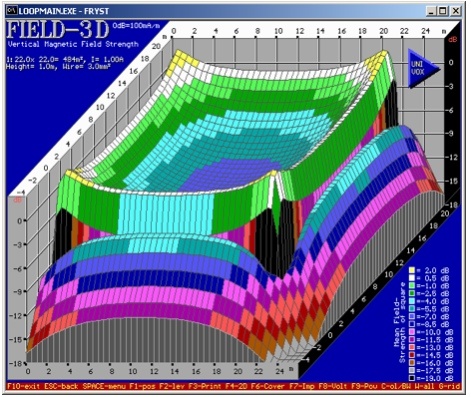 Computer model of a magnetic field from a poorly installed loop. Note the large changes in amplitude across the field. Courtesy Juliette Sterkens.

“If the loop is too large, for example,” explains Tim, “there will be a large variance in magnetic field level throughout the loop. There are ways of laying the loop out correctly, which is the biggest thing. There’s some math involved. What we’ll do is, a lot of times, we’ll build a phased array. We’ve done a lot of them in classrooms, where you don’t want audio from classroom A to spill to classroom B, and if you do a perimeter loop it spills all over the place. So we’ll build a phased array and that tightens up the whole thing a lot like an antenna's coverage pattern.”

The delicate field can also be disrupted by strong sources of electromagnetic energy, usually spurious in nature, like fluorescent light ballasts, high-voltage equipment, and transformers. A facilities’ electrical wiring can even create magnetic fields of their own. Poor electrician’s work can manifest as an incessant 60 Hz whine.

Hearing loops are becoming more and more common, but they still lag behind the more conventional IR and FM types of assistive listening devices. Which is a shame, because hearing loops are in strong demand with the hard of hearing.

“Where are done well and done right, it is much preferred by people who have hearing loss than to the FM and IR systems,” says Dr. Dave Myers of Hope College, who advocates for hearing loop adoption. “The other thing that sometimes people don’t appreciate is that today, the percentage of hearing aids and cochlear implants that have telecoils is up to about 70%.”

Audiologist Juliette Sterkens explains that hearing loops are exponentially more convenient to the hard of hearing, and work much better than they used to. “These are not your grandfathers hearing loops, and these are not your grandfather’s hearing aids,” she says. “[Previous A/V integrators] were dealing with telecoils that were not pre-amplified. Today’s hearing aids have pre-amplified telecoils, and European manufacturers make sure the telecoil and microphone response are matched with a 100 milliamp/meter input, so if you switch from microphone to telecoil, the response matches."

Despite it's many advantages, loop installation is more expensive, up front, than competing technologies. Also, proper loop installation requires a few careful calculations to ensure even coverage and proper operation. As a result, the learning curve for most A/V pros is fairly steep. Proper training of employees before the install, and diagnostic techniques to measure the magnetic field on-site are required to make the loop worthwhile.

So, why should an A/V pro invest time and potentially money in training to learn the art of the loop, or farm out the job to a consultant when there are simpler and more accessible IR and FM systems out there already? Both Dr. Myers and Dr. Sterkens report that hearing loop installations are steeply on the rise because of strong consumer demand. And if you don’t believe them, just ask Joe Duarte, a life long hearing aid user who now designs and builds induction hearing loops the right way for a growing portfolio of national and international clients.

“I’ve dedicated to my life to installing these because they make such a big difference to someone who is hearing impaired,” he explains.” I’ve been using hearing aids all my life. Back in 1960s when I had a body hearing aid, I would use loops with my hearing aids, but still did not have enough discrimination. Now with a hearing loop, I actually have 90% discrimination. If I don’t have the hearing loop, I only got 60% or less. The loops made a major big difference to me. Quite a few people even cry the first time they use a loop, because they start discriminating sounds 100% for the first time in their life. It’s life changing.”