Everything about Nascar is gigantic. Upwards of 150,000 fans at single events, plus 40,000 staff to boot. Venue sizes approaching or even larger than four square miles. How do you organize and communicate at an event like this? Well, at Texas Motor Speedway last weekend there were 4,000 two way radios in use across three races. It is no exaggeration to say that NASCAR is one of the most densely packed and challenging wireless audio events in the world.

The official supplier of two-way radio gear and coordination services at NASCAR and International Motor Sports events is Racing Radios, based out of Forest Park, GA. They got their start when NASCAR approached their parent company, Diversified Electronics, in the 70s for help with radios used by racing teams and pit crews. We spoke with Tony Cornacchia, head of NASCAR and Special Projects at Racing Radios, about what it takes to coordinate thousands of critical conversations at this massive spectator sport using two-way radios. 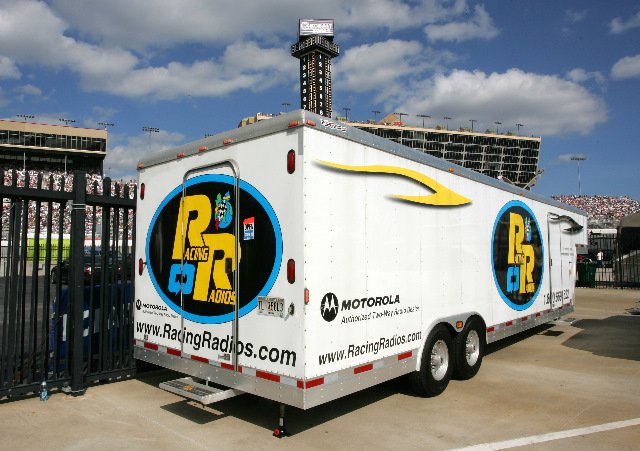 “We do pretty much everything. Race control and officials communicate on our system. The fire and safety channel coordinate all of the equipment on the racetrack like ambulances, fire trucks, wreckers, jet dryers, clean up. Then you’ve got 43 teams with drivers, pit crew, and spotters, and other ancillary stock like ticketing, marketing and all that kind of stuff. Plus broadcasting support and the TV compound.”

Racing Radios uses both digital and analog Motorola radios, along with a host of specialized accessories that they manufacture. Drivers are equipped with analogue units wired through the car harness to the helmet, where there’s a wireless mic and an earpiece similar to a custom molded IEM. “Each of the 43 drivers has a spotter standing on top of the grandstand,” says Tony. “They’re communicating with the driver telling them inside outside, high low, and sometimes the crew chief interjects lap speeds and talks to the driver to figure out pitch strategy.”

And that’s just for the cars themselves. Many of the 40,000 staff, media, and safety personnel also communicate with two-ways, all with no more than 16 channels available, making for a very tight squeeze. 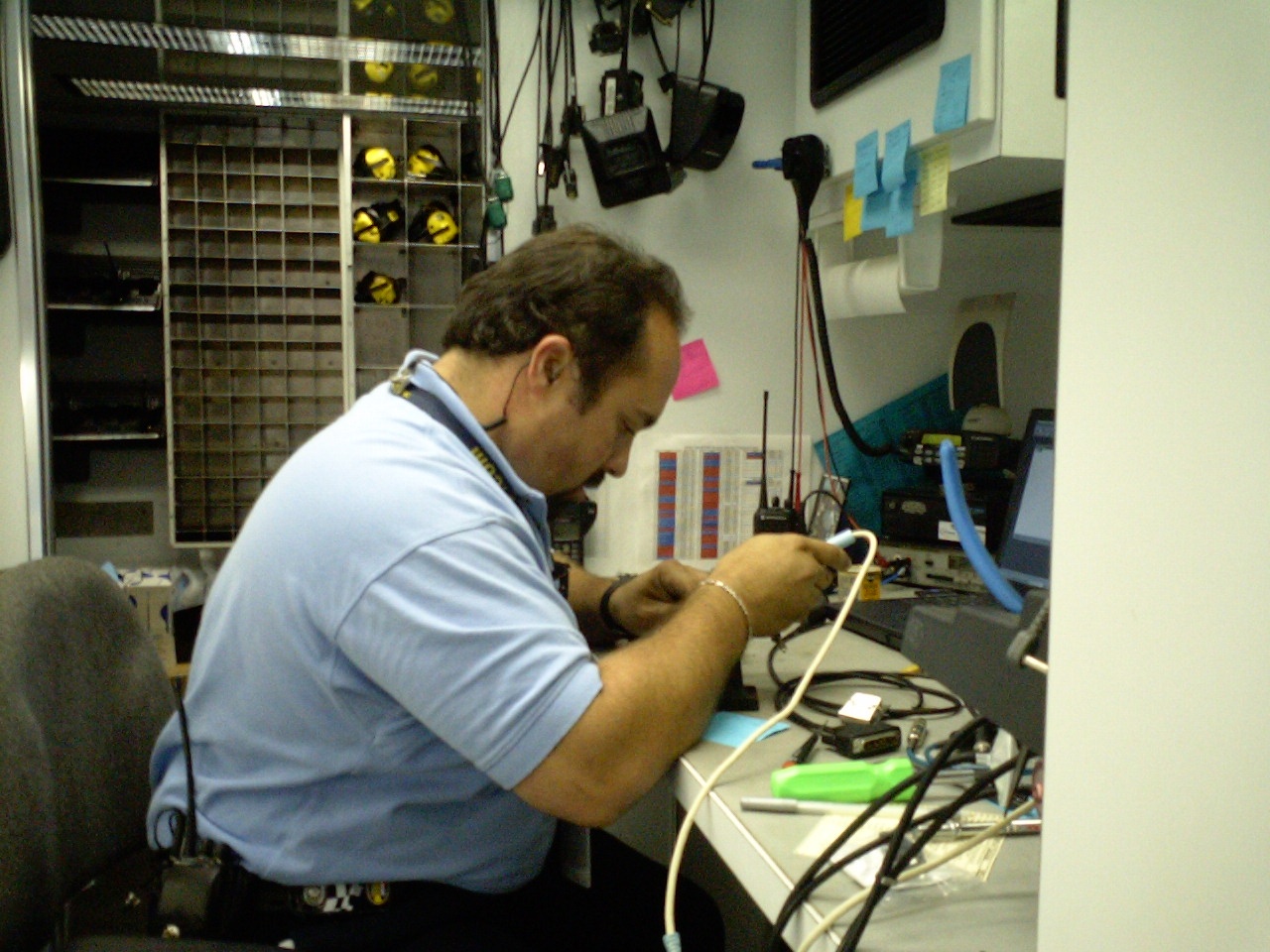 Tony at work in the trailer.

Racing Radios arrives before a race and manually monitors the 200-300 frequencies that are available in the 450-470 MHz band where the Motorola two-ways operate, by listening in to as many frequencies as possible for interference and noise. “Probably 90 percent of the time we utilize the same frequencies that we always do,” says Tony. “We’ve never had to make a change during an event, but sometimes before. We sit here and listen, and if we pick something up we’ll go to a spec[trum analyzer] and see how far away it is.”

Tony and the rest of the crew use a mobile command center in the back of an 18 wheeler. “We’ve got a general dynamics service monitor, a solder station, power supplies, all individual parts and pieces to repair everything. We just can’t have any down time.” 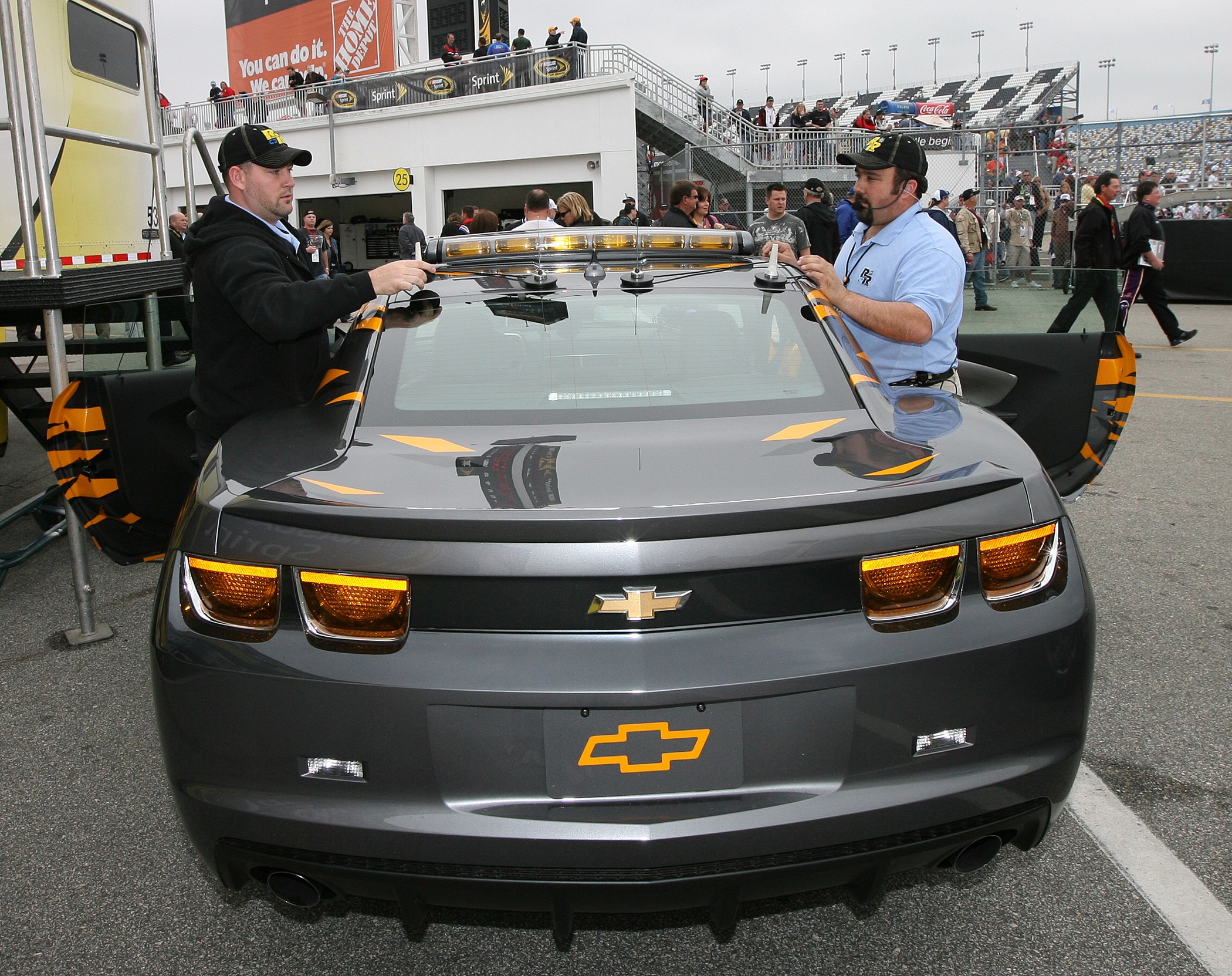 The command center is also equipped with an impressive array of receivers that monitors all the conversations from each of the 43 race reams on race day, and multiplexes it over to the TV compound, where it is recorded and made available for live listening on nascar.com.

Still, Tony admits that juggling this much RF is no walk in the park, and that there are still challenges to come. “It’s just going to get worse, with all the devices that people are bringing into the stands and other things,” he says. “As of right now, it is surprisingly coordinated without any specialized equipment. We’re getting to the point where, with 43 cup teams, we don’t even overlap TLs and DPLs because, in the spotter stand, they can actually bleed into each other because they’re so close... We even had Motorola tell us that we have probably the most combined RF in a given space in the world, outside of an offshore oil platform.”