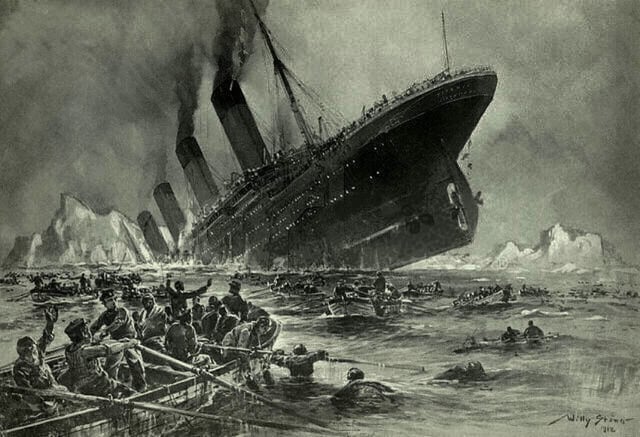 We tend to think of wireless device interference as a modern problem. But in 1912, the airwaves were a wild frontier. Competing signals weren’t just an occasional inconvenience, they were an expected and accepted part of radio communications. And this disorganization played a large part in the sinking of the Titanic--a detail fans of James Cameron's 1997 film may not remember, since it was deliberately left on the editing room floor.

Radios in 1912 were crude, mechanical devices. They sent morse code by belching out ticks of electromagnetic radiation in all directions by passing arcs of high voltage A/C across an electrode gap--i.e. a “spark gap” transmitter. The Titanic carried a 5 kW synchronous rotary spark discharge transmitter, which used a spinning plate lined with electrodes to emit a 500 KHz tone. The Titanic’s machine and most others only broadcast on two channels. This effectively promised that only a single radio could be on air for hundreds of miles around.

Radio operators had unofficial rules for taking turns on this extremely limited spectrum, like waiting turns and bowing out to important transmissions. But these good manners were not honored by the Titanic when she needed them most. A fellow radio operator on the nearby ship MV Mesaba, sent the following message a day before the crash:

At the time, the Titanic was transmitting a backlog of private messages from the ship’s wealthy passengers to a shore station in Newfoundland. When the warning came through and interrupted this task, radio officer Jack Phillips snapped back at the Mesaba:

A day later, as the Titanic sank into the Atlantic, assisting ships and base stations jockeyed for airspace to gather updates on the situation. Almost two hours after the collision, the uninformed German ship Frankfurt interrupted the Titanic’s furious distress signals to dumbly ask:

“what is the matter with u.”

Phillips responded, perhaps while water lapped at the door, “you fool, stdbi and keep out!”

We can’t draw strict parallels between the rudimentary spectral landscape of 1912 and the device-filled landscape we have today. But there were still ways "spectrum management" could have prevented the sinking--like if each transmitter/base station was tuned to a unique frequency, or if priority messages were always respected when the airwaves were full. In fact, the tragedy contributed to the swift passage of the Radio Act of 1912, which attempted to correct rudimentary spectrum management problems that contributed to the Titanic’s failure to acknowledge the warning (whatever the root cause, which is debated), and the confused response that followed. It was the first instance of radio regulation in the U.S. and an important step toward modern models like the FCC.