Ashland, MA, USA, February 9, 2022 — When someone says “go the distance” in the context of wireless technology, they’re not just speaking allegorically. Distance between transmitter and antenna is a key element in wireless RF device performance reliability, with signal power an additional significant factor. Consideration must also be given to antenna choice and positioning, which play a far greater role than even many seasoned professionals might realize. When St. Edmunds Church in San Marino, California, and the Colonel Bill Barber Marine Corps Memorial Park in Irvine reached out to Triton Technology Solutions to solve their RF-dropout problems, distance was at the heart of the matter, and in both cases solutions from RF Venue were the answer.

“St. Edmunds is an older church, and they had been working with a real mish-mash of antennas for some time,” explains Brian Rose, Vice President of Engineering at Triton Technology Solutions. “Their RF antenna was at the back of the church, at least 90 feet away from the altar, which is where their wireless microphones were being used most often. We installed a single RF Venue Diversity Fin® antenna in the balcony near the audio console and connected four new Shure ULXD4 wireless microphone receivers through an RF Venue DISTRO4™ antenna distribution amplifier, and their RF-dropout problems immediately disappeared.” Rose says that wireless microphone users now not only don’t experience dropouts but can also take their new wireless microphones to parts of the church they weren’t able to use them in the past, such as the baptismal font. “Before, if they were using them at the side or behind their pipe organ, the signal would get lost almost every time,” he says. “Now, it never drops out there or anywhere else in the sanctuary. They are now able to experience and enjoy their worship space fully and in ways they could only dream of before.” 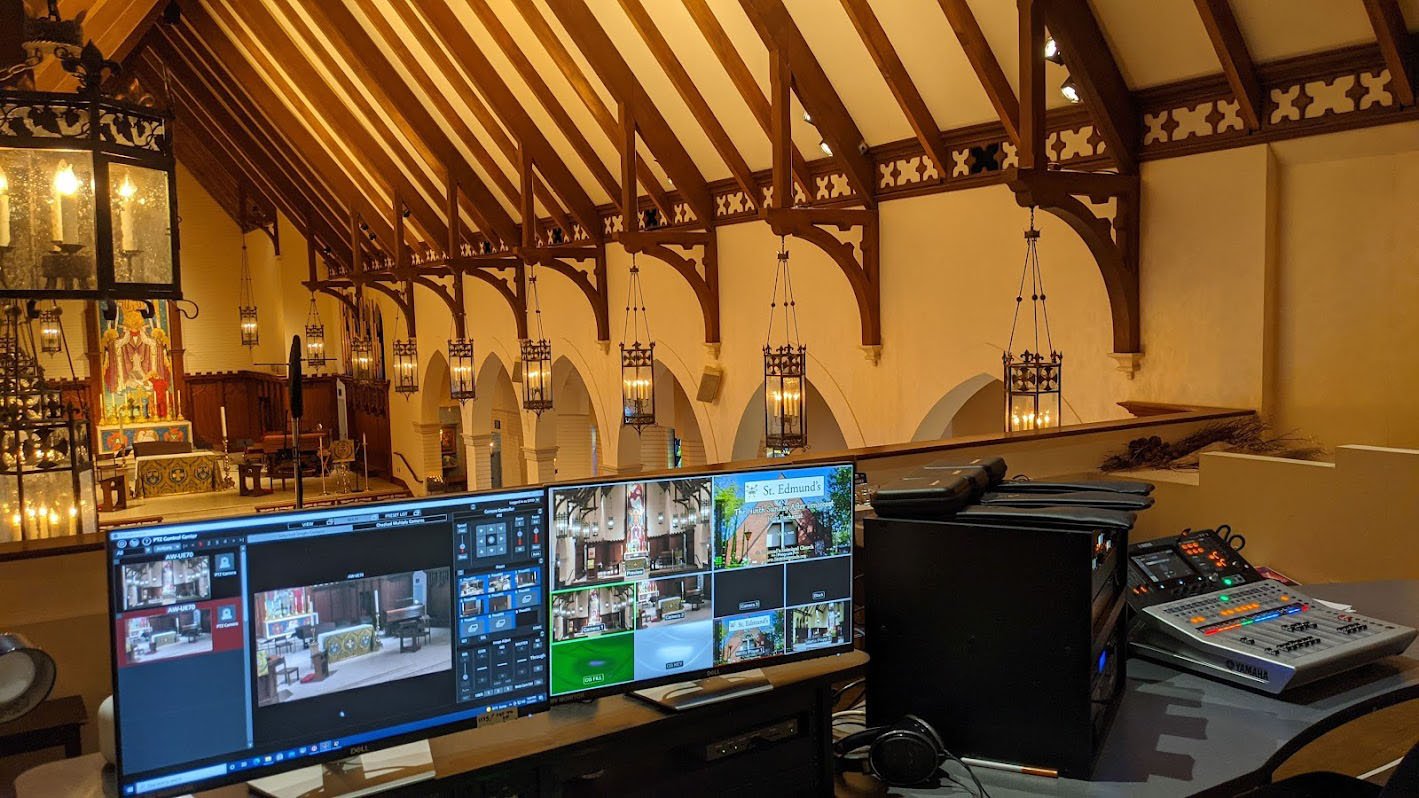 Modern technology is at home in the historic sanctuary of St. Edmunds Church in San Marino, CA, where a Diversity Fin Antenna and a DISTRO4 antenna distribution amplifier from RF Venue have solved wireless microphone system drop-out issues while opening additional spaces in the spacious sanctuary for wireless mic use

At the Colonel Bill Barber Marine Corps Memorial Park in Irvine, park amenities include three lighted softball fields, including one that seats up to 900 fans and is used regularly for regional tournaments. However, the wireless microphone used for pre-game rituals like player introductions and the National Anthem often experienced dropouts. Once again, Triton Technology Solutions looked to RF Venue for the solution. “We installed a Diversity Fin Antenna on the roof of the announcer’s box in time for last year’s season and covered it with a plastic hemisphere to protect it from the elements,” says Rose. “Now they can take the wireless Shure SLXD24 Series, SM58 wireless microphone we installed, virtually anywhere in the stadium, including out in centerfield, and never experience a dropout.”

Rose says he became a champion of RF Venue products after encountering them at a trade show several years ago. Since then, he says, “they’ve become my go-to supplier for antennas and wireless distribution. We use multiple brands of wireless microphone systems, and the RF Venue products work flawlessly with all of them. And the Diversity Fin Antenna is cross-polarized, so it works well in both horizontal and vertical directions, which gives us much more installation and location flexibility. When it comes to wireless, RF Venue is the only way to go.” 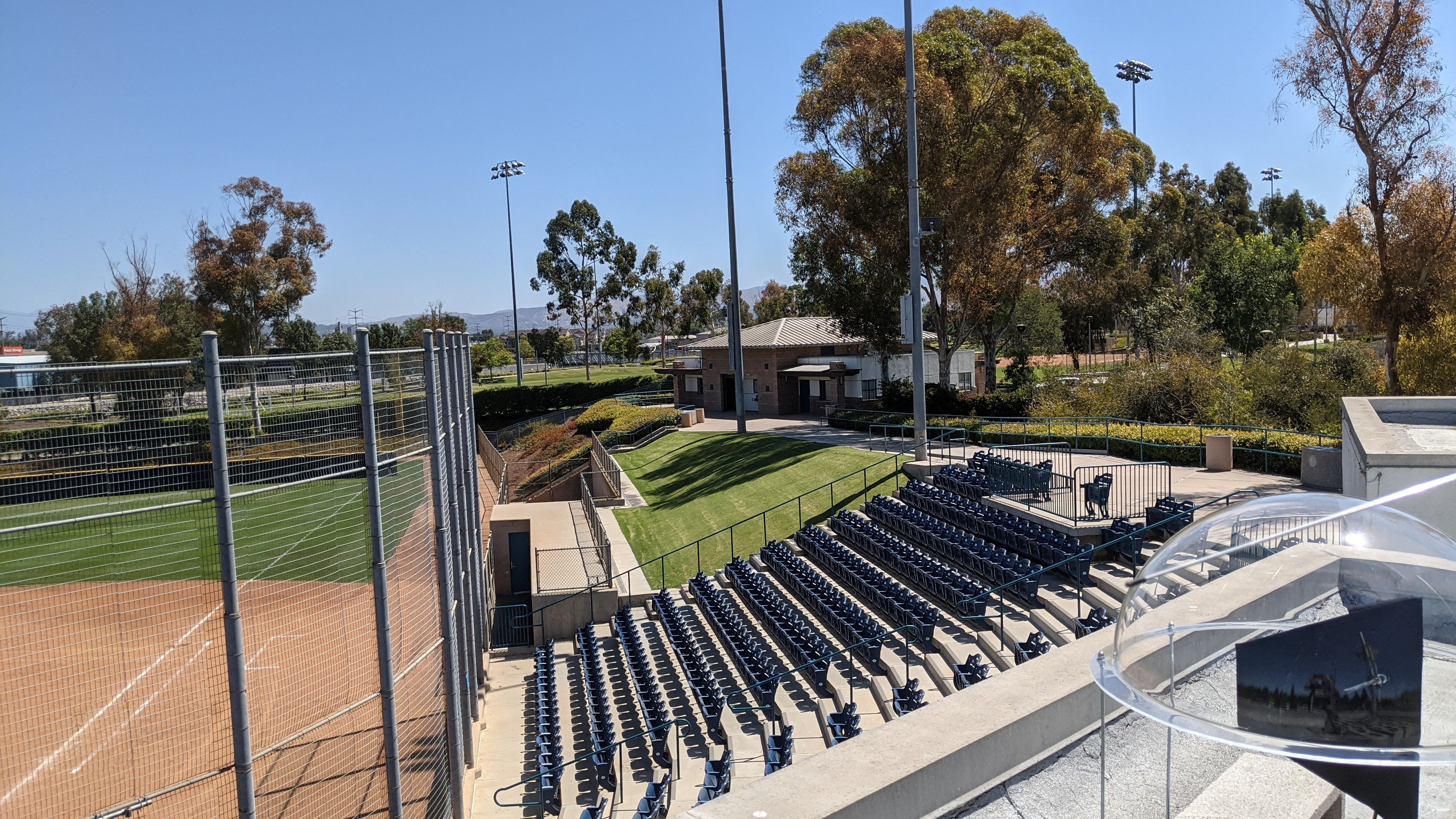 Wireless microphone dropouts are a thing of the past at the flagship softball field of the Colonel Bill Barber Marine Corps Memorial Park in Irvine, CA, thanks to an RF Venue Diversity Fin Antenna on the roof of the announcer’s box where it’s protected from weather with a plastic hemispheric shield (lower right corner of image)