Ashland, MA, USA, June 22, 2022 — The Church For All Nations in Colorado Springs, CO, had a problem. Actually, they had a multifaceted problem: its RF wireless microphone and IEM systems were experiencing regular dropouts and signal fades during services and even rehearsals. The RF products the church was employing, such as antennas and combiners, were not working effectively – or at all, in some instances – and the church’s own knowledge base was shaky on the complex topic of RF management. Luckily, a set of online resources from RF Venue got the church’s technical personnel on the right track, leading to a more knowledgeable staff and eventually an updated system of RF Venue components. 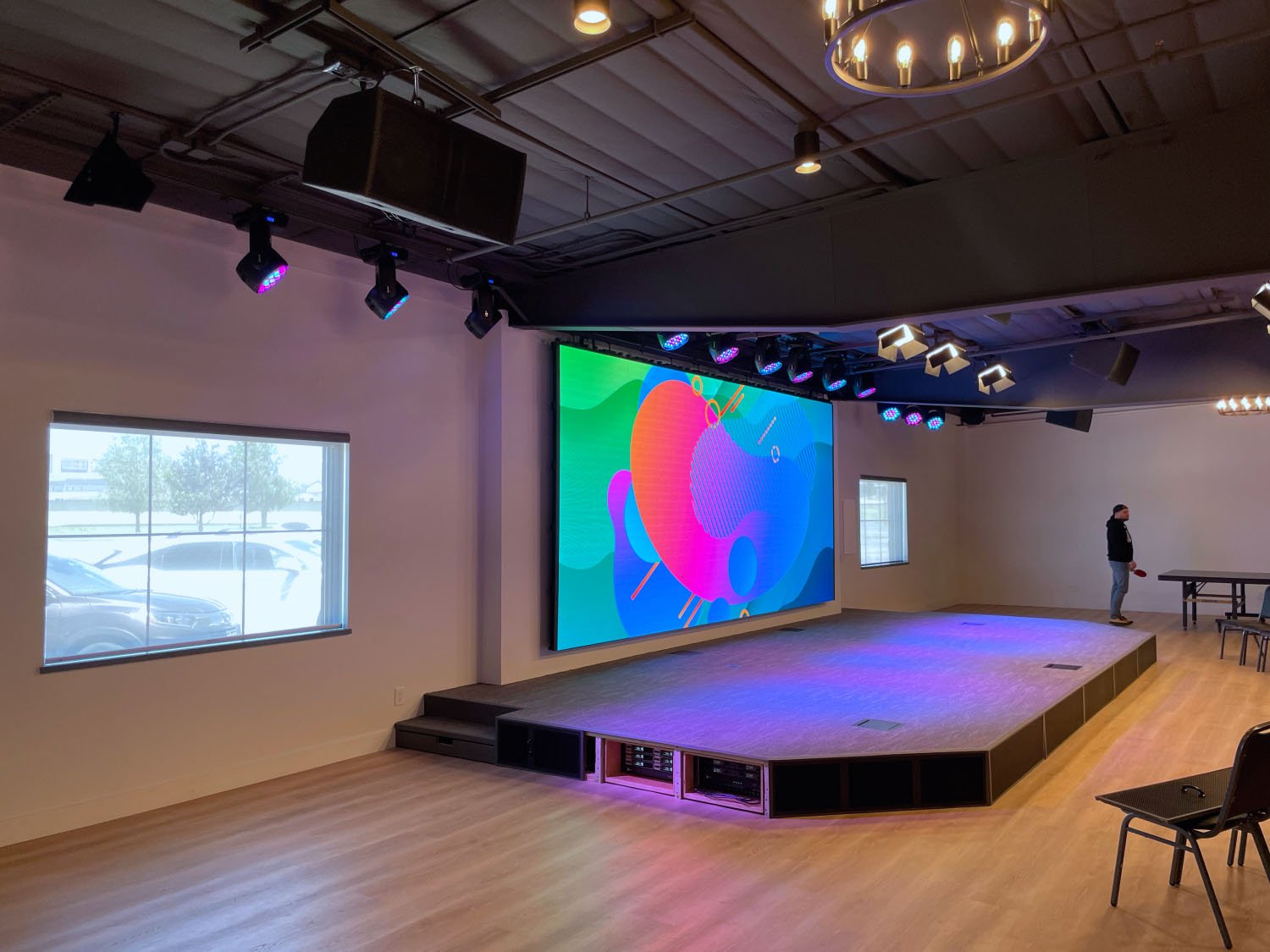 “RF has gotten progressively harder and harder to deal with in the last few years,” says David Cowart, an associate pastor at Church For All Nations and occasionally its sound mixer, a role he shares with several other staff there. Citing the loss of spectrum over the last decade-plus as the FCC has auctioned off frequencies in the key areas used by wireless microphones, Cowart found in that time that even many AV systems integrators, who were otherwise savvy and knowledgeable when it came to most audio and video systems, had significant gaps in their understanding of RF.

So the first step for Church For All Nations was finding information that could help explain the problems they were encountering. As it turned out, RF Venue’s website is a wealth of exactly that: The 5-Minute RF Expert Training Video Series, in which RF Venue Senior Applications Engineer Don Boomer examines various wireless problems and the products and techniques that solve them; along with other knowledge and product resources shared by the company.

“Those tutorials and other resources were invaluable,” says Cowart. “Only RF Venue has been able to explain the concepts and the challenges around RF in such an understandable and comprehensive way. Before, we had no frame of reference to compare the amount of money we’d spend and the results we’d get when it came to RF. And other information we were finding basically said just spend more money, which didn’t seem like an adequate approach for us. The RF Venue presentations guided us in a different direction. They put their information out in ways we could absorb it, rather than our having to scroll through lengthy and very technical papers. And we reached out to Adam [Brass, RF Venue Sales Director] with specific questions, which he took the time to respond to in ways that were very useful to us. So just starting off, RF Venue was a great discovery.” 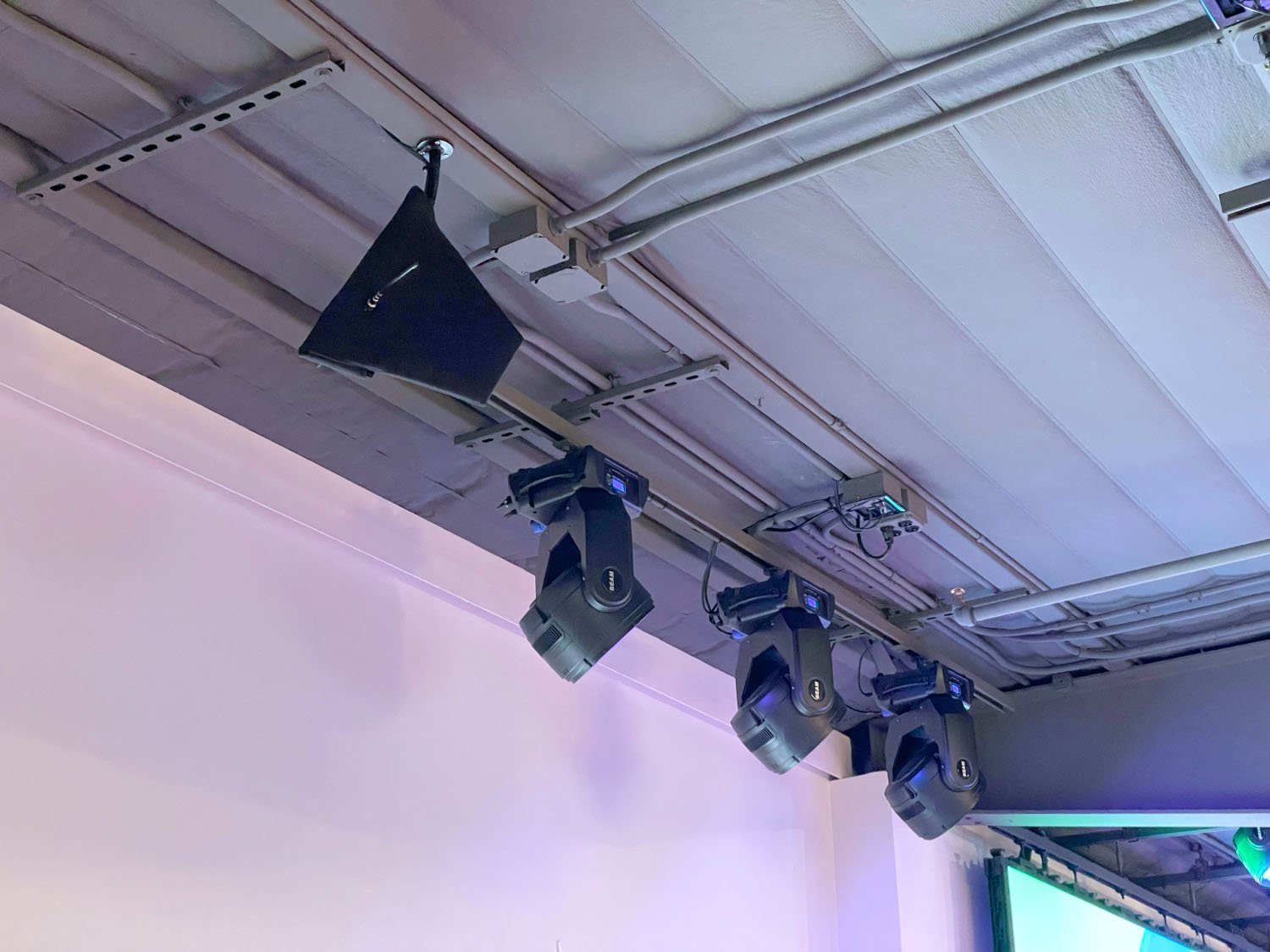 Then came the products. Church For All Nations needed improved RF management in its main worship sanctuary and for The Gathering Room, a separate hall used for youth services and other events, and where RF was also a problem. Citing the knowledge gleaned from RF Venue’s tutorials and other material, the church first addressed the problems plaguing its wireless IEM systems by investing in two COMBINE 4 antenna combiners with CP Beam Antennas, one for each space. In both cases the combiners and antennas delivered immediate performance solutions upon installation by the church’s media team. As The Gathering Room’s wireless gear is mounted below the stage, Cowart mounted an RF Venue Diversity Fin antenna on the backside of the stage on the ceiling to achieve a clear RF line of sight for the wireless microphones in use. RF Venue’s premium RG8X cable was used for the antenna run to an RF Venue DISTRO9 HDR antenna distribution system and from the DISTRO9 to the wireless mic receivers.

The renovated Gathering Room space also includes a new sound system, an 18ft x 11ft tall LED video wall, and moving light fixtures, the last two of which can create significant interference with wireless RF microphones. “RF Venue taught us how to avoid that kind of interference, so we’re getting the most out of our investments,” he says. “They also showed us how 5G can affect us in the future, so we can prepare for it, and even how our security team radios, which are in the 470-MHz range, were being affected by RF interference. It’s not just about the wireless microphones and IEMs anymore — it’s about everything that RF affects and that affects RF. RF Venue knows that stuff, and now we do, too.” 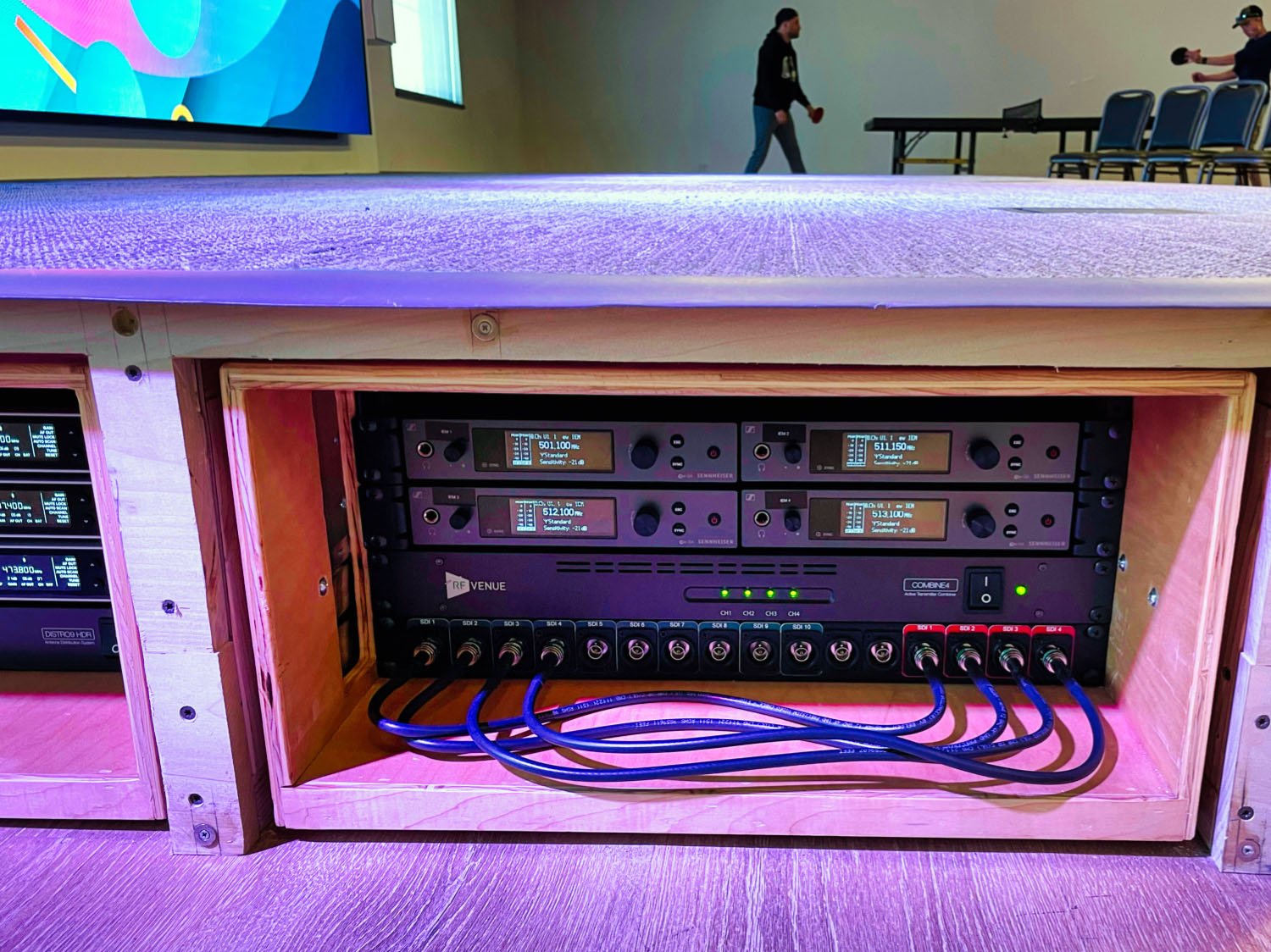