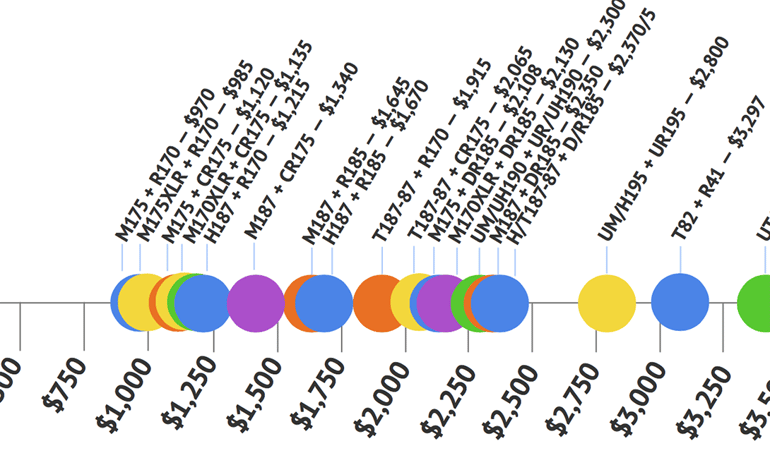 We spent a few hours at the Audio History Library & Museum and gathered a total of 11 publicly available retail price-lists from five manufacturers, and plotted the prices for the most common packaged systems and configurations on the graph below.

These plots should be thought of as visualizations of historical curiosities, from which we can make crude inferences, rather than a deep-reaching analysis.

For a deep analysis we would need price-lists from all manufacturers (we only have a few) across many different years, as well as degrees in statistics.

Although the collection at the Audio History Library & Museum is more comprehensive than anywhere, the best we were able to gather was a stack of snapshots of some manufacturers’ price-lists from certain years. In some cases, we got lucky, and found two price-lists from two manufacturers from the same year.

Furthermore, we did not plot every single model because frequently the difference in price between one model and the next is due to differences in form factor and microphone capsules (custom colors, headworn vs. lav, etc), rather than radio features. We’re much more interested in understanding how pricing relates to the latter than the former.

Here’s the visualization. If you’re on a mobile device, you should be able to turn the device to landscape orientation to read all of the juicy details.

We're working on getting comments installed on Audio Gloss, hopefully by today, but in the meantime feel free to email me with your thoughts, and I will add them below.

The earliest use of UHF band frequencies we found in our limited sample of 11 price-lists was in 1994 by Lectrosonics, in their UM, UH, UT, and UR lines. Some other manufacturer may have used UHF earlier than 1994, but we don't have a large enough record to say for sure.

In the early days, the 70s and 80s, many models came with a single (that is, one) pre-tuned frequency. A few came with a small number of fixed frequencies. Manual tuning in 25 kHz increments didn’t arrive until later.

Sabine wireless broke the broadcast band mold by offering mics in the 2.4 GHz ISM band, which was originally billed in 2001 as offering “Virtually no RF interference and increased range” and “Up to 50 simultaneous systems.” Now, microphones that operate unlicensed in non broadcast band spectrum are common, like 900 MHz, 1.9 GHz (DECT), and even 5.8 GHz.

Microphones with truly digital modulation have only arrived in the last few years.

When you consider inflation, pricing overall has gone down, not up, and the spread between upmarket and downmarket has widened.

That makes sense for a few reasons.

Before the mid to late nineties, all microphones used VHF frequencies. VHF has larger wavelengths, which translate to larger electronic components and antenna sizes.

Today, a lot of a UHF radio’s circuitry can be collapsed into a relatively affordable and “off-the-shelf” integrated circuit, especially when bought at scale.

Which brings me to scale: economies of them. There are more wireless microphones rolling off manufacturing floors today than there were in 1973. How many more? That’s difficult to say. But we do know that the more units of a product are produced, generally, the cheaper that product gets. And if you offshore some of your manufacturing, as almost all of these companies do to one degree or another, costs go down as well.

It’s also interesting to see, in those cases where we have more than one price-list for the same manufacturer, manufacturers scampering upmarket and downmarket, possibly as an internal strategy, or even in response to other entrants and offerings from other manufacturers.

In 1991, for example, Lectrosonics offered an “Economy Series” with a base model costing only $399. Since then, they have firmly stepped away from “Economy” wireless and staked out a powerful and well-deserved brand as a manufacturer of premier, rugged, and great sounding wireless used in film and TV.

Sennheiser also staked out a valid claim as a manufacturer of top-quality wireless. In fact, their 1999 line is so expensive it forced me to break my scaling! No other commercially produced mic in our survey ever sold above $5K/channel, besides Sennheiser, which has three of them. The SK250-UHF + EM1046RX-UHF combination rings in at an opera-glass shattering $9,725 per channel. I say opera-glass shattering specifically because you are unlikely to find this model outside of a major theater or concert hall.

The high end wireless market is alive and well today, with the Shure Axient series, Sennheiser 9000, and Wisycom lines.

But with economies of scale and increased demand in the middle range, a healthy market for wireless in the sub $1000 per channel range has emerged, providing products that are high quality and affordable for the vast majority of the market, like the Sennheiser EW series, and Shure ULX and SLX series.

There will always be high-end products in broadcast, major rental companies, theater, and film, who will spend five or six figures on a single system, but it's those 8-12 channel systems that we see so often that are coming in under $10K that contribute to the overall growth of the middle range/downmarket category and, I suspect, the growth of wireless microphone sales overall.

It’s also likely that the 2010 Report and Order that legalized unlicensed wireless microphones under Part 15 rules loosened the collars of many manufacturers and gave them the confidence to really step on the gas to start manufacturing unlicensed UHF microphones in large quantities and targeting price-sensitive markets, as evidenced by Shure’s <$1K/ch heavy portfolio in 2011.

Thoughts on Packaged Systems vs. Configurations

A single channel of wireless audio requires a transmitter, a receiver, and a microphone, which are between two and three physically separate objects.

This presents a challenge to the marketing department, and you see over the course of time different companies deal with this challenge in different ways, and in some cases parlay it to their advantage.

In the 70s and 80s, it was more common for a system consisting of a transmitter, receiver, and microphone capsule to be wrapped up in a package and given a noun for a name, in a singular case. Like, “The Presenter” or, “The Professional.” It’s much easier on the user. They can remember what the thing (which is actually between two and three things) is called, first off. They don’t have to worry about customizing anything, or whether their transmitter will work with their receiver. It’s plug and play. (The last we saw of those types of names was from Shure in 1997, after which time they start to exclusively use adaptions of model numbers and SKUs as product names, even if a string of letters and numbers represents a traditional packaged system.)

But also, one size fits all.

From the very beginning manufacturers offered transmitters and receivers, and sometimes capsules, separately, meant to be mixed and matched in a modular way by the user according to need.

The modular approach requires the end-user to be more technically advanced, and have a good memory for tongue-twisting model names. This seems to be a good upmarket strategy where users are more advanced and know exactly what they need, and might even loosen some screws and fire up the soldering iron to hack and fix stuff themselves. Lectrosonics entire line and Sennheiser’s 3000 and 5000 series fit this mold.

Lower priced systems tend to be more complete. They are plenty of different options, but those options are variations on "kits," special handheld colors and finishes, one mic capsule over another, or form factor differences, rather than differences in radio components. It’s a great way to create up-sellable options while still retaining the budget-minded base model in price sensitive markets, and without having to invest any significant engineering costs. (It should be said that this practice is not exclusive to downmarket models, as the UHF-R line makes clear)