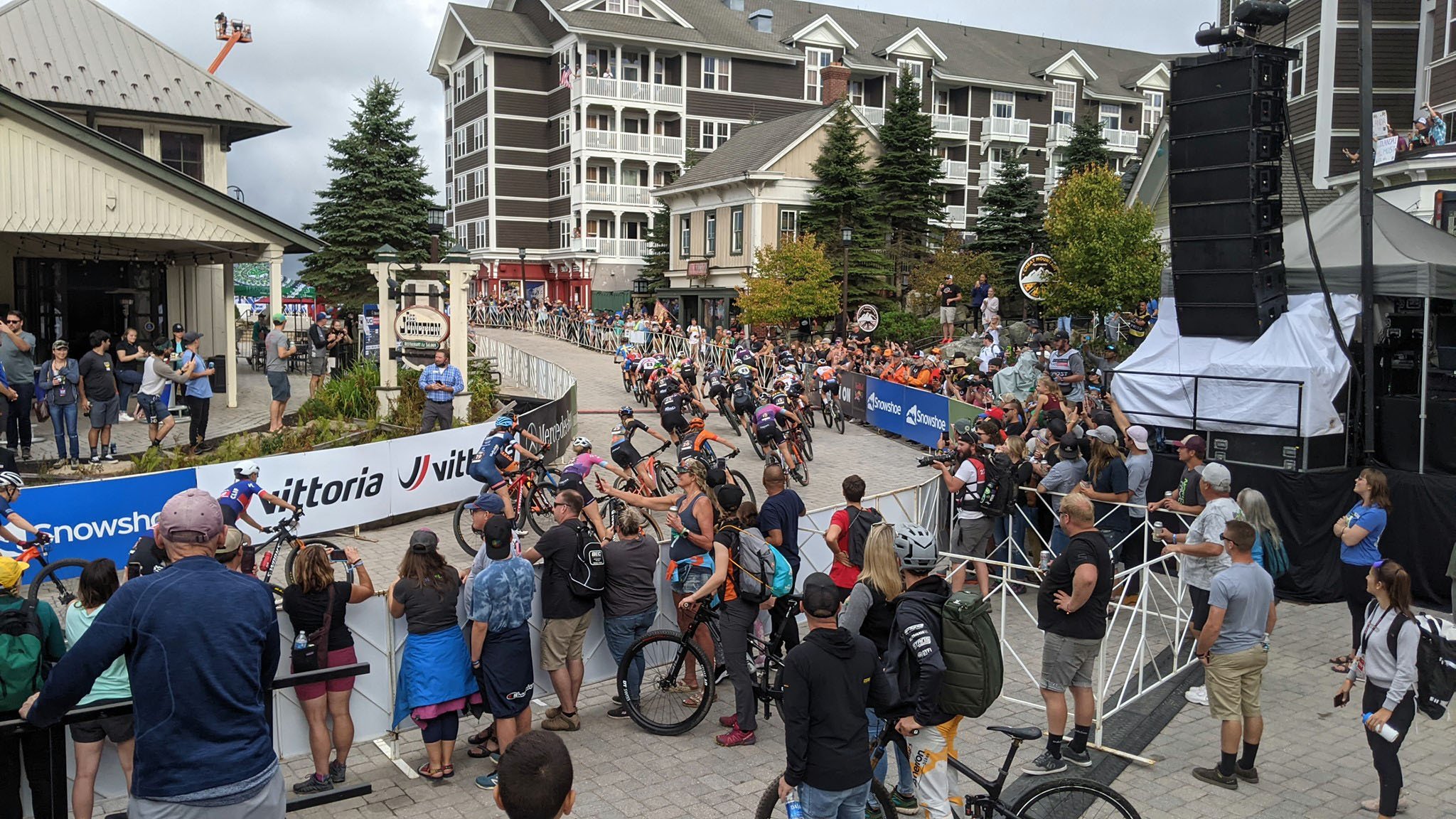 Ashland, MA, USA, August 31, 2022 — The focus of the mountain biking world was once again on the Snowshoe Mountain Resort as it played host to the Mercedes-Benz UCI Mountain Bike World Cup event, July 29-31. Encompassing downhill, cross country, and short track racing, this internationally viewed series of races, broadcast over Apple+ and Red Bull streaming networks, among other outlets, takes place in Snowshoe, West Virginia, in the Allegheny Mountains. But getting the audio for this sprawling event, which includes announcers threading the race courses and music stages at the start and finish lines, everywhere it needs to go is a Herculean task. While a massive fiber network took care of most of that, there were several critical areas that required coverage where the fiber could not reach. Those were addressed with wireless audio systems using antenna solutions from RF Venue, a leading global manufacturer of antenna and RF communications wireless audio essentials.

“We had a number of zones we had to cover over the six square miles of mountain bike courses, and we mostly used the resort’s existing bundles of fiber to deploy our own isolated Dante network,” explains Austin Addair, Production Manager at Midway Production Services, which provided the audio and video systems deployed over the side of the mountain that included the music stages and announcer areas. The PA system was designed with carefully positioned delay speakers to provide audio synched with the various large-screen video walls that allowed onlookers in most places to view and hear the action from other parts of the mountain as though they were right there. But there were areas where the fiber just wasn’t the right solution. One of those was for the announcers at the starting line for the cross-country race, where running a cable would have been restrictive. Instead, Midway Production Services deployed an RF Venue Diversity Fin Antenna with a Shure ULX-D wireless microphone system. “This was a pretty traditional setup, of a wireless microphone transmitter to a receiver, but the distances and movement had to be considered,” says Addair. “The announcer would be roaming the area, so we had to make sure we maintained constant connectivity. RF Venue’s D-Fin antenna made sure we did.”

A number of JBL delay speakers were deployed upwards from the stage, using the fiber network to distribute a mix of local and mountain-wide audio. A problematic area was at the finish line of the downhill race, where the audio from the Stageline SL100 mobile music and announcements stage had to reach back up the hill to a particularly remote delay speaker on the other side of the racecourse. Using a cabled solution would have required having cables crisscross the track several times. Instead, they used a combination of a Sennheiser ew 300 IEM G3 in-ear monitor transmitter and a high-gain RF Venue CP Beam helical antenna transmitting from the PA system at the stage to a Diversity Fin antenna connected to a Sennheiser ew 300 IEM G3 receiver that fed the delay speaker. “We were able to reach as far as over 500 feet using this arrangement,” says Addair, noting that this trick has been a lifesaver in other challenging wireless situations. “It’s something we’ve used before and the CP Beam antenna reliably gets us well past 500 feet this way.” 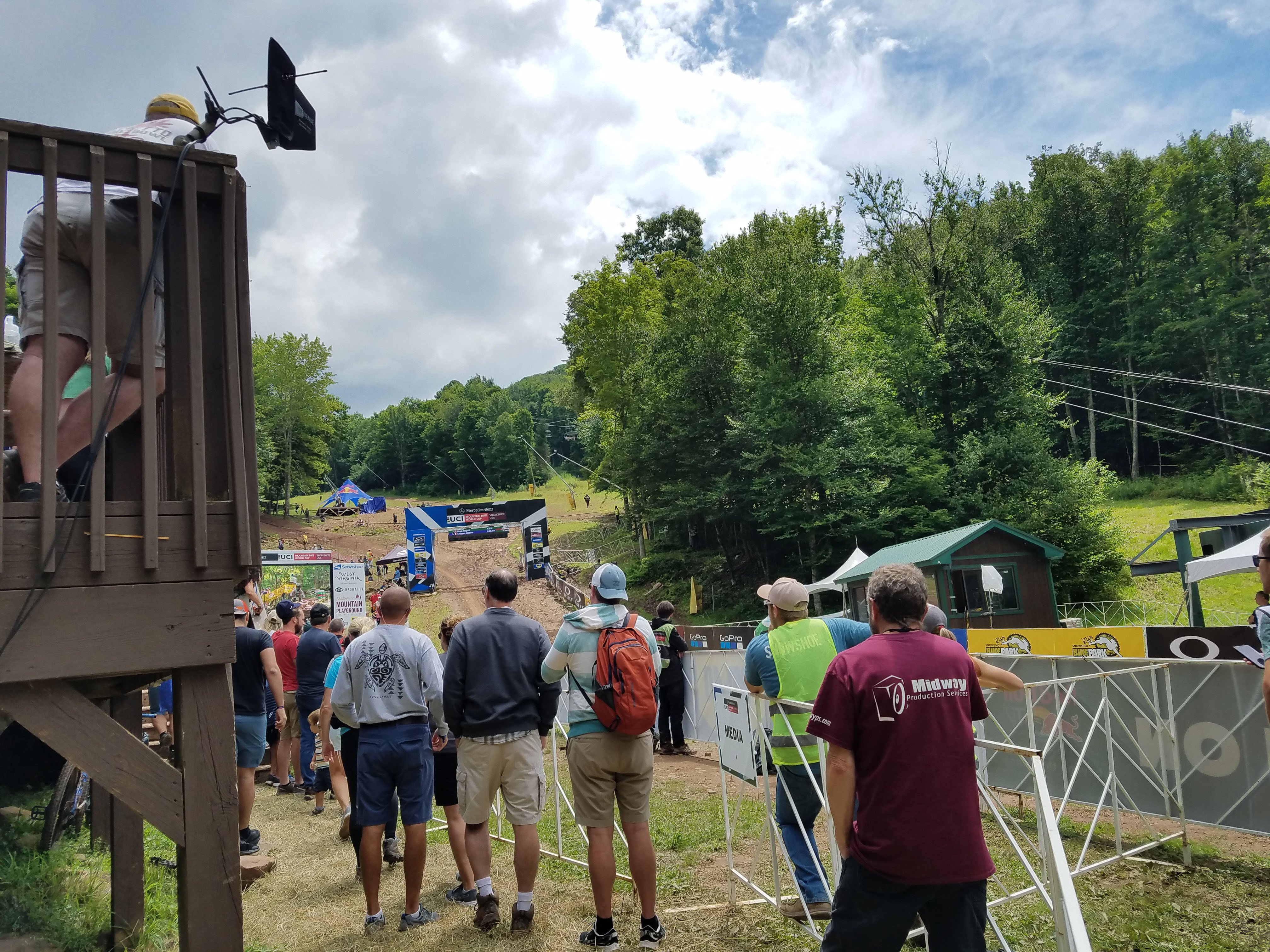 The Mercedes-Benz UCI Mountain Bike World Cup event is unique in a number of ways, not least of all for wireless operations. While the event takes place within the exclusion zone of the Greenbank radio astronomy observatory — putting it in one of the least-dense RF environments on earth — the races take place as thousands of spectators, racers, and others roam the area, creating their own RF challenges. “The bandwidth here is great, but you never know how the crowds and other things at the event can affect that,” says Addair. “That’s why we use the RF Venue gear. It’s as good as it gets and we know that if we use it and follow best practices, nothing is going to go wrong.”