With as many as 1,000 people onstage and 40 channels of wireless microphones, Prestonwood Baptist Church celebrates the year’s major holidays with massive productions with many moving parts all taking place in a highly challenging RF environment. RF Venue’s RF Spotlight™ antennas, a 4 ZONE™ active antenna combiner and a DISTRO4™ Antenna Distribution System were able to tame the church’s RF challenges 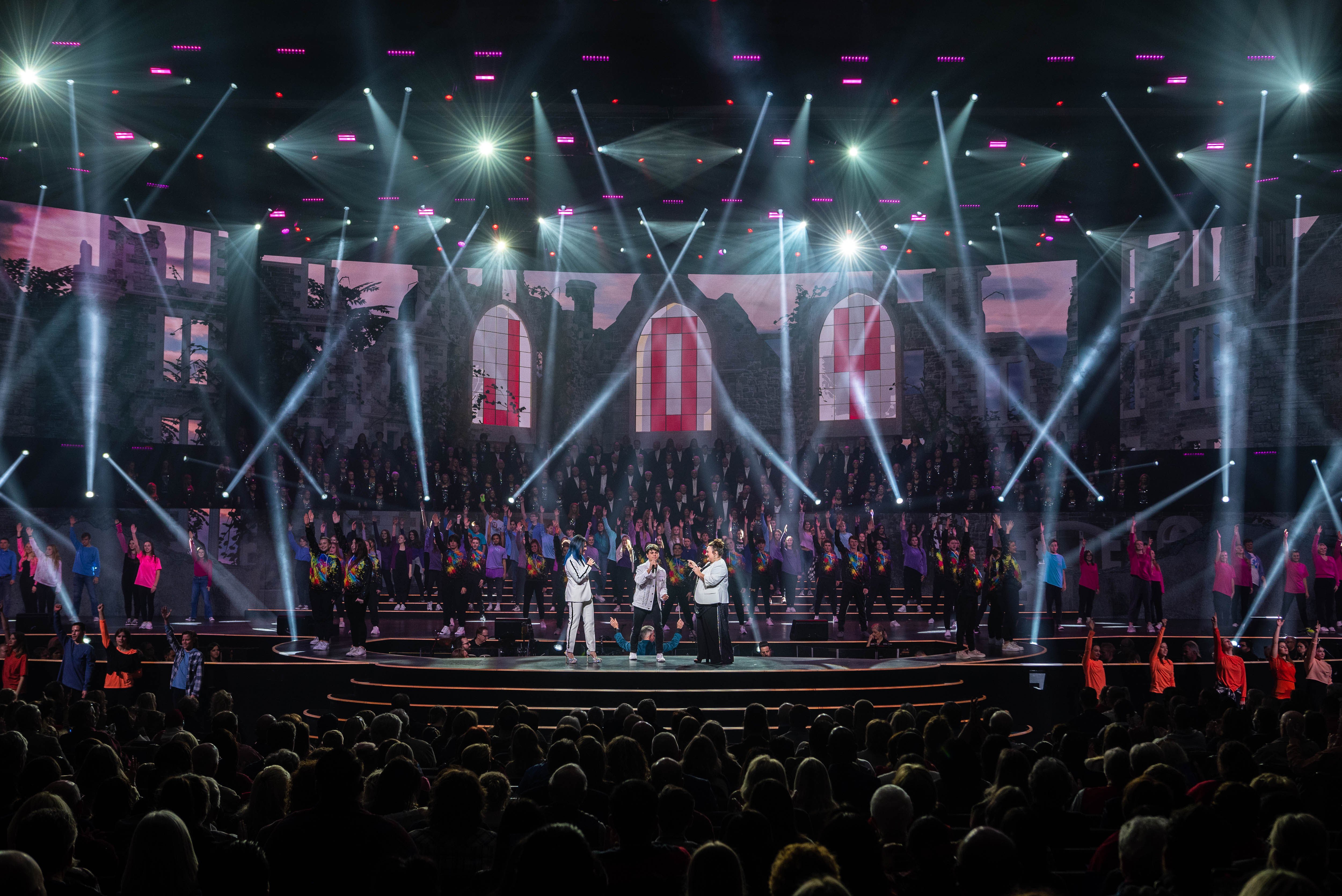 Ashland, MA, USA, June 1, 2022 — Prestonwood Baptist Church’s main location in Plano, Texas, is an enormous facility that hosts 8,000 to 10,000 worshipers each weekend. The productions can match the scale of the attendance, with no detail overlooked – especially on the year’s major festival days, Easter and Christmas. The Gift of Christmas, the church’s annual seasonal production, is a visually stunning multimedia event complete with special effects, a nearly 1,000-member cast and choir, a live 50-piece orchestra, Cirque du Soleil-style aerialists, and eye-popping virtual scenery on LED video walls bringing the Christmas story to life in a breathtaking way. Award-winning lighting and a bold scenic design give a unique look that inspires and engages the congregation. But as many churches and other large-scale facilities find, it can be hard to implement the right solutions in a typically challenging RF environment, and Prestonwood Baptist is no exception. Fortunately, RF Venue components offer a rock-solid and reliable wireless infrastructure for the space, eliminating dropouts even for the most complex of worship programs.

The challenges presented by the RF environment near the Plano church building aren’t small: its 7,000-seat auditorium have an unimpeded line of sight to television and radio transmission towers 40 miles to the west and are even closer to the Dallas-Fort Worth Airport’s massive antenna farm, barely 10 miles away in the same direction. The area also has over a dozen DTV stations of varying power levels on the air (one of which, TV 17, had been dormant but popped up suddenly just before last Christmas’ production began). Then there are the corrugated metal elements in the roof and other parts of the building’s construction, which can interfere with RF propagation.

For the year’s biggest holiday events, the stage is expanded to form a larger production area than used on a typical Sunday. For The Gift of Christmas in 2021, for example, it measured over 120 feet across, with a second stage added. “If you were to list the top ten challenges wireless microphones have to face for a theatrical or musical production, most them would be right here,” says Ryan Sartell, the RF specialist that has managed the production’s wireless microphones for the past five years. “The production takes place in a massive space, the ceiling curves left to right and front to back, and the corrugated metal means the multipath in the room is extremely aggressive. Plus, two 12-foot video screens also put a lot of RF into the environment. Previously, we’d used some helical antennas, but things would just dance across them. We’d have regular dropouts. Sometimes we’d have to turn the gain up on the transmitters under the costumes, but that comes with its own problems. There came a point of consensus: we needed a better RF solution.”

That solution came last year, leading up to the major Christmas event, in the form of six RF Venue Spotlight antennas, four of which were positioned equidistant 30 feet apart behind the orchestra on stage, and two more placed near the end of the stage thrust built for the production. The Spotlight antennas were linked using an RF Venue 4 ZONE active antenna combiner placed in the stage-right equipment area used to house the wireless-microphone receivers. The RF Venue solution became the pathways for reception of the 40 channels of Shure ADX1M micro bodypack wireless microphone transmitters used during the production. “The Spotlight antennas gave us much more latitude in terms of placement of RF antennas, which was critical for a complex show like this, and as a result there was less distance between the antennas and the transmitter on stage, allowing them to use the Micro transmitters, which are much smaller and really help with costumes and makeup,” he explains. 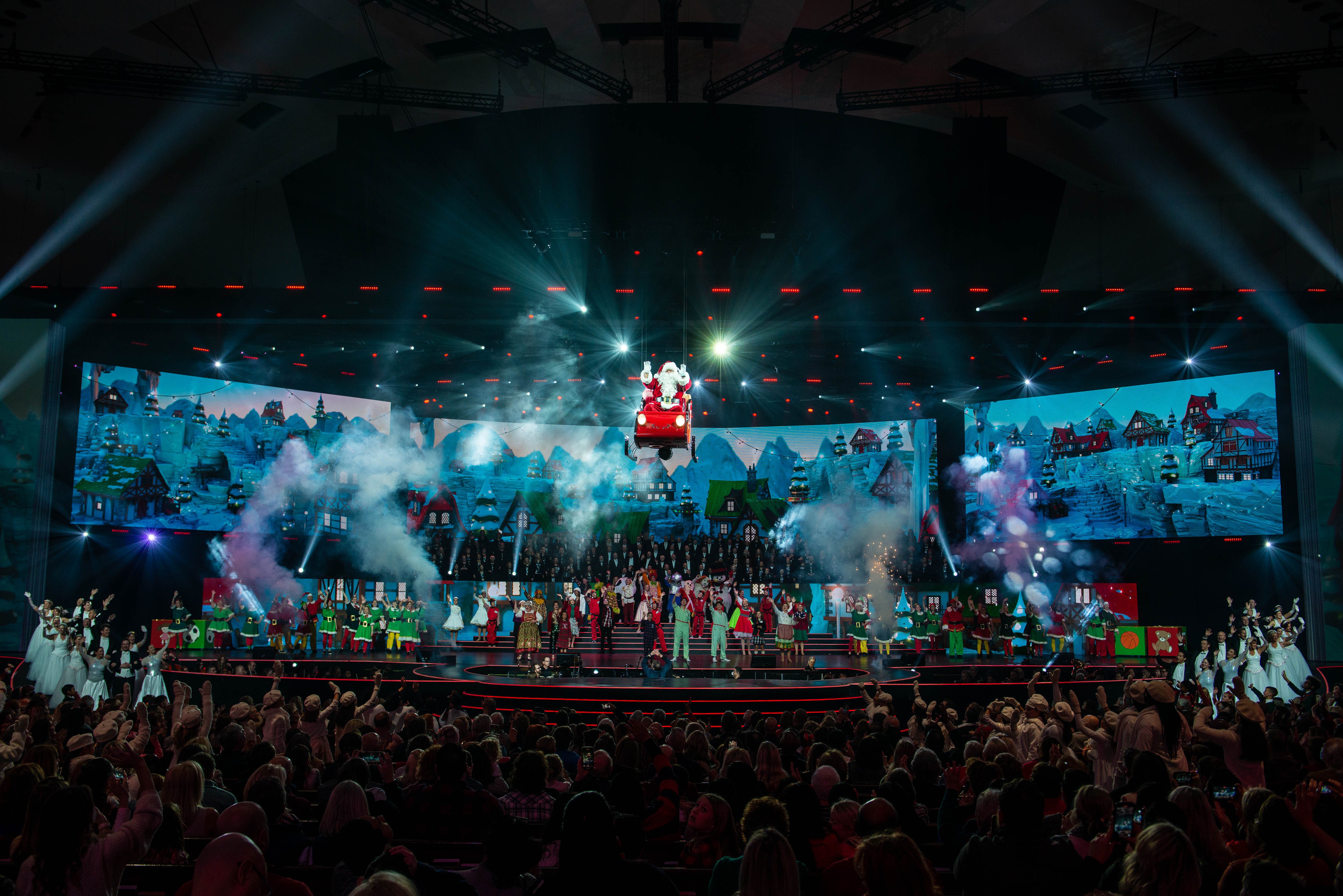 The finale of Prestonwood Baptist Church’s annual multimedia event The Gift of Christmas illustrates the scale of the production. Across an expansive stage and in a difficult RF environment, consistent wireless microphone system performance is provided by RF Venue antenna, combiner and distribution solutions.

What the new RF Venue antennas and combiner have offered on the operational side for the church has been no less than a true game changer. “I now no longer have to worry about wireless,” says Mike Smith, Lead Audio Engineer and Live Production Lead for Prestonwood Baptist Church, who mixes front of house for services as well as the seasonal productions. “For the Christmas production, there were some 70,000 seats sold over two weeks, so the pressure to make it perfect is there. You do not want dropouts, which had been a problem in the past.” Smith says that he and Sartell will work together for next year’s event, looking to fine-tune antenna placements even further. “Because of the extensive staging, once you place an antenna it’s not easy to go back and reposition it, so we’ll learn from this year’s experience,” he says. “But the improvement we had this year because of the RF Venue antennas was very real and very welcome.”

The expansive sanctuary at Prestonwood Baptist Church hosts nearly 17,000 worshippers each Sunday and is home to major multimedia events where scores of wireless microphones operate seamlessly and dropout-free thanks to RF Venue antenna, combiner and distribution solutions

“The RF Venue gear took a rough RF environment and smoothed out its inconsistencies,” Sartell sums up. In addition to how the RF Venue technology helped make the annual Christmas spectacular’s sound as flawless as it was, Easter 2022 was another success, with a setup including two Spotlight antennas under the pulpit and integrated with the 4 ZONE active antenna combiner supporting another huge (yet less massive than Christmas) production. And a pair of Spotlight antennas and a DISTRO4 Antenna Distribution System are permanently in place in the church’s student building. “Coverage for RF is no longer a concern anywhere here now.”