We know a thing or two about how wireless headsets used by the NFL work. We also actually know the technicians who are responsible for operating wireless intercoms (as they are more formally known) and other equipment during NFL games.

And we gave these people a call—though none would speak on the record, we got to the bottom of what actually happened last night.

Based on the evidence we’ve gathered, we are almost positive that the radio broadcast signal from the Patriot’s Official radio station, “The Sports Hub” on 98.5 MHz, heard in Steelers’ headsets, was caused by an unintentional electrical malfunction, rather than deliberate sabotage.

[Thoughts? Scroll down all the way to the bottom for Disqus comments.]

Let’s first debunk why it is almost impossible for the Patriots to have intentionally interfered with the Steelers’ on-field intercom system by signal jamming using airborne radio waves.

So, what really happened?

The NFL official statement is this:

”In the first quarter of tonight’s game, the Pittsburgh coaches experienced interference in their headsets caused by a stadium power infrastructure issue, which was exacerbated by the inclement weather… The coaches’ communications equipment, including the headsets, is provided by the NFL for both clubs use on game day. Once the power issue was addressed, the equipment functioned properly with no additional issues.”

The NFL’s statement is correct.

A poorly grounded audio or power cable in the wired portion of the intercom system that lives in the coaches' booth, and connects to the wireless cart on the field, acted as an antenna (anything made from metal can be an antenna), and picked up The Sports Hub radio network. The Sports Hub has its own transmitter inside Gillette stadium, so the received power levels are unusually high. The shielding on a poorly grounded cable received the Sports Hub radio wave signal, and introduced it into the audio circuit in one of many different places—we don’t know exactly where (the coaches' booth is a best guess). It is much more likely that this is the explanation if the Sports Hub broadcast inside Gillette Stadium is AM instead of FM.

The Steelers reported “intermittent” interference most likely because at the time of the game it was raining, and rain easily compounds grounding problems and makes them less predictable.

As to their report that the interference "strangely" disappeared once they walked over to the Patriots' sideline to confront, that could very well be a coincidence, or the emotions of the person working for the Steeler's who wrote the report getting in the way of an objective view of the situation.

The wired intercom system is connected to a number of different systems. There are hundreds, possibly thousands of possible roads of ingress for the interfering signal—mixing consoles, jacks, comm controllers—and a plugged or wired cable carrying the Sports Hub signal could have accidentally been introduced at any of these, though tracking down which one is almost impossible.

Back to the NFL’s statement. When we hear the word “infrastructure,” we think of large buildings, high voltage power lines, and lightning rods.

That is not the type of infrastructure the NFL is referring to. What they mean by “infrastructure” is the complex, low-voltage communications system, and its many power supplies, that is set up at each and every NFL stadium to provide coaches and players with secure, reliable communications, both wireless and wired.

Let’s talk about the building blocks of every NFL stadium’s intercom system, which few seem to understand.

The NFL and its corporate sponsors, primarily Bose and Microsoft, provide the hardware and other equipment necessary to maintain communications for both systems.

Bose and Microsoft have almost nothing to do with on and off-field communications. Bose simply supplies the noise-canceling headsets (the microphone and headphone) that plug into the radio transceivers, and Microsoft, as far as we can tell, pays to supply the branded carts that the intercom systems ride inside, and nothing else.

These carts sit on the sidelines of both home and away teams and are filled with “intercom base-stations”: the devices that receive and retransmit wireless signals received from radio intercom transceivers worn by coaches and built into player helmets.

These Telex systems are so special they have a special name known only to those who use them: “Lombardi Systems,” and if you have ever watched professional football, you’ve seen them with your own eyes.

We’re not stupid enough to put up a screen grab of NFL network footage showing one of these carts, but luckily, we have in our archives a photograph of a cart taken by Jeff Watson that contained a newer type of intercom system, the RAD UV-1G, that was used for portions of the Super Bowl and Pro Bowl. 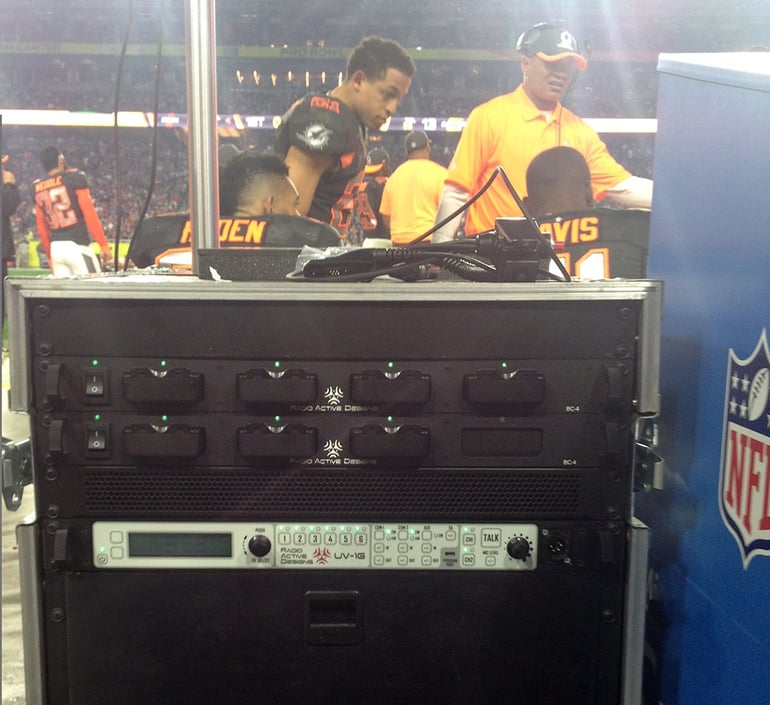 These carts are prime real estate and appear in multiple camera shots, so they are covered in the corporate marks of whatever company paid the most to place them there, but the guts (surprise!) aren’t filled with Microsoft Surface tablets. This is not a Lombardi System, but under ordinary circumstances, and at last night’s game at Gillette, it was.

Most of the mainstream media has focused on the wireless link between Lombardi cart and coaches + players. But Lombardi carts are connected (trunked) to wired intercoms running into the stadium and up to the coaches' booth. This allows coaches to communicate with coaches and players down on the field, and vice versa. They can push a button and talk to one person, or everyone.

The wireless infrastructure is essentially bulletproof to the type of interference the Steelers heard yesterday.

The wired infrastructure? Not so much.

Both coaches' booths are required to have at least six intercom jacks (where a headset can be plugged into). The booths are also outfitted with wired intercom main-stations (that route signal here and there and let a controller speak to one or many people on command). The jacks and main-stations are connected to dedicated power supplies, and the main-station is also connected to the NFL control booth.

More formally, these types of wired intercoms are known as “two-wire party lines.” [Edit, I'm unclear as to whether the NFL uses party-line only, or party-line/matrix hybrids, probably the latter.]

We have been told by anonymous sources that the electrical grounding procedures on all two-wire comms is dangerously out of date due to something called the Pin 1 Problem.

An audio or high quality power cable is usually shielded—an inner conductor carrying signal is covered in aluminum or copper that protects the conductor and signal from RFI (radio frequency interference).

The shield is always conducting ambient radio waves and turning them into electrical waveforms, but once the cable reaches the device, the RF energy that is in the shield is directed away from the audio circuit: that it is “electrically grounded.”

Unfortunately, on most of the wired intercom jacks and main-stations used by the NFL, modern grounding procedures (“infrastructure”) are not used, and occasionally cable shielding can conduct RF and make it into the audio stream.

The RF signal (in this case, The Sports Hub Signal) may have infiltrated the signal chain before the encryption or RF modulation stages in the transceivers on the Lombardi (which is quite secure from jamming).

It should be said the wired intercom system is connected to a number of different systems. There are hundreds, possibly thousands of possible roads of ingress for the interfering signal—mixing consoles, jacks, comm controllers—and a plugged or wired cable carrying the Sports Hub signal could have accidentally been introduced at any of these by a mistake of installation or human operator error—we're not just talking about accidental ingress and demodulation of an RF signal here anymore, an actual patch into a board or crossed wires are also somewhat possible.

Grounding on two-wire intercoms usually works OK, most of the time, but shabby installation, and rain, can make things worse.

To complicate matters, because the wired intercoms are party-lines, and they are connected to the Lombardis, there is no telling where, exactly, the interference is bleeding through, unless you tear down the system, cable by cable at every jack, main-station, base-station, and power supply.

What about that "almost"?

Earlier we said we were "almost" sure that the interference was accidental.

There are still a lot of people on twitter who think this is a conspiracy, so we’ll concede that it is possible that the Patriots were able to intentionally tamper with the Steelers' comm system and produce the type of interference observed. The home team is responsible for installing and maintaining the wired comms infrastructure, after all.

We aren’t going to explain how this would be done, because we don’t want to give out instructions on how to sabotage a comm system to all the naughty coaches out there reading this post. NFL style intercoms are used at high school and college stadiums across the country, too.

But we will say that, although theoretically possible, such tampering would require a lot of people, leave behind a lot obvious physical clues, and probably include an inside man or "mole" planted on the comm controllers or consoles of the Steelers.

In other words, even if you were able to get away with it for a game or two, it would never hold up to the scrutiny of a formal NFL review, which the Steelers, Patriots, and NFL all agree is not being pursued.

Less than 24 hours after the beginning of “HeadsetGate,” HeadsetGate is over.

For the time being, football fans will have to look elsewhere for evidence of the foul play that (maybe) explains the Patriots’ success.

Please address editorial and other enquiries to info@rfvenue.com