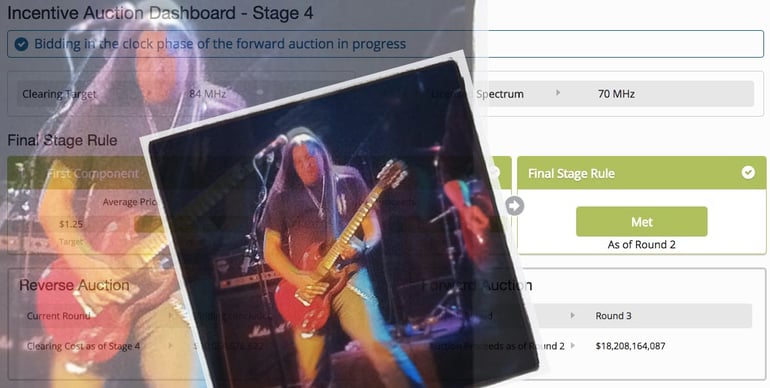 It has been almost eight months since the U.S. Incentive Auctions began. The bidding continues; it has not closed, yet. But we know with complete certainty this bumpy ride will end at at the current clearing target of 84 MHz, because the Auctions’ version of a litmus test, the Final Stage Rule, has been met.1

At long last, we have some certainty.

We know with 100% confidence (barring any ‘acts of God’) that the new UHF broadcast band and therefore UHF spectrum in which wireless audio devices are permitted to operate will be 470-608 MHz, a bandwidth of 138 MHz. The quantity of spectrum in the UHF band for wireless will, but not immediately, be reduced by up to 90 MHz from the previous band plan of 470-698 MHz—a reduction of nearly 40% considering neither regional repacked DTV band plan differences nor new rules for operation closer to or within DTV contours.

This is, tentatively, a good thing for wireless audio on a macro scale. (manufacturers, certainly, are breathing a sigh of relief, as they won't need to gut existing UHF lines and design, tool up, and secure supply chains for non-UHF radios) On a regional scale the density of repacked band plans varies. At least, this should not be any worse than the previous clearing targets.

However, the infamous TV Study software program still churns as I write.

After succesful completion, the FCC will reveal a detailed repack plan—a guidebook for where TV stations that decided to remain on the air or were forced out of eligibility as successive clearing targets shrunk in size are reassigned to new frequencies, and necessarily new coverage patterns that are supposed to approximate those licensee’s old patterns to the best of the FCC’s ability and authority. Since the Auctions began at the third most ambitious target, 126 MHz, and will end with a target significantly lower, 84 MHz, there are a larger number of TV stations to repack into the 138 MHz between 470-608 MHz which remains.

In other words, even though way less spectrum was sold off, we could end up with spectrum that is just as—or more—crowded than it was in the first place. I’m waiting on the word of technical analysts to give a concrete answer.

Soooo, yep. It’s possible that the new UHF + whitespace will be much, much larger than anyone anywhere expected, but as or more crowded.

During the fourth stage—which began before the election and will likely end after the inauguration—a mudslide of vicious politics tore the FCC apart.

Chairman Wheeler stepped down from his seat several weeks earlier than the traditional date in an attempt to secure confirmation of fellow Democratic Commissioner Jessica Rosenworcel, as Chair.

This was not some desperate “down with the ship” move by a sad defeated Wheeler and his party. Rather it was willful self-abdication in order to make absolutely sure Senate Republicans played fair by their own rules and past statements. Specifically, Mitch McConnell promised Harry Reid he would confirm Rosenworcel as 2017 Chair in 2014. Although I can find no direct source, Politico reports:

In Reid’s re-telling of the story, he had locked in an agreement in December 2014 with McConnell to move Rosenworcel’s re-nomination alongside a Republican FCC nominee, Mike O'Rielly.

McConnell circulated the cloture motion, maybe, who knows, and some of the other persnickety loop-de-loops a cloture requires, but then he and/or his personal army conveniently forgot to file it.

It was then that Wheeler threw himself in front of Trump’s armored victory bus to save the babe in the carriage.

This is such a large and convoluted tale, it deserves its own article. I will write this article within the next five business days.

And I promise those of you who are American citizens—no matter your opinion of our President Elect and by the time the article is written, President—I promise you, dear reader, you will weep.

Shred on, Kevin. Shred as if the bright sun tomorrow will not rise.