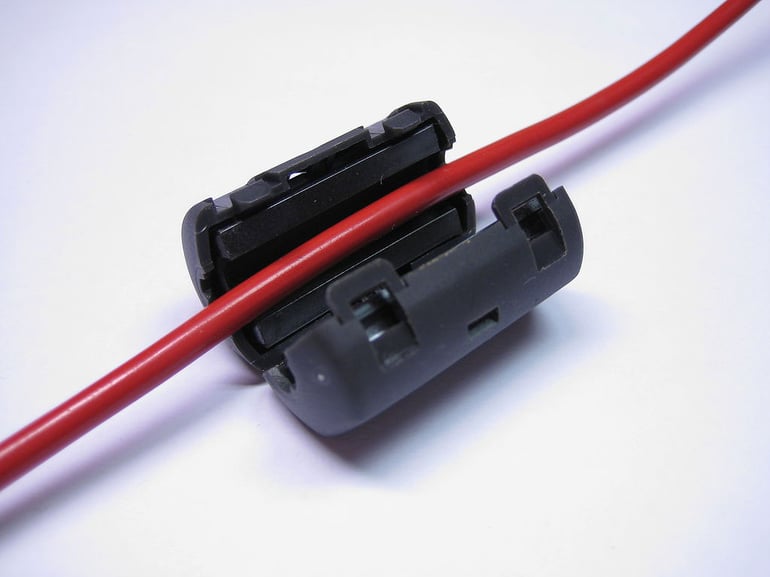 Yesterday I stated that blackberry buzz, or GSM buzz, doesn’t happen much anymore. Apparently, it does. Thanks to those who emailed.

GSM buzz is an audible interaction between some cellphones and nearby audio equipment. Dusting off my onomatopoeia skills, GSM sounds something like blip blip blip bzzzzzzz.

I’m going to approach this in reverse order. First, let’s discuss how to get rid of it. Then, for those still interested, where it comes from.

How to Prevent Cell Phones From Interfering With Audio Equipment

DUH, right? Well, it’s still the first line of defence against GSM buzz, which can’t happen if the cellphone’s transmitter is powered down.

Keep phones away from audio gear

Stages are carpeted in audio gear. The farther mobile phones are away from this equipment AND (very important) their cabling, the less likely they are to interfere. Most good engineers seem to impose an effective but draconian policy on talent: absolutely no cell phones anywhere on stage or off stage. All personal electronics are to be left in the green room, no exceptions, and all those in violation, famous or not, are chastised. Engineers everywhere would be wise to adopt similar policies.

If you cannot power down or remove cell phones, cannot control or predict whether phones will be near audio equipment, or just want an additional layer of security, a superb way to reduce or eliminate GSM interference is to add a ferrite core before a cable input. Ferrite cores, or beads, filter RFI (radio frequency interference) collected by a cable unintentionally acting as an antenna, while allowing audio signal to pass through. Here’s what a simple one looks like, courtesy "Omegatron": 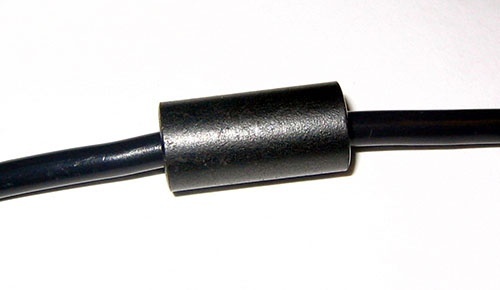 When it comes to GSM buzz, not just any ferrite core will do. You must use one that has the correct number of turns and is made from material optimized for attenuating high frequency GSM signal, which can be anywhere from 800 MHz to 1800 MHz.

The best chokes for pro audio are manufactured by Fair-Rite and snap around a cable. They should be placed at the input.

In the context of wireless audio devices (we'll talk about general XLR wired equipment next), GSM buzz seems to be more of a problem with mic and intercom belt packs. In some cases it may enter these devices via the cable connecting lavalier or headset to belt pack. The correct size for lav cabling can be purchased from Mouser as part No. 623-0461178181 . The smallest cable outer diameter that this core will fit is 4.3 mm, so, if your lav cable is thinner than that you’ll need to roll some gaff tape or place additional insulation around the cable at the location where the core is placed to ensure a snug fit. 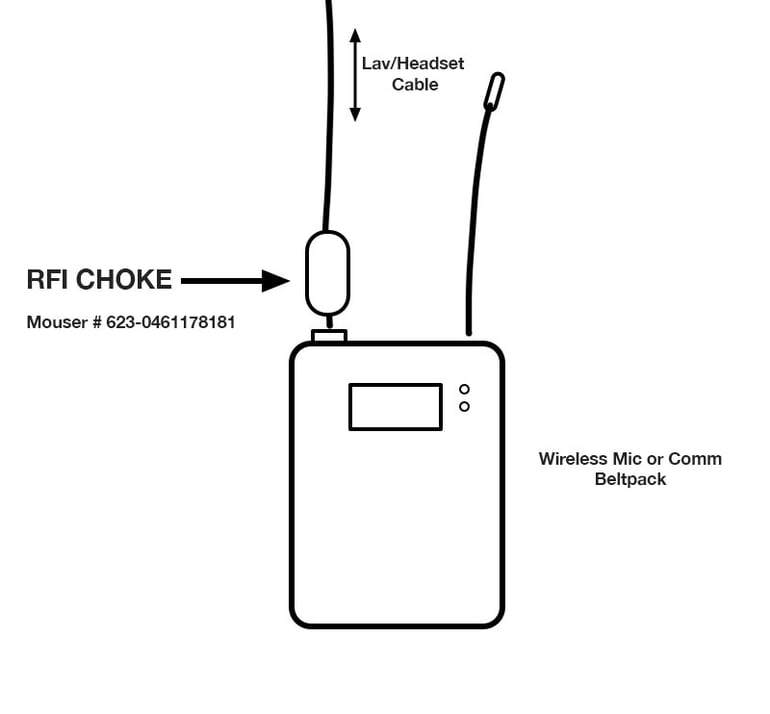 For XLR cables with outer diameters of about 9.5 mm, Mouser No. 623-0461167281 should work, placed anywhere an XLR cable connects to mixers, amplifiers, or rack equipment. 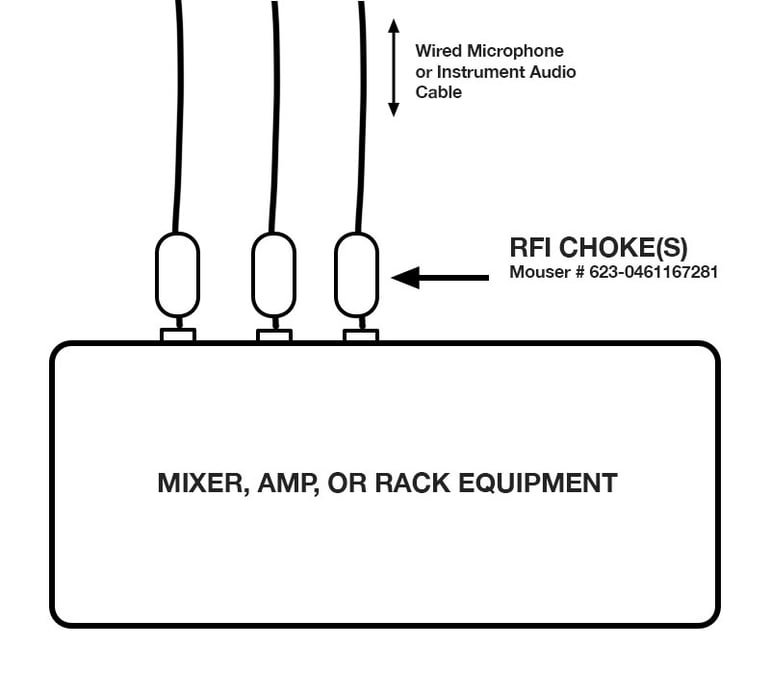 There are other diameter snap-on chokes available but make sure whichever you choose is tuned for high frequencies. The mysteriously named Fair-Rite “Material 61” seems to be the best match for GSM buzz. Other types of ferrite chokes and XLR connectors are not optimized for high frequencies and may not provide much protection against cell phone buzz. You can read more about the theory behind ferrite core suppression and Material 61 here.

This was not an easy question to answer. The internet is in wide disagreement on the subject.

I reached out to the always knowledgable Henry Cohen, RF Design Engineer at CP Communications.

“GSM “buzz” occurs with GSM (TDMA) phones,” he said. “It is when the phone is communicating with the tower on the GSM control channel, which is not power regulated and can be as high 1 watt, depending on the phone model. It is pulsed data bursts and does not happen on the LTE side (the reason CDMA phones remain relatively quiet).”

Phones using GSM standards cause most buzzing. Phones using LTE and CDMA rarely do. GSM networks are less common than they used to be, but are still ubiquitous, and even non-GSM phones may “step down” to other networks for various reasons.

The problem is not that GSM mobile phones are using the same frequencies as wireless audio equipment. GSM networks operate hundreds of megahertz above the top of the UHF broadcast band.

The interference is caused by the rapid rate of on/off signaling between phone and base station at cellular frequencies. If these “pulsed data bursts” are able to leak into the audio signal path, they are rectified by electronic components within the device, often by the first amplifier they encounter, which introduces false voltages at audio frequencies into the signal and, down the line, into audible interference when the signal is converted into audio by a speaker.

If GSM pulsed data bursts do not have an opportunity to enter the signal path, they will not be falsely detected as audio by any of the device’s components. That’s why ferrite cores are effective: they filter out GSM frequencies, and the on/off bursts never make it to the non-linear stages where their patterns are unintentionally converted to audio.

These bursts exist in the form of electromagnetic waves in close-proximity (what we call the "near-field") to the phone. They enter wherever wires or metals offer them the chance to do so. The most common entry points are lengths of unshielded cable, which act as antennas (gathering radio energy), damaged shielded cable, connectors, PCB boards, or practically anything made from metal that somewhere intersects with the audio signal path.

“The real issue is how audio equipment is designed to handle this radio interference. Properly designed and manufactured audio equipment that complies with AES standard 48 is quite immune to the GSM buzz.”

Cheap or poorly designed electronics are more likely to catch the buzz.

There is also a known gateway in XLR shielding called the shield current induced (SCIN) effect.