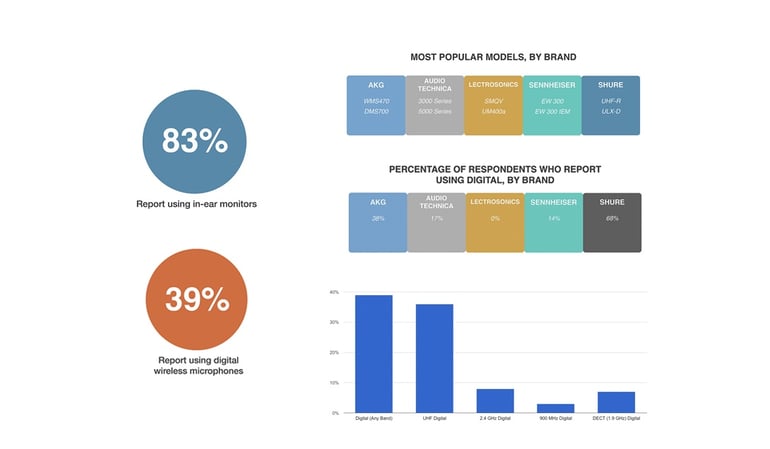 Last week, we sent a survey to RF Venue customers and Audio Gloss subscribers. Nearly a thousand people responded—far more than we expected—with all kinds of interesting information on how wireless audio devices are being used in 2015.

We came away with a much better picture of our customers, and of wireless audio users as a whole. We want to share some of what we found with readers.

The survey went to audio and A/V professionals who work regularly with wireless microphones, or who have an interest in wireless audio products, including our dealer network, and other partners who have purchased RF Venue antennas and RF distribution equipment direct from the factory.

Our customers are over-represented by A/V dealers, wireless audio “power users,” broadcast professionals, and system integrators, so we also sent it to our diverse audience of blog subscribers, most of whom have never purchased from RF Venue.

The first surprise was the ubiquity of in-ear monitors. About 83% of respondents said they work with IEMs.

This confirmed what we already knew, that in-ears have grown more popular in recent years, but we didn’t realize just how popular. It wasn’t long ago that IEMs pretty much lived on major tours. Today, local bands, small to mid-sized churches, and even pubs and small venues are upgrading from wedges to in-ears, or going straight from no monitoring to in-ears. Churches have really helped drive growth in the IEM market with contemporary worship styles that put lots of musicians up on stage every week in concert-like environments.

Aside from general device usage, participants also chose which of six wireless audio brands (AKG, Audio Technica, Lectrosonics, Sennheiser, Shure, and “other”) they use most frequently. Then, we asked which specific models of both mics and IEMs they use within that brand. Most professionals work with, sell, or specify a variety of different models (not just one), so we allowed respondents to choose multiple models.

Analyzing the multiple choice picklist gave us a fascinating look at the mixture of wireless audio technologies in use by our sample, as of this publication.

Some models were far more common than others. Here are the two most popular models by manufacturer.

We also learned what percentage of our sample uses digital modulation and in what frequency band.

39% of all respondents said they use at least one model of digital wireless microphone, with big differences in digital use by band and by brand.

The vast majority of digital systems reported were UHF: 36% of all respondents chose a digital microphone operating in the UHF band (470-698 MHz), with ULX-D accounting for the lion’s share. Only 8% said they use 2.4 GHz band systems. Even fewer picked digital systems using DECT (1.9 GHz) and 900 MHz band frequencies, 7% and 3%, respectively (We did not include intercom manufacturers in this survey, which might have bumped the 2.4 GHz and 900 MHz numbers up).

While we learned what percentage of our sample uses digital microphones, we still don’t know exactly how many digital microphones are out there. In September of last year we conducted a small poll of five large A/V retailers and distributors on digital mic sales by volume. We asked each to roughly estimate what percentage of systems they sold was digital, and how many existing legacy systems they thought were digital. The ballpark estimate was that 25% of systems sold today were digital, and 2-10% of existing systems (which actually gets us pretty close to the number we uncovered last week, but far from hard numbers).

Likewise, there may not be a correlation between a particular microphone model and how many microphones of one model are used or sold by a respondent.

For example, of those who said they use or sell Shure, about 70% said they use the top of the line UHF-R, more than any other model. Only ~30% of respondents said they use the more economical SLX. Does that mean by volume UHF-R outsells SLX by more than 100%? Probably not across the entire market, but within the context of RF Venue customers and Audio Gloss subscribers, who are disproportionately represented by wireless power users, possibly…

These percentages don’t necessarily mean that customers of one brand dislike the digital mics of that brand. They probably instead reflect the fact that some manufacturers have a lot more digital offerings than others. Shure offers a wide range of digitally modulated microphones, while Lectrosonics offers almost none.

Thanks to all who participated!